TD Jakes - Bigger Than You Think 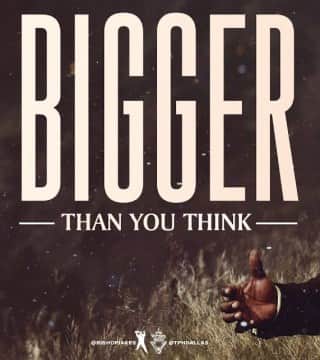 David does not know who he is yet, he's yet to realize the full strength and power of what he is about to be. David has not been recognized as being a king, he doesn't really understand the magnitude of his position. He thinks he's just an errand boy, he thinks he's just going down there to carry lunch. He has no idea he is going to be in the fight of his life; he would have prepared differently if he would've known he was going into battle, but he came down there to do a little thing but it was bigger than you think. David didn't know that he was walking into a battle and David didn't even know who Goliath was.

I wanna talk to somebody today that's in the boot camp of greatness. Oh, you're in the boot camp of greatness, because you're bigger than you think and you don't even know it, and God is about to blow your mind. Somebody logged on this broadcast today because God is telling you, I'm getting ready to blow your mind, shatter the way you think; shatter your perspectives and your attitude, shatter how you define greatness, shatter how you define responsibility, shatter what you call pressure. I'm exposing you to pressure because I'm building up your tolerance, because where I'm getting ready to take you what was pressuresome is gonna become your normal and I got to recalibrate you and train the way you think.

In the book of Ephesians chapter 3, verse 20, it reads, "Now unto him that is able to do exceeding and abundantly above all that we may ask or think," that God is able to do more than all that we may ask or think, "According to the power that worketh in us". In other words, God will not live in the jail cell of your mentality, he will not limit himself to be incarcerated by your ideas. In other words, God is about to blow your mind. He said I'm bigger than what you think, this day is bigger than what you think it is, this moment is bigger than what you think it is. Go ahead and get your little 10 loaves and get on your little camel and saddle up. And go ahead and put your little quilt of the back of the camel and ride on down to the camp, because you think this is ordinary but it's bigger than you think, because I'm able to do exceedingly, abundantly above all that ye may ask or think.

"My thoughts are above your thoughts, my ways are above your ways. As high as heaven is above the earth, so are my thoughts above your thoughts, and my ways above your ways". And just because it starts out small does not mean that it ends up small. That's why the Bible said, "Despise not the day of small beginnings," because whenever God's getting ready to do great things in your life, he tests you on small things. I said he tests you on small things. Until you are faithful over a few, you can't be faithful over many. Until you can be trusted with lunch, you cannot be trusted with giants.

Oh, I want to talk to somebody that can't be trusted with lunch, because you're holding out for the big thing, and when the big thing comes you're going to be amazing. Until then, you're just lazy and slothful and laid back and taking it easy, and you don't understand it is how you handle the little things that determines what's coming next in your life. Get your head right today, today-today-today is an opportunity for you to get your head right.

Look at your neighbor and say show up on time. Oh, my God. Show up on time. David showed up as the fight was starting, he was exactly where he was supposed to be when he was supposed to be there. That is absolutely amazing. The cataclysmic explosion of destiny and time collides when David jumps off of his camel and shows up just as the battle has gone into array and the Philistines have began to march out to attack Israel. David shows up at that exact moment because it was predestined, it was predestined, it was predestined. For generation to generation to generation, God has been setting things up. I don't know who I'm talking to but you're about to walk into something that God has been setting up for a long time.

So when David comes walking down to the battlefield carrying lunch, he thinks it's about the lunch. It's not about his lunch, it's about his legacy. It's not about the bread, it's not about the food, it's not about the cheese, that was just what God used to get you in the field of your destiny. Like your great-great grandmother was gleaning in the corners of the field, I orchestrated her to be over in the corner of the field so that Boaz would look out there and see her, and she would catch his eye. Had she been late, she would have never met him. God will put you in the right place and the right time because he's working all things after the counsel of his own will, and he'll cause you to love who you love and like who you like and meet who you meet and be drawn to who you're drawn to, because what God is doing is bigger than you think.

Now David is down here carrying lunch into legacy, and he gets down just in time that he can hear the hoof prints. Can't you hear the hoof prints? The hoof prints of the Philistines coming and they're coming out against the armies of Israel, and David is coming with his lunch. And he hurries up and checks his camel in for somebody to take care of his stuff and runs down to the battlefield, to talk to the men to see how his brothers are, carrying his lunch; but it's bigger than you think. Just when they see the army of the Philistines, out from the behind the ranks of the front lines of the army of the Philistines comes this giant named Goliath, and David happened, he happened, he happened to be there at the moment that Goliath was first presented?

And the Bible says in the 23rd verse, "And he talked with them, and behold, there came up the champion, the Philistine of Gath, Goliath by name, out of the army of the Philistines, and spake according to the same words: and David heard them". When Goliath came out there talking smack, David heard them, and now everybody heard them but the Bible doesn't mention who else heard them because they heard it but it didn't affect them like it affected David. When David heard him say that, David thought... Now, wait a minute now, wait a minute. "Who is this uncircumcised Philistine that he should insult the armies of the living God"? And so David starts asking questions, "What shall be given to the man," to the man, the kid asks the question, "What shall be given to the man that killeth Goliath"?

And it seems so crazy because David was so little and Goliath was so big, and now you have to grapple... When you have a great challenge and a small stature, the dichotomy between the two that have stepped on the stage is so wide that it seems insurmountable. How could something so little go after something so big? Somebody has got a great big vision and a little bit of money, somebody has got a great big calling and a little tiny church, somebody's got a great big dream and a little bit of help. The dichotomy between the smallness of the boy and the height of the giant is an opportunity for God to show himself strong.

There he stood with no training and no background, he wasn't even enlisted in the army, he wasn't even in the service but he made up in his mind, "I will fight you back, I will fight you back". And in spite of his stature, God brought him before the king. Your gift will make room for you and bring you before the king. Whoever heard of such a thing that a boy would be brought to the king as a solution to a national crisis? Over top of the whole army, they brought him this little boy and said this little boy down here is talking smack; while the army is running, he's talking smack.

Whenever you're close to your throne... I'm telling you what I know in my personal experience - whenever you're close to your throne, Goliath will always stick up his ugly head to fight you, he is always an alarm system that you're close to the treasure; Satan always leaves a Goliath to guard your treasure. When you find your Goliath, you have found your treasure. Wherever the giant is, that's where destiny is calling you, and when you see the giant, don't run from the giant, 'cause if you run from the giant you will run from your destiny. While everybody else was running away from it, David was running toward it because he knew that the giant was the key to the next dimension in his life.

Now hear me, I feel a prophetic influence coming over me right now. That Goliath that you see right now is proof positive that he's guarding your treasure. When you take him out, God's is going to open up something amazing for you. Don't run from the giant, run at him, run straight at him. Now you have to understand, they tried to give David Saul's armor, David put it on but it didn't fit. You can't fight your Goliath being somebody else, you have to fight your Goliath as yourself because it was you that God brought to the place; don't show up as a stranger.

And he made him a weapon, he made him a weapon. It wasn't even a slingshot, it was a shepherd's bag turned into a slingshot, it was a bag. It was a rag and a rock, and he ran down on that field and said what did you say? He ran down on that field, and the dichotomy was so strong that Goliath snickered, and laughed and said that all you got to send against me today? That little boy with that rag and that rock? That supposed to go kill me? What am I, a dog, that you send this kid down here to kill me?