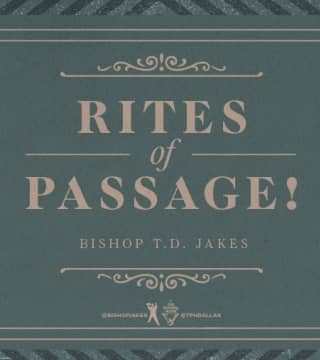 Our text is really about being on the threshold, because at this point in the text, David has killed Goliath. He's killed the lion. He killed the bear. Theologians think that he's about 22 years of age. God didn't let the giant come when he was 15. Thank you for the giants you held back 'til I grew up. Thank you for not exposing me to a giant level of troubles when I have a 15-year-old level of experience. You let me grow up to earn the right to fight on the next level.

And when I come into my text, it is precisely his ability to fight that has captured the attention of the king. Over all of the king's soldiers, David has captured the attention of King Saul. Saul says, "This boy is special". And David is standing, when I open up the text, he is crossing the threshold. And this is what the Holy Spirit said to me. Somebody that would be watching today is about to cross the threshold. You're right on the verge, the impetus of change. You're right there. A threshold.

See, everybody who came before you helped to make you be who you are. Their choices and their decisions created you in the first place. And when you cross over, everything behind you crosses over with you. Everybody who ever helped you, ever prayed for you, ever pushed you out to school, ever helped you with homework, ever trained you, everybody's about to cross over with you. And David is standing there. And the reason I bring up Naomi, and Boaz, and Ruth, and Obed, and Jesse is because David is not of the house of Benjamin. He is not from the tribe of Benjamin.

Do you have any idea how, when you come into a struggle, an unprecedented struggle, a huge fight, a Goliath of a fight, it's because more is at stake than just you. There's something coming down the line that's so important. It's not just that he's tryin' to stop you, he's trying to stop everything that's coming after you.

There's something about being at a threshold. When you're at a threshold, your spirit knows it. Your belly knows it. You'll know it when you try to lay down. Sometimes you can't sleep 'cause your spirit knows something that your mind can't figure out. You know you had the threshold. I wish I had a witness in here. I'd settle for three good witnesses in here that know what it's like to be on the threshold. When David stepped through that door, Pastor Dobbins, when he stepped through that door Saul shut the door. And the Bible says in verse 2, "And from that day forward, Saul kept David with him and did not let him return home to his family".

When the door shuts, it's over. No need in crying about it. No need in fussing about it. No need in bringing it up anymore. No need in getting angry about it. God just shut the door. You'll never be who you used to be again. Tell the sheep you won't see me again. Tell the goats you won't see me anymore. Tell the farm I won't be back. Tell the barn you'll operate without me. I am coming into another dimension. And David has all the bittersweet feelings of letting go of his past. The opportunity in front of him is so big that he has to be willing to go through the door. And God has prepared a table before him in the presence of his enemies, but it is a table for one. It is a table for one.

And he looks at David and this strange love comes upon him. I say it's a strange love because he has not known David. It's an instinctive love. It's an overwhelming love. And all of a sudden, Jonathan takes off his robe. "Your robe, prince? Your robe that defines you as royalty? Your robe that identifies you in the court as a king's kid? You're gonna take off your robe? You're gonna take off your robe and give it to me"? This is where he begins to strip himself. This is the rites of passage. He takes off his robe and he gives it to David, who is dressed like a peasant.

And then he takes off his garments, his tunic. He lets David see who he really is underneath everything. You cannot cut covenant with somebody who's not willing to show you who they are up under all the tapestry. Oh God! Oh, if you're not willing to show me who you really are, we can't go any further. This is the rites of passage. And if your pride is more important than my position, we gotta stop right here because I got to see who you are. And the prince takes off his tunic, and he takes off his belt, the thing that holds everything together, and he gives it to David. And his bow means, "If you ever get shot, it won't be me". And his sword, "I'm defenseless against you. You've seen all my secrets. You know who I am". And this is the rites of passage.

And this rite of passage is a type of the cross because Jesus stripped himself. He stripped himself. I was naked. Jesus stripped himself that I might be clothed. And he that was rich became poor, that through his poverty, he who was poor might be made rich. He who was healed took my sickness, that as he took my sickness, I could wrap up in his healing. He who was holy took my sins, that I might be dressed in his holiness and that he might die for my sins. It is the rite of passage, the turning point, the crossover, the flip, the role reversal, the change. And all of a sudden, the stripping has come.