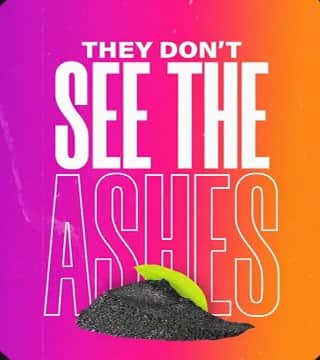 When God sat down on their efforts, that's what I want God to do. I want him to anoint what I'm working on. I want him to anoint what I'm doin'. I want him to sit down on what I'm tryin' to build. I don't wanna build it if he's not going to sit down on it. When God's glory fell down on the temple, all religious order stopped. The priests stopped doing what they were doing. All the Levites were standing there in awe. They were ready to play the instruments that David had created. David was so creative, not only did he play instruments, he made instruments, and the instruments had now outlived him. And now we're seeing the second generation of Levites that are continuing the legacy of the music of David who has gone on, and yet his songs are still filling the air.

Whenever you see God form a thing, he will always fill whatever he formed. What we are looking at in this text is that that opiate, that moment, that crystallised, stellar, significant, unforgettable moment when the divine touches the human, when the celestial touches the terrestrial, when that which is above us comes and sits down amongst us, when grace and truth are met together, when mercy and peace have come together, when the holy and the human collide in an exodus of praise so powerful that it crescendos all through the chapter. It was so strong that Solomon got scared he might lose it.

I want to talk to every son who had a failed father. Out of the ashes of a failed father came the glory of the next generation. Stop despising your father's ashes because everything you're gonna build is going to be built on the ashes your father left behind you. Solomon only owned the land because David paid full price for it. And David was wrestling with his own sins, and yet his sins and the place he wrestled became the place where Solomon erected the first temple. How much of your success is built on your ashes?

Oh, y'all don't hear me. I feel like praising him right now. I've been through too much. I cried too many nights. I suffered too long. I questioned myself too many times. I almost gave up, but people don't see. They don't see the ashes. They don't see the ashes. All of that glory that was so strong that Solomon had killed thousands of sheep just to honor God on the space, and people did not recognize that the magnitude of his sacrifice, his giving, his flowing, his sowing provoked the presence of God. And God's glory sat down on the sacrifices of Solomon. You could see Solomon's sacrifice. You could see it. You could hear the blaring of the sheep. You could hear the sound of the oxen. And it makes sense that God would sit down on Solomon's sacrifice.

The reason you can't get God to sit down, you don't have no sacrifice. If you give God a sacrifice, he'll sit down on that sacrifice. And I looked at her and I said, "Oh God, I see you sitting on Solomon's sacrifice". And God said, "Yeah, not only am I sitting on Solomon's sacrifice, I'm also sitting on David's ashes. I wanted David to know that your mistakes were not in vain. Your failure was in the plan. I knew you would mess up. I knew I would have to chasten you because you're my son. I knew it would drive you to the threshing floor of Ornan. I knew you had too much integrity to let him give you something for nothing. I knew you would pay full price. And because you've paid full price, that same spot that you paid for, I will allow your son to reap a blessing".

Stop crying about what went wrong, because God will take wrong and make it right. God will take pain and make it power. God will take problems and build solutions, and out of the ashes of his father. Look up under your feet. Somewhere up under your feet are the ashes of your parents. Their mistakes, as well as their miracles, created an opportunity for you to hunger like you hunger. If you'd got everything you needed when you needed it, you wouldn't have had enough hunger to be who you are right now. I'm not saying that they always did it to bless you, but even if they meant it for evil, God made it good.