TD Jakes - The Loyalty of God 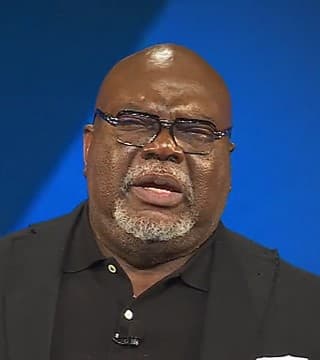 And the reason I'm sharing it with you today, because, just as turbulent as times were in Rome, just as indecisive as the times were in Rome, that same in decisiveness exists today in our country and other countries around the world where you don't know from day to day what's gonna happen; this one fighting against that one. In fact, Rome was on the brink of civil war, a civil war where there would be fighting between traditional Jews and the Roman Empire that almost split the country. And now, at a tribal time in our country where everybody's mad at everybody and everybody's fighting about everything, and everybody is at war with everybody else.

It's one thing to disagree, but now we hate people that are not on our team, that are not on our side, and you wonder if we're not going to run into what Rome ran into. Internal corruption ended up destroying the Roman Empire, and when I look at America today, I wanna talk directly to America today, you're on the brink of total destruction, not because we have disagreements but because we have disloyalty and disjointedness, and because we have divided, and "A house divided against itself shall not stand". It is in the midst of that division that God sends a Word.

I love God because God doesn't need a perfect situation to send a perfect Word, he'll send a Word into a chaotic situation, he'll remind you that he's still God in the midst of it all. And I wanted you to understand that Rome was going through what America is going through, what other countries around the world are going through, anarchy and deceitfulness and betrayal and denials and uncertainty. And every day you woke up in Rome you didn't know what was gonna happen next, and still, in the midst of all of that, God was still faithful. He had not cast away his people, even when his people cast him away. For the Bible said that, "Jesus came unto his own and his own received him not," but in spite of the fact that they did not receive him, God still had a commitment to be loyal to them. In fact, one writer says that God is married to the backslider.

I want to talk to somebody who's drifted away or turned your back on God and gone into another direction and now you're guilty and full of shame, and you've done some things of which you are ashamed of. You've had an abortion, you've had a baby out of wedlock, you've gone this way or that way into perversion or idolatry or other religions, I want you to know that God is still right where you left off and you have unfinished business with God. This text is about unfinished business with God, that "God is not slack concerning his promise as some men count slackness," he's still waiting on you to come to yourself, and that God has not forever cast you away.

I know the devil wants to tell you that God has cast you away, I know the devil wants you to feel hopeless so that you'll have an excuse to go further and further into your own degradation, but the devil is a liar. God is still right where you left him, ask the prodigal son if the father won't out-wait you. He'll stand right where he stood and say you're still my son, and I still love you and I'm right where you left me, and if you'd come to yourself I'll bring you up out of the muck and the mire.

The person who promised you love on Wednesday has got your divorce papers on Tuesday. You don't know what's gonna happen from day to day. The company who said they appreciated you and let you go next week, you don't know what's gonna... God said I'm not like any of them, I have not forgotten you because I foreknew you. I foreknew you like Jesus foreknew John before he met him in the Jordan River. He had met him in his mother's womb, the babies had leaped when the women had kissed, they were filled with the Holy Ghost.

At this point in the text, he begins to teach the people of God to understand from a 40.000 foot view that God has a plan for his people. And he weaves through out the book of Romans the plan of God, talking first about the Gentiles, and then about the Jews, and weaving it together. And about chapter 3 or 4, he concludes them all in unbelief and makes both the Jew and the Gentile come into one door, and that is the door of faith. Why do we come to God by faith? because if we came by facts we'd have to have intelligence in order to come. He had to fix the door, where the illiterate and the intellectual would come through the same door.

I'm proud of your degrees, I'm proud of your accomplishments, I'm proud of the many accolades that have been bestowed upon you, but you don't get to God because you're smart. You get to God because you believe, and if you believe God it is counted unto you as righteousness. If you're going to impress God, it's not your money that impresses God, it's your faith. Without your faith, it is impossible to please God; that's the text we have before us today, that's the texts we have before us. The common denominator that brings both the Jew and the Gentile rushing through the same door, "There is therefore now no condemnation to them that are in Christ Jesus, who walk no longer after the flesh, but after the spirit".

That's the God that we're talking about right now. That's the God that's before us in this text, who's faithful when you are foolish. I said he is faithful when you are foolish, I know you need to act like you've never been foolish, but the truth of the matter, there's not a person listening at me right now who has not been foolish and walked in your own way, and walked away from God and did your own thing, and had to come stumbling back to the cross asking God for mercy and he was right where you left him. He was there all the time, he was there in your pain and in your suffering and in your agony.

God has not forgotten, the Bible said, "God is not unjust to forget your labor of love... in that you have ministered to the saints, and do minister;" that God remembers when other people forget. God has not forgotten, you know why? God is loyal. God is saying I am still with you. "Seek the Lord while he may be found, call ye upon him while he is yet near. Let the wicked forsake his way, and the unrighteous man his thoughts". I am not like your father, I will not abandon you, I will comfort you as a hen gathers her eggs, I will comfort you. I'm fighting against the feeling of abandonment.

And I want to talk to some people who feel alone; alone in your house, alone in your apartment, alone by yourself, alone in your marriage (yeah, you can be married and still be alone), alone in your ministry, alone in your faith and you feel abandoned and forsaken and you're by yourself. That's what made Elijah run and that's why Paul brings him up in the text. Elijah was running from a feeling, it wasn't just a woman, he said I'm running because I'm alone and I'm by myself. I killed the prophets, I got the victory but what good is victory if I'm abandoned?

I want to talk to people who have great victory and you feel guilty because you're not enjoying your victory because you feel abandoned and you feel forsaken, and you thought victory would be better. And you got the job and you got the house and you got the car, and you've forgotten how blessed you are because none of it brought you the joy that you thought it was going to bring you. And there you begin to recognize the house is just a bill and the car is just to note to be paid, and all of a sudden you've got all of this stuff but you're wondering why you're running. You're running because you feel alone.

We're talking about the loyalty of God and we're weighing it against the feelings of men, and the feelings of men says, "I am alone, and I am abandoned, and I am forsaken, and I am here by myself," and the loyalty of God says, "That is a lie, I've got resources you haven't touched yet". And to somebody listening at me right now, I'm calling on a revolution in your mind, to stop coming to God talking about how you feel and start talking to God about who he is.

Stop going to God and talking about, "I feel like quitting, I feel like giving up, I feel like walking away, I don't feel appreciated, I don't feel". This isn't, you don't come to God by feelings, you come to God by faith, and in order to have faith you gotta start talking God-talk. You can't be talking man-talk, you gotta talk God-talk. You can't be telling God what's wrong, God already knows what's wrong. If you're going to come to him, you gotta come by faith. Stop whining to God, God is not your therapist, God is not your counselor, God will know when you were potty trained, he doesn't need to know when you were potty trained.

Oh, y'all don't hear what I'm saying. God, God, God is faithful, he's consistent, he's loyal, he's immutable, he's everlasting, he's eternal, he's God. He's wonderful, he's the counselor, he's a mighty God, he's a Prince of Peace, he's the Everlasting Father, he's the kinsmen, he's a redeemer, he's a daystar, he's a trumpet, he's a shield, he's a buckler. Excuse me, he's the Lily of the valley, I thought I'd pick him up, he's the bright and morning star. He's my hope in the middle of hopelessness, he's my joy in the middle of sorrow, he's my peace is the middle of confusion.