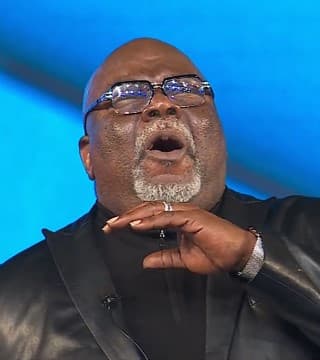 Take the chicken, for instance. The chicken is happy to be a chicken with his short little wings and his big fat body and his skinny little legs. They don't need therapists, they don't need counseling, they don't have emotional disorders, they don't have breakdowns, they don't cry. They walk around on them little bitty legs as happy as they can be, they jump and fly about 3, 4, 5 feet into the air, fall back down to the ground again. They know who they are, they're in a class all by themselves. You don't see any other bird any more popular on the cuisine on the restaurant list on the table list. And the chicken is in a class all by himself. In demand all over the world, from Japan to Jamaica.

The chicken is in demand. He is always in demand, but he is nothing like anybody else. He's not like the eagle, for example. The eagle, who is majestic and powerful and spreads his wings. The eagle's wings have a nine-foot span from tip to tip, he's able to spread his wings as if he is a god-made jet. He flies faster than any bird, he goes higher than the chicken would ever go. His eyesight is so keen that he can see miles away in the storm and in the dark, and he functions on another level. They mate in the air, they make love in the air, they lay their eggs in the high places.

And as long and as bright and as brilliant as the eagle's wings are, and as high as he can fly, his beauty cannot be compared to the peacock, who spreads its wings in the middle of mating to attract its mates, to show how beautiful its feathers is. His back is straight, his head is held up high. It may not fly like the eagle and it may not taste like the chicken, but it has amazing wings. And each of them, though they are the same species, they were created to play a different role. All of them have attributes and liabilities, but they know who they are and they are happy to play their role.

Can I get after this? 'Cause I wanna get after this, 'cause I'm tired, I'm tired of shouting saints who get happy but ain't happy, who dance but have no joy, who cry but have no peace, who shout but have no power. And the reason you don't have any power is that you have never learned how to maximize your potential on your level. God didn't promise to give us all the same stuff. Some he'll give 30, and some he'll give 60, and some he'll give a hundredfold. And to one man he gave one talent, and to another one he gave two, and to another one he gave five. God did not prepare, did not say that he would equip us all the same. He says to us, "I gave you what I gave you, and the only thing you have to give an account for is what the lines I gave you and the script I read to you and the only thing I'm asking you to do is play your role".

There are two different Johns. John the writer is one of the sons of Zebedee, described as the son of thunder. His mother, Simone, is said to be the sister of Mary, and John the writer is said to be a cousin of Jesus. And now we understand why he lays on Jesus's breast, because he was a young protege, younger than Peter and the rest of them. That's why he outran them when they went to the empty tomb, because he was young, when they were getting older. That's why he outlived him and ends up out on Patmos, writing, and dies of old age. And he's not martyred the way the rest of them were, because we're talking about John the writer. But John the writer, immediately in the first chapter, introduces us to John the Baptist.

You'll never find fulfillment until you learn to walk into the joy of how you are created. Even if you quack like a chicken, you gotta learn how to walk around in the barnyard and quack and crow and make your noises and be happy to understand, I'm doing what I was created to do. If you spread your wings like the eagle and soar in the air while the wind is up under your wings, you can't be lookin' down at the chicken sayin', they want their eggs more than they want mine. Or even if you walk around in the forests occasionally spreading your wings like the peacock and catching the attention of people, even though you don't fly at all, you know who you are.

And here's my final statement. John, who seems so humble and knows his role and is so cool to be in this role and says there's one coming after me who is mightier than I, he's talkin' about Jesus. Not long after he introduces Jesus, he has fulfilled his purpose and he dies, because he has done what he was created to do. That's why you die, because I have done what I was created to do. And when he had done it, he died. And the guy who was greater, Jesus, is now preaching the eulogy of John the Baptist. And Jesus is the one that John the Baptist said was greater. But when Jesus preaches John the Baptist's funeral, he said there is none greater. There is none greater amongst all the prophets than John the Baptist. None!

And I want to pray for you, because the Lord said to me that if I would preach this message, he would minister to people who have been tormented by the success and accomplishments of other people, comparing themselves with other people. You have missed great moments of joy and peace and contentment because you're not happy to be the rooster, you wanna be the eagle. Or you're not happy to be the eagle, you want to be the peacock. And as long as you torment yourself, Satan won't even waste the devil on you, because you are your own worst enemy 'cause you don't know your role.

And I want to challenge you today, that today we break the curse, today we break the struggle. Today we break through the struggle that has tormented you all of your life. Today we break all the things that were said to you that compared you with your sister and compared you with your brother and made you always feel less than. You've always been fighting from a disadvantage because you were cursed as a child to feel insecure and inferior. And the Lord sent this Word to you, to break through all those other words that have ever been said about you. God said you're not a failure, you're not a mistake, you're not a mishap, you're not a less-than. You were created for a divine purpose, and everything you need to fulfill that purpose you have.

So stop prayin' for bigger wings, 'cause he didn't mean for you to fly. And stop praying, eagle, for more colors, 'cause where you are in height, nobody could see 'em anyway. You have to understand why God gave you what he gave you, and to just know your role. Jesus says there is none greater than John the Baptist, because rarely in this life do you run into anybody that has the confidence and self-esteem to just know your role and to be happy to be what God created you to be.

As I close today I wanna pray for secret torment. I don't want to pray for the eight o'clock in the morning you, I want to pray for the 1:30 a.m. you that lays in the bed at night wondering am I enough? I want to pray for the scared you and the worried you and the tormented you that keeps looking at other people's feathers. God said it stops today. God said today is the day that you step into the fullness of who you were created to be, and you simply know your role, and you are happy. If you're a background singer, you're a bad background singer. If you're a lead singer, you're happy to be a lead singer, but you're not tryin' to be a worship leader. If you're a worship leader, you're not tryin' to lead the solo in the choir, because you know your gifting and you know what God has given you.

And for once in your life, you're 50 years old, and for once in your life God wants you to be happy to be you, and to be the woman or the man or the preacher or the teacher or the son that God created you to be without measuring your feathers against your brother's. You have to do what God put you in the earth to do, and let somebody else come along, and let greater come all it wants to, because you cannot beat me. Nobody, hear me good, nobody can beat me being me. There will never, ever be another me. I am the one. I am the one. I am the one whom Jesus loved. And so, ah. You, little feathers and all. Pretty wings, but I can't fly and all. Broken feathers and skinny legs and all.

Are you not the one whom Jesus loved? And why aren't you happy? Why are you not living your life to the fullest? Why are you so easily intimidated and tormented? Measuring your feathers will drive you crazy. And the Lord said in the middle of this pandemic, while we have time for self-evaluation and introspection, that God wants this to be a healing moment in your life. God wants to break your ruler, your yardstick, and stop you from measuring feathers with whoever is comin' along next. And God will put you in the company of great men if it doesn't make you feel small.