TD Jakes - How to Get Over Yourself 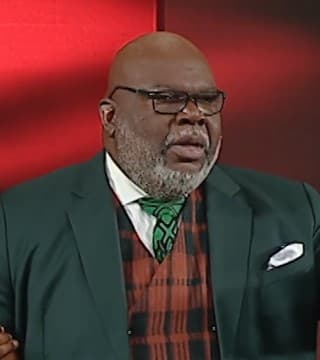 This is the hard part, when you're stuck in the middle and you gotta go and attack the future, and you know how to attack the future 'cause you attacked that back there, you're a fighter but it's hard to attack what's next when what was last left you depleted. We could be facing the right thing at the wrong time, and I'm telling you, I don't have nothing else to give, you see, I'm empty. And the Lord told me to share this Word, he said I want you to talk to my people because a lot of them that I have something for are not prepared to receive it. It's not that I have not ordered a future for them, they're not prepared to grasp it because they are so weary from what they've been through that they don't have the strength, and they are wondering, "How in the world am I gonna fight what's in front of me while I weep over what is behind me"?

Now it's easy to forget the bad but sometime you gotta forget stuff you love that you had to kiss goodbye. I wouldn't have kissed her if I hated her, but I still got to forget it because I don't have the strength to carry that which is not assigned to my future. Some things are assigned to your past that are not assigned to your future, and I'd shake you too if I could, I'd shake you too. I'd shake you til you understand. When you get bitter, you don't just shake off the bad, you shake off the good too. And I shake her off like Elijah shook off Elisha and told him to go back, but every time I shook her she stuck to me.

The Lord told me to tell you some of the stuff you're trying to shake you gotta take it with you. If they'll let you shake them they wasn't for you, but if you keep trying to shake them and they won't be shook, it's a sign that God is about to... Oh, y'all don't hear what I'm saying to you. He told me to tell you, until you get over yourself you're going to feel like a failure. The only thing that failed was what you had in mind, and it took God all of these years to kill out what you had in mind so that you could discover why he put you on the earth to begin with. It was not what you pictured for yourself. But it was what he has ordained for you to do, and you have gone as far as you can go by yourself.

No, don't clap, don't clap 'cause you got to open up that old stony heart that don't let anybody in, that scary place that you don't let nobody in because of all the stuff you went through back there; you are shut down like Fort Knox. You smiling at people but you're not present in the moment, you're so excited about the future that you're ignoring where you are. People who are shut up in the present are always either talking about the past or the future but in order to get what God has for you, you have to be here right now in this moment holding onto what you got, not what you lost, not what you hoped to get, but until you seize now you'll never have tomorrow. And it ain't easy to open up your heart to Ruth when you just kissed Orpah goodbye, you know why it's hard?

In the back of my mind, the reason I kept sending you away, it wasn't that I didn't want you, it wasn't that I didn't need you, but I thought, "Wilt thou leave me also"? See, I can't take another heartbreak, and I was afraid to let you in in case you left. You'd be shocked at the people who have stopped living and stop loving and stopped caring and stopped trying because of what they've been through, but you are helping me to see. You think you followed me so that I could teach you but you've taught me. You taught me, Ruth, that my life isn't over, it's just changed, that my purpose is in you and not in me.

Now, where I'm going to take you is my country but it's only been your message, so you're gonna feel like a foreigner and an outcast and an immigrant and a stranger. And you're not gonna look around and see people who look like you 'cause you left all the Moabites back there, but if you're willing to be a minority, if you're willing to be an immigrant, if you're willing to step into a new territory and feel a little bit out of place God got blessings for you that will blow your mind, he's got blessings beyond your wildest dreams. God is about to adopt you into something so much bigger than what you ever saw in all of your life, don't you run from this, this is your opportunity to step into it.

God's getting ready take somebody in, I don't even know who this is for, if you are willing to get out of your comfort zone, if you're willing to get out of yourself, if you're willing to give up on what makes you feel comfortable and makes you feel accepted and makes you feel loved. And you know why I can tell you to get over yourself? It's 'cause I had to get over myself. You ain't gonna get it no cheaper, you're not gonna get it any cheaper. Now we eat different foods and we wear different clothes and we have different customs that don't even make sense, but if you're not stubborn and if you'll listen at instructions, I'm going to show you how to win in a new place.

There is a man who owns the field you've been gleaning in, his name is Boaz, and you wait till it's late in the evening, don't go in the morning, go in the evening when he kind of sleepy, and I want you to lay down at his feet and when he wake up, just say, "Cover me with your skirts". That sets him off girl, that sets him off. You see, what the Bible is actually telling us is that the Holy Spirit has talked to us about a Jesus that we have never met. And in spite of all the instructions that have been given to us, we have never met him, and it is teaching us how to come into covenant with Jesus. That in order to come in covenant with Jesus you don't come to his head 'cause you're not above him, you don't come to his side because you're not equal with him, but if you come down to his feet everything you will ever get from God will always require that you get down at his feet.

You know why God always blessed the prophets that he blessed, his only begotten son that he blessed? Jesus didn't go to the cross for him, God blesses people who do things for you and not for themselves. This is not about you and some score you need to settle, and some mountain you need to move, and something you need to prove to your dead auntie. You've got 12 1/2 hours to figure out, give me that music again about kiss and say goodbye, real soft. It's funny but it's true. The reason I wanted to use this song is because when you talk to church folks about saying goodbye they always shout, 'cause what they shouting about is saying goodbye to stuff you didn't want anyway, but the thing that moved me about the verses I read is it was a whole lot of kissing going on, it was a lot of kissing and it was a lot of goodbye.

I've never met anybody who was incredibly successful at anything who wasn't incredibly crushed in some way. I've never met anybody who was tough and angry and fight back, and whether they were in the street or in the boardroom, it's always to protect some little broken disappointed little thing down inside of them. But hear me well, for where God's getting ready to take you, you have to kiss that pain goodbye and trust that what's in front of you is stronger than what's behind you. Squeeze that hand.