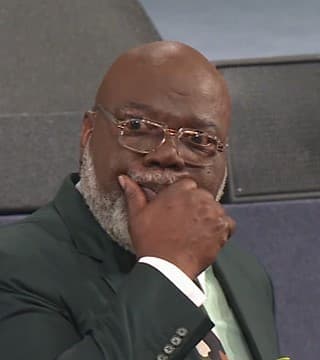 The wheat is being beat down to fruit, all the chaff is being beat away so that the wheat falls to the ground, and whenever God puts you in an uncomfortable situation he's sifting you. What matters, what doesn't matter, what's real, what's not real, what counts, what doesn't count, who I can have, who I can live without. Where my real people at? Holler at your boy. You go through these periods where you get stuck in this wine press and he starts shaking away stuff that you thought you had to have.

And here comes a call, a high calling, a divine calling, a supernatural calling that has classified information about me that I don't have on myself, and the angel is speaking out of his knowledge of how I was designed and I'm living out of my knowledge of what I grew up around. And I have to decide, in this struggle, which one of these entities is gonna win this fight, what I grew up around or what I was created to be, because one of them are going to determine what the trajectory of my future looks like. Who am I preaching to?

That's what it's like coming to this church sometime, 'cause everything all week long says give up and die, and then you come here on Sunday morning and I'm telling you, you are the head and not the tail, you are above and not beneath, you are more than a conqueror, you can do all things through Christ which strengthens you. God didn't bring you this far to leave you, God didn't take you through everything you've been through for you to get here and die in the wine press. I came to tell you something.

Gideon dropped his wheat, Gideon dropped his wheat because somebody called him a warrior and it made him know that he was more than what he was doing. And after wrestling with God and struggling with God and putting fleece before God he started living in the middle of his life, because life doesn't begin when your mama pushes you out, life begins when you find out who you are. Life begins when it hits you in the back of your head, "I'm better than this, I'm bigger than my circumstances, I got a destiny and a purpose on my life. God created me for a reason, he called me for a purpose, I am in this world to do something". Who am I preaching to in here?

And Gideon doesn't even know that he's gonna be in the book of Judges, he doesn't know that he is going to lead the army that drives out the Midianites, renders helpless the Amalekites; that he is going to take less men and kill more people with less men than we have ever seen done in the history of the Scriptures, if he can get out of this pit. And somebody in this room, you are one pit away from supernatural purpose. And the Lord told me that if I would preach this message this morning it would wake somebody up to get up out of that pit, that they would come into another understanding of who they were, that God would do something amazing in their life.

God told me, if I preach this message this morning, somebody would drop their wheat and grab their sword, and stand up on their feet again and understand who they are. Who am I preaching to this morning? You got something to do in this stage of your life that is greater than anything you have ever done in your entire life. In fact, everything in your past was getting you ready for what you're about to do in your life. If I'm preaching to you make some noise in this place, make some noise in this place. Yes! Yes, yes, yes!

So this is where we're at right now: the anointing of God is in this place, the Spirit of God is here, the glory of the Lord is in this place, the Lord has you here for a reason, there is something that God is getting ready to do in your life. There's something that God has for you that's important, and I'm telling you, not knowing is a problem, not knowing who you are is a real problem. Living your life according to what other people said about you is a real problem, living your life based on your net worth is a real problem. The message is called, "I Didn't Know I Was Me". Lord, have mercy, I feel like I'm supposed to preach this today, I feel like I'm talking to somebody today, I feel like the Holy Spirit is pushing in on somebody today.

Before God formed you in your mother's belly he knew you out of the millions of sperm cells your father shot into your mother. Before you ever read a Bible, one cell out-swam them all. The odds were against you before you got here and when you were on a cellular level you out-swam the rest, that's how you got here, that's how you started. Sometimes, when you come from eternity, in the time, you don't remember who you were before, but in services like this, where God calls you and he makes you know things about yourself that you didn't know, this message is a confirmation.

Jan, I was the last person to know I was T. D. Jakes, I didn't know that. The books were being translated into different languages, I didn't know it, I saw it but I didn't see it. The stadiums were full, people fighting outside trying to get in, I didn't know I was me; I don't like saying it because it makes you sound stupid. I was on the New York Times Bestsellers List, it still didn't add up to me that I was me. I think sometimes grace puts blinders on your eyes. I could see all of you, I couldn't see me but there was a nagging voice in my head that was correcting damaged thinking, honestly.

And I learned something as I got older, I didn't know I was me because I was afraid, winning has so much responsibility to it. Losing is easy, all you have to do to lose is just let go, nobody expects nothing from you, nobody demands anything of you; sometimes you're afraid of what God has next for you. And I'm being transparent because I'm after something and I don't even know who it is. Most of the people who wrote about me had never met me and they wrote about a person that I didn't even understand, they wrote about how they would feel if they were me. I didn't feel like that, 'cause I didn't know I was me.

I'm telling you, I was playing the piano for people, loading their cars with bags and driving them around, I didn't know I was me. That doesn't mean that it should've happen any sooner because I think it is the menial things that develop you, I think it is the blind spots that give you focus. I'm trying to rush the process, I'm just trying to describe a place you might be right now. All I knew is that whenever I got around something that had my destiny in it I was drawn to it, I was attracted to it and I would do anything to be in the room with it, and I admired it but I didn't think I'd ever be it 'cause I didn't know I was me.