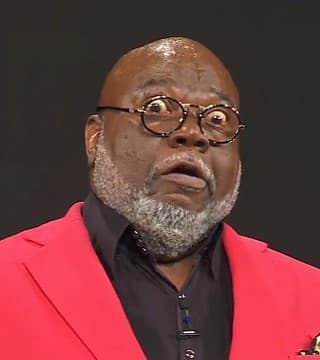 God help the innkeeper that tells me you don't have room. You don't have what? You mean to tell me, after 90 miles and 7 days, that I finally got there and now, what do you mean don't have room for me? How you handle rejection determines whether you will be successful in life. Rejection. The point of rejection, it's the place where faith is proven. Oh, y'all got quiet now. Y'all were shoutin' with me pretty good but I lost you. Rejection is the magnetometer that you must go through to prove that you can take the flight that God's about to put you on. Until you master your ability to cope with no. He who would be defined by rejection is rejected before he is ever born.

And this is a crisis, and it brings up every negative thing that has ever been said about you in your whole life. All of them rehearse themselves as you walk back to the donkey tryin' to figure out how you're going to explain to her that your best plan didn't work. And she's crying and cramping and craving, and any minute her water will break. And all I have for you is rejection.

I want to talk to people who wither inside. The term dysphoria comes from a Greek word to mean unbearable. Because the pain is unbearable. It'll make you go in the house and not come out. Rejection sensitive dysphoria will make you procrastinate from trying for fear of rejection. You would rather not know that you could lose than to risk having this feeling again. Rejection sensitive dysphoria comes in the lives of people, they do well for a while but then something happens and triggers it. And when that triggers in them, they go into this painful, dark, dank, angry place where you don't hear I don't like your dress, you hear you're ugly and you're stupid and you are nothing and you're never gonna be anything.

Rejection sensitive dysphoria makes the rejection sound louder to you. And what attracted me to the text, is not the door that opens, it's the door that closed. And the reason I'm attracted to the door that closed is that you will never find your open door til you can manage, until you can see rejection and not take it personal. Because after all, it's not about we don't like you, it is that somebody got there before you and there is no room in the inn. So why are you freaking out like you are not valuable? I would've took your money, but there is no room in the inn. But when you are rejection sensitive dysphoria, it's not about practicality, it's about how you rationalize rejection.

Oh, can I talk to you today? And so I feel unwanted and not valuable, and I can't rationalize the fact that you only had seven rooms and you got 14 guests in 'em. There just wasn't any room in the end. I wanted to talk to you about rejection because Christmas brings rejection up loud. As you turn on your TV and everybody's layin' on a bear rug in front of a fireplace sipping some chablis and you in the house with your dog. Rejection screams the loudest when you're supposed to be happy, but you can't be happy because your daughter don't even like you. And every time you go in the mall and you see mothers and daughters shopping, a dagger goes right in your chest because I was the best mama I knew how to be, she don't even like me.

Or you see those kids running in, talking about how good their mama was, but your mama wasn't. And the holidays are not great for you because there's no room at the inn. In fact, you didn't get invited to the party and they purposely avoided inviting you to things that you should've been a part of and you were left home to wrestle with rejection wonderin' what they're doing. Wonder what they doing right now. Wonder, wonder, wonder what they cooking, wonder, wonder who's there, wonder who's laughing, wonder who's holding him, wonder. Rejection sensitive dysphoria is not about the doors that open, it's about the door that closed.

See, sometimes you gotta bring your loftiness down to reality, because what you had in mind may not be what God had in mind. But God wouldn't have brought you out here if he didn't have a place for you. I see something. Watch this, y'all. He stumbled up on it. it was kinda like a, it was kinda like a barn, but it was something. It was something. And the Bible says that there were shepherds out in the field keeping the sheep safe. So it was safe. Safe enough. Watch this, this is a powerful thing. What I'm about to say is a powerful thing, especially if you have rejection issues. Safe enough to be vulnerable.

See, it's hard to be vulnerable if you don't feel safe. So they found a place. It wasn't elegant, it wasn't fancy, nope, nope. No nice beds and nothin' like that, but it was safe enough to be vulnerable, to go into the birth position. You can't have a baby and be running. So, baby, baby, I know it's not fancy, and there's no room service, and nothing like that, but it's safe enough to be vulnerable. And they brought him into this old barn. And Mary is in the barn. And there are three things in the barn. There's the manger, the milk rags, and the men that watched. In the barn there is a manger. And the word manger comes from a Latin word that means to chew. It was a trough for feeding animals, but they said the baby will fit nicely into here. So the manger became a cradle.

I got one more thing to tell ya. All while they were traveling the 90 miles and the 7 days, God had sent a word to the wise men that said go til you see a child laying in a manger. If he'd have been laying in an inn, he'd have missed his blessing. The Bible says that the wise men had frankincense, myrrh, and gold. And I don't know who I'm preaching to, but if you had not been rejected, you'd have missed your blessing, because the blessing isn't coming to your hotel, the blessing is coming to the barn. And while they were in the manger, here come the wise men. They got their own donkeys, but the wise men rode in on camels.