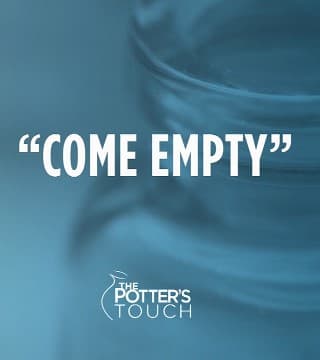 Sometime, when we started talking about making room for God, and we start talking about economic impact, and we start talking about God in finances, I'll talk about how sometime your valley isn't deep enough to get God to let it rain; and sometimes you have to dig ditches in your valley in order to attract God. Because when God comes, he's gonna come with such force that your little problem isn't deep enough to get him to flow in your life, but I don't have time to talk about that today. No-no-no-no, that-that's for another Sunday, but it's good to write down and to take note of, that sometimes the only way to get out of trouble is to get deeper into trouble. And you have to be desperate to receive that because if you're a rational you won't get that, you have to be desperate enough to throw in your everything and say, "I ain't got nothing to lose, if I lose it I'm going down anyway, I got nothing to lose".

Oh, it is your nothingness that attracts God, it is your void, it is the vacuum, it is the abyss of need in your life that attracts God. It is not your stuff, it is not your degrees, it is not your money, it is not your Gucci bag, it is your void somewhere down in your soul; oh God, somewhere down in your soul. You gotta be empty enough to have a faith experience, you have to be vulnerable enough to have a faith experience. Jesus, I need to teach you how to walk when you're walking on concrete, it's only when you're walking on water. You have to be vulnerable enough for God to get your full and undivided attention. God has this woman's attention and he says, "Go borrow from your neighbors".

Now, it's one thing to be broken, it's another thing to tell your neighbor's you're broke. They're already talking funny, they're already looking at you, they already noticing that the lawn is not manicured and the house needs painting. They already know that you haven't had a manicure and pedicure, they already noticed that you haven't got your hair done and God says, "Go tell your neighbors," that you need something. And he doesn't tell you to beg for it in the sense of asking them to give it to you, he said, "This won't take long, just borrow it". When you hear the word borrow it's like Jesus borrowing the grave, "This won't take long, just just let me borrow it, just going through something".

This situation that you're in right now will not last, you just need to borrow a solution 'cause after a while everything you lost it's gonna come back, everything that got away it's gonna come running back, everybody who walked off is going to come knocking on your door. This is a temporary situation, and he says, "Go to your neighbors, and go knocking on doors with your sons that they're about to take, send them out into the neighborhood".

In order to get your miracle I'm not taking just any kind of vessel, don't bring me a half-full vessel, don't bring me three-quarters full, don't bring me one-third full, they must be empty to be eligible. Are you empty enough? If you got one idea left you're not empty enough, if you've got a plan b and a backup plan and a contingency plan and a plan c, you're not empty enough. God said, "I want you to get vessels that are empty". And the reason that the Holy Spirit sent me over into the text is not so much for the text itself, it is not the text itself that I am contemplating, it is the text against the times that we're living in, 'cause we are living in some times right now of emptiness. I'm wondering if there's anybody watching me that's been feeling empty.

Now I must take the time to make a distinction between being empty and being tired. If you are just tired and you get some sleep, you wake up in the morning and you feel better, but if you're empty, sleep will not resolve it. Is there anybody who woke up feeling as bad as you did when you laid down? It's not that you're tired, it's that you're empty. And this message goes out, oh my God, to people who have been having this indescribable feeling that you don't even understand how to explain yourself; that you have just seen so much and heard so much and watched so much and read so much; and seen so much news and read so many texts, and seen so many things tweeted, and seen so many things happening in your personal life and your financial life and in your public life and our professional life.

And so many people have been calling on you, asking for advice and for help and for encouragement to the point that, "It's not that I don't like you but I saw it was your number and I didn't answer, not 'cause I don't like you. it's just that I'm empty". I want to talk to some people who are just feeling empty; not happy, not sad, just empty. People keep asking you, "How are you," and you can't even find a word to articulate how you've been feeling because you're not used to describing yourself, as if your contents were gone because you've never been drained like you've been drained here lately, and you are feeling empty.

God values you the most not when you're full, not when you're overflowing, not when you got all kind of creative impact and energy, that God values you the most when you are empty. You see, God creates empty. When, in the book of Genesis when he reached down into the earth and he formed man from the dust of the earth, he formed an empty vessel. Yeah-yeah-yeah-yeah, he was careful, he didn't form it full, he formed it empty, and he wanted it to be empty so he'd have something to blow into. Y'all don't hear me. Out of the dust of the earth, an old clay pot, an old empty vessel called Adam, hallelujah, made of red earth, God shaped him and formed him, and then when he made him empty, then God was attracted to him.

Touch your neighbor and say come empty. So there God is, we see the master himself, hovered over top of an empty vessel as if he were an eagle hovering over an egg. As if he were about to hatch something, God came down from eternity, stepped over into time and hovered over an empty vessel, and he was so attracted to it that he kissed the empty vessel, and when he kissed it he blew in his mouth the breath of life and he became a living soul. I don't know who I'm preaching to but God is getting ready to kiss somebody. Hey! God is getting ready to kiss somebody who's been walking around for the last three weeks with an indescribable emptiness down inside of you, a void, a vacuum, that nothing seems to fill.

You're watching TV but you're distracted, you're listening at the news but you're only half listening at it, you're going through the motions, you can't even remember for sure, "Is this Wednesday or is this Thursday? Is this, is this Friday or is this Tuesday"? You're just empty but God is attracted to empty, and so he hovered over an empty vessel and he blew into it the breath of lives and it became a living soul. Later on, as we turn the pages of the Bible, we will see what God tells Moses on the mountaintop to go form a tabernacle and Moses formed the tabernacle. And once he got the tabernacle all formed, then God said, "Fill it with furniture," and he began to fill that which was empty with furniture.

And then, when he made the Holy of Holies, God said, "If you make the Holy of Holies and you'll make it empty I'll come in and fill it with glory," and the glory was called, "Shekinah Glory," because God is... oh, I feel like preaching now, God is attracted to empty. The question is not are you full enough, the question is are you empty enough? Because what God wants to come into his presence are not people who got it all together, are not people who got the hair all coifed, God wants people to come into his presence who are empty. And the Bible said that if you are empty enough, God will fill you, or let me say it this way, "He that hungers and thirsts after righteousness shall be filled". God said, "I'm not going to feed you till you're hungry, I'm not going to feed you till you're thirsty, because I am a God that is attracted to empty".

Excuse me, I got to knock on the door, "Mama said, 'Can we borrow your empty?'" You want what, baby? "Mama said, 'Can we borrow your empty?'" "Excuse me, my mama sent me over to your house to say, 'Can we borrow your empty?'" And door by door, and house by house, and neighbor by neighbor, the boys went out and all they gathered was empty, and they kept coming back to mama's house bringing empty vessels, one right after another. The Bible doesn't tell us how many they brought, but the Bible does tell us that the oil didn't begin to flow until it found empty. There is a glory that God will only release on somebody who comes into his presence and you dare to come empty, "I'm out of ideas, I'm out of concepts, I don't have nobody else to call".

Little by little, and house by house, and neighbor by neighbor, let me get enough empty. It reminds me of what Jesus did when he laid hands on the disciples and blessed them, and told them to go to Jerusalem, and said, "Don't start preaching until you're empty". And the Bible said that, "All of these disciples were in the upper room and they had not been filled with the Holy Ghost. And when the day of Pentecost was fully come and they were in one place with one accord, suddenly there came a sound from heaven like a mighty rushing wind," yes, "Cloven tongues appeared like as of fire and sat upon each of them, and they were all filled with the Holy Ghost".