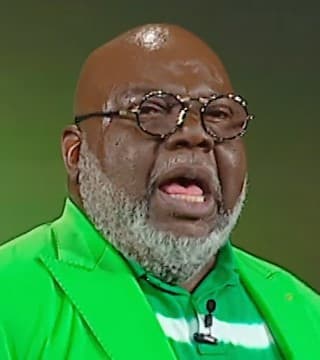 He grasps Esau by the heel, the position is not lined up right, and the Bible says, to his mama, Rebecca, he says, in the Word of God, that, "The elder shall serve the younger". Now let's translate this out of the context of the text into the turbulence of you. You, the human you and the divine you. The human you and the divine you are still you, they still wear the same suit, they got on the same tennis shoes, they wearing the same shirt, they came out at different times. I was born June the 9th, 1957, I was born again September 1972, and the trial of my life is to make sure that the elder...

It says that Jacob was kind of a mama's boy. he had to be, his daddy didn't like him. If I had a men's meeting, I'd wear that out. And so he's good at what mama's good at. The anointing you respect is the anointing you receive, so Jacob can do what Rebecca can do, are you following me? Let me get into this. Jacob can do what his mama can do but Jacob is important because Jacob is the one that spreads the lineage, it shall not come through Esau. Now Isaac doesn't pay much attention to Jacob, though Jacob is serving Isaac, according to the Talmud, the particular meal he prepared is in honor of his father, meaning he's a mama's boy but he got Daddy hunger. Esau comes in the house hungry, we pass over all of their childhood experiences, we come down to their hunger.

Esau is so hungry and he values flesh over Spirit, so he says, "Give me some of what you've got in that pot," and what Jacob was cooking. Let me tell you something, Jacob, don't despise your gift 'cause your gift is gonna make room for you. I know it's not a gift that people want to recognize, but it's a gift that God is gonna use to open up the next dimension. This is a prophetic word for somebody who wishes you had a gift somewhere else. No, God's gonna take the gift that he gave you and it's gonna make room and bring you before great men, and though it looks like you ain't doing nothing, sitting around in the house cooking beans, who would've thought that God would have took a bowl of soup and turned it into a moment.

But while he was stirring the pot, while he was stirring the pot, Esau bust in the door, he said, "Hey Jacob, man, I'm hungry". Jacob said, "You know I can cook. You know this good. You smell it, don't you? You smell it don't you"? And then the Bible tells us something that seems unnecessary, it tells us that the soup is red. The red man wants red soup. And I had to read it over and over again. Because when Esau saw the soup, the red soup cooking in the pot, the boy who was born red values what he is. Flesh always values what it is. I'm coming in, watch this.

You are no greater than your choices. Your choices are built off of your values. Whatever you value is what you're gonna choose. Esau chose what he was. The red man chose the red soup and he didn't value his birthright, He said, "What good is my birthright when I'm hungry like this"? He had something that he didn't value, and any time you have something that you don't value, you will always lose it. Somebody who knows the word ought to shout right there. Any time you have something or somebody or some job or some place or some opportunity that you do not value, you will always lose what you do not value.

Your choice determines your change. God is going to offer it to you, your values will determine whether you are worthy of it. Jacob is cooking soup, Esau has a birthright that will affect thousands of years and all of his children, and Jacob is over there just cooking. This is the moment, the moment is determined by choice, not who they liked the best, not who came out first, not how they struggled. This is the moment that all of heaven is peeking over the balcony to see the choice, because the choice determines the change. You are not going to get to your next destination just by prayer. I hate to mess with you, I hate to mess with your mind, but prayer will not be enough. It will be by choice.

I thought for sure, I thought for sure before I went back and studied the text, I thought for sure that Esau's name changed to Edom from which came the Edomites which means red. I thought it happened at birth, but it didn't. They didn't change his name to Edom, which caused all his descendants to be the Edomites, who ended up possessing the territory that we now call Jordan, and a little bit of what is Israel too, was their dwelling place. It did not happen at birth. It did not happen at birth, it happened at the bowl, when he looked at the red soup and thought it was more valuable than his birthright.

When he looked at the depreciating asset and didn't value the appreciating asset, when he looked at the gratification of the moment rather than the reality of the process, when he looked at exciting the crowd as a preacher but not studying at home to know the message. See, that's what's wrong with what we got right now, we've got a lot of people who want to look like what they are not. They don't want to really do the work. You always draw what you value, but you're doing it to you. You end up with the man you deserve. You end up with what you value. We end up with the president we value.

Our presidents are not anything but a reflection. None of 'em, I don't care whether it's Democrat or Republican or anything. I don't care what you call it, choice is always determined by value, or the lack thereof. So what you see going on outwardly is always a reflection of what started going on inwardly because it determines what you value.

Now a choice is coming and you have to be strong enough to go long enough in pain for a greater vision of what God is about to do in your life. This choice changed his name, changed his children. Had he not made this choice, God would later tell Moses, "I am the God of Abraham, Isaac, and Esau". Had not given up his birthright his children would have been the heads of the tribes of the children that we know as Israel. But for a bowl of soup, the Jewish Talmud said that Esau spent the rest of his life trying to get that birthright back, and even in death, that he was bringing gold and silver trying to get the right to be buried in the sepulcher of his fathers, because by the time his values caught up with his life he had lost point five the moment, the power of the moment.

The power of the moment is not retroactive, there are some moments you will never have again, there are some things that once you lose them you will never get a do-over again. The Bible said, "Esau sought repentance with many tears and found it not". What is this that God is saying repentance wouldn't work? Repentance always works, but not this time, because this time it is the power of the moment. Doing the right thing at the right time will determine the right outcome, if you missed the moment. All of heaven is suspended, the chronicles could not be written until the choice was made. This choice will determine the rest of the book, but God already knew what he was going to do.

Who would've thought that after all of Jacob's fighting he would win the battle with a bowl of soup? Some of you that have been struggling for years for what is rightfully yours and all of your fussing and all your fighting hadn't got it done, God's going to use your gifts. After years of struggle, after years of inequity and injustice and misfortune, after years of being stepped over and overlooked, after years of crying yourself to sleep and saying, "Why doesn't Daddy like me"?