TD Jakes - Count it All Up 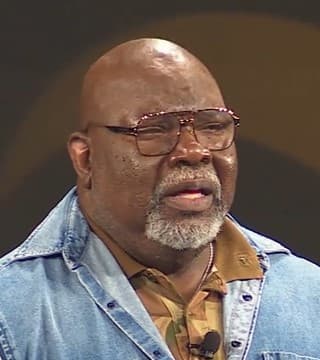 Even the wisest amongst us has to scratch his head with the ideology of how, how can I survive this moment? I know I'm strong, I know I'm tough, I know I'm resilient, I know I'm committed, but how can I withstand the turbulence of this moment? You must understand that when we delve into the complexities of this text and we dare to hear the Apostle Paul speak, he is not speaking something he saw on Instagram, he's not picking up a quote from Twitter and running with it.

This is a man who has suffered and been beaten, this is a man that's been left for dead, this is a man who has wounded in such a way that the lacerations against his skull caused the crowd to think he was dead. And after they all walked away, thinking he was nothing but a corpse, he got his bloody body up off the ground and walked away and then he said, "For I reckon". It is it's not so much the rest of the text that I want to grapple with, I wanna have grapple with the, "For I reckon". I reckon is a term that it almost sounds country to me.

I grew up in West Virginia and when people would be talking and you wanted to respond to them, and you say, "Well, I reckon". I reckon, it made you sound country, it made you sound hillbilly, it made you sound out of sorts. And I know that this King James Bible that I'm holding couldn't be written in West Virginia or down in Mississippi where my grandparents come from where they'd say, "I reckon it's over yonder, I reckon it's across the street, I reckon it's around the store". I reckon, where did this term come from that the Apostle Paul who is intelligent beyond human comprehension would use such a word? Certainly he just not using it as my cousins and my friends did playing in the school yard, "For I reckon".

What does he mean by reckon? Reckon speaks to reasoning, it speaks to rationale, it speaks to trying to understand, as Marvin Gaye would say, "Tell me what's going on? What's going on"? I have to admit, 2020 has left me scratching what hair I don't have trying to figure out what is going on, and I struggle with the word reckon, so I had to look it up. And it says logizomai in the Greek, where we get logos, it means in the sense of an account or reckoning, and then I begin to understand that reckoning is not a country term, reckoning is an accounting term, an accounting term, where we reconcile the books.

And isn't that what we all want to do with our suffering and with our pain and with our life? Is find some kind a way to make sense out of it, to make purpose out of it. If I had to lose my daughter, why? I have to make this pain makes sense. There's not one amongst us with a grain of intelligence at all that hasn't spend a moment trying to audit our own lives and try to figure out why did I have to go through that? Why was I abused at a vulnerable age? Why didn't my father and mother leave me? Why did I move from house to house? Why did I grow up in foster homes? I wonder why?

There have been moments in my own life that I had to sit down, get all by myself, get quiet, make everything shut up for a minute and just try to reckon. It is at this moment of deep reflection that we are allowed by the Holy Spirit to hear one of the greatest orators and thinkers of our time grappling with the ideology of how do I make sense out of life? This is the Apostle Paul trying to figure out what's it all about Alfie, what's going on? Tell me what's going on, I reckon. This is the Apostle Paul who tells us that when he went to Asia he was so overwhelmed that he went into a state of depression and wanted to die, this is not some whimsical upstart motivational speaker who's trying to give us a good feeling.

A young man who had been with me almost since the inception of my ministry periodically came along down through the years as he followed me, and he would ask me in a private moment, "Was it worth it"? And the question that he asks me, depending on the time that he asked it elicited a different type of response. Most of the time I responded, I'd love to tell you I responded, "Oh yes, it was worth it", but for years and years, I said, "I don't know yet, I'm not sure, I'm still reckoning". If you happen to ask me at a time that I was in great pain or great suffering or great denial, "Was it worth it"?

I didn't know how to answer him because I hadn't finished auditing the books, I was still, still trying to get everything in the right column and make sense out of it, and I was still trying to compute the cost, how much it costs to be me. I wasn't sure it was worth it, I knew he was trying to ask me so he could determine his own life's course and I was supposed to say, oh yes, it was worth it, but I dropped my head, and I said I'm still thinking about it.

And we serve a God who demands that we always have something left and some of you haven't got to that something left because you're in the liability stage. And when you're in the liability stage everything's going out and nothing's coming in and it looks like God is not fair, but if you stay where you are and endure hardness as a good soldier, after a while, the same soldiers, the same police officers who hit you in the head will escort your body back because if you hold out long enough you will rise again undaunted, and the same people who watch you be crucified will watch you be resurrected, and the same people who watch you go down will watch you come back up again.

Somebody I'm talking to right now, you don't know yet, so I thought I would bring before you this morning somebody who had already been through it. And unless you've been stoned half to death and snake-bitten and sailed on ships that shipwrecked and you had to float across on broken pieces, unless you have spent years locked up in a cold grotto in a cave in a jail cell begging for a coat, then whatever else you're suffering with cannot compare to the testimony of the Apostle.

For the man that I bring before you today, he endured all of that and he was still thinking about it, "For I reckon". I reckon I stood over my mother's grave, and I reckoned. I stood in the hospital with her trying to make sure she understood the difference between me and my brother, and I reckoned. I watched my baby girl give birth to a baby boy, and I reckoned. There are moments in your life where you're still counting it all up and I came to tell you don't stop counting because God won't be satisfied until your assets outweigh your liabilities, God won't stop until your assets outweigh your liabilities.

I have paid too much to get where I am right now, it was good for me that it didn't come easy. It was good for me that I had to sweat for it and crawl for it and pray for it and do without to get it because it made me appreciate it. My God is a God of profit, my God is a God of profitability, he is a God of what you got left. While over and over again in the Scriptures, we see God dealing not just his profits and losses and assets and liabilities, but over and over again we see a God who thinks about profit, "I won't just give you enough oil to pay off your debts, I'll give you enough or that you can live off of the rest. I won't just take your two fish, five loaves of bread and feed the 5.000, I'll give you such profit you'll have 12 baskets full left and your problem will be how can we get this back home? I am not just a God that opens up the windows of heaven but I'll pour you out a blessing you don't have room enough to receive, I am a God of profitability".

So I wanna challenge you to do an audit on your life and judge nothing before its time, but judge the righteous judgment, and the righteous judgment takes time. It took me years to answer that question. Finally, as I got older and my hair got white, I walked up to him one day and I said, "It was worth it". I didn't answer that the first decade, I didn't answer it the second decade. Finally I came along and said, "It was worth it". For the glory that shall be revealed in us is so worth it.