TD Jakes - You Can Still Get There 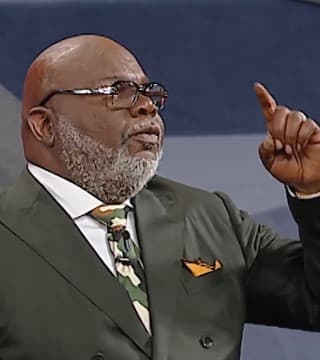 Acknowledgement defines relationships. I call my sister on the phone one day, I said, "I give Serita roses like everybody else give their wife roses, and I don't get the reaction that I'm supposed to get". I call my sister, I said, "What's up with this rose and stuff? I give roses, she's supposed to like grin or cry or something", she said, "Oh, that's nice", and put them over in the corner somewhere, and I spent like $300 worth of roses, I want to see a tear or something up in this woman.

And my sister said one thing to me, changed my life, she said, "You're doing it wrong", I said, "What do you mean I'm doing it wrong? I got three dozen roses", three dozen red roses, they wasn't yellow or nothing, they wasn't thrown out in the back, got brown on the corner, these are fresh roses, budding it in her face. She said, "Give them on her job", she said, "Let the delivery man come to the office and let all the women stop typing and want to see who got the roses, walk past all them other women and put the roses on her desk", and all of a sudden, them roses have all kind of value because acknowledgement, acknowledgement defines relationship.

I did it, I sent them on the job, she all, "You shouldn't have, you so crazy, go on outta here", because we yearn to be acknowledged, we yearn to be acknowledged, to be recognized, to acknowledge me says that I matter. Peter did something, the church is always upset about moral failure but what Peter did is worse than moral failure, because moral failure is weakness. To not acknowledge me is wicked, it is wicked for you to walk in that room and act like you not my wife, it's wicked. I walk with you, I love you, I clothe you, I paid the rent every month, I bought the stockings on your legs, and you walk in that room and you act like you not mine, give me them stockings back, give me them shoes, give me that rent, I hope it rain on you tonight and you get soaking wet. Praise God, praise God, Hallelujah, because acknowledgement determines relationship.

Jesus said, "If you deny me before men, I'll deny you before my Father which is in Heaven". You no acknowledge me, I no acknowledge you, and let's see who needs the other the quickest, I bet you I could get by without you better than you can get by without me. He says okay, you wanna play denial? You deny me, I'll deny you. Peter, who just cut off a man's ear, Peter, who just had faith enough to walk on water, Peter, who was ready to build three tabernacles up under pressure, up under pressure. Seeing Jesus's blood spatter, watching him writhe around the tree as the pain lacerated his flesh and his neurological impulses kept sending messages to his brain so strong he should've passed out.

Peter, who saw his Jesus transformed from a lion into a trembling, bleeding lamb, who saw his Jesus, who commanded angels, writhe and jerk and scratch like a child. And they looked at him, and asked him, "Were you with him, is that who you called Messiah? Is that your Lord up there naked, naked? That's your Lord butt naked, bleeding, squirming, whimpering, is that who you worship"?

Now you must understand that Peter lived in a world of crosses, Christians like to think that Jesus was the only one to be crucified, but history proves it to be a myth. The Romans controlled the Jews with crucifixions, that means that they grew up seeing people hung high and stretched wide, dying in the sun, vultures picking at their flesh, it was a way that power intimidates the oppressed, "I'll kill you if you disobey me, I'll kill you". It's like lynchings, I knew if I said that you would get it, it's like lynchings, you know the lynchings were always public, come out and watch the lynching, because it's intimidation, it's terrorism, lest you rise up, "You going to run too"? Come out and watch me cut his foot off and let me see how much running you do, you bad.

I hear you young folks talking about, "It's a good thing I was born when I was born 'cause let me tell you something, I would have"... Shut up, shut your mouth, you ain't seen nothing, it's the difference between hip-hop and hip hopping. Somebody cut off your foot you'll shut your mouth, as you drag them back in the tent and pray the gangrene don't take the whole leg, and without any anesthesia you try to sew up the damages and stop the bleeding, and you watch grandma wrap her sheets around somebody's foot. Peter grew up in a world of intimidation, there was no question in his mind, "They'll kill you too". "Peter, were you with him"?

Uh, uh... and to Peter, who argued with Jesus and said he would never deny him, and the Peter who cut off ears, and the Peter who performed miracles, and the Peter who had insight as to Christ being the messiah, now says, "I don't know him". And I would have thought it was a one time thing, but again, they came up and another one pointed him out and said, "I saw him, I recognize him, he's one of them Jake-ites, I saw him on the video, that's him, he go to Jake's church". Peter said, "Nuh-uh, no I don't, no-no-no-no", and yet again, have you ever kept failing him and failing him and failing him? Have you ever done something that you said you would never do?

And I have learned as a leader, that people will love you and support you as long as other people do, but when it no longer becomes popular to be associated with you, you have to always keep your heart prepared for rejection. Never get so comfortable in the lap of the applauds of men that you actually believe it, because all you're doing is setting yourself up for failure because it is easy to love people when other people love them. The hardest time to love people is when everybody turns against them and they're writing about them, and they're talking about them, and they're in the news, and they're in the paper, and they're everywhere.

And that's why I exalt loyalty above everything else, because I appreciate most not the people who are with me when people are with me, I appreciate people who are with me when everybody turns against me. And you knock on my door and say, "I still love you, now you got clout with me". And Peter, who had been a nobody and a nothing and a failure, Peter, who had been a nothing, who had risen to power only because he was connected to Jesus, now denies the one who raised him.

I was over in Fort Worth, and they're doing a lot of construction over in Fort Worth, and they haven't taught my GPS that you can't turn left here because they got this concrete temporary wall built up here and so you can't turn left and the GPS is spinning. And I mean people are behind me blowing and I'm fussing and it's embarrassing and I'm irritated and I'm not feeling real Bishop yet, do you know what I'm saying? It's just one of them moments that I have every now and then, that I just, if I don't take my medication I turn in to somebody else. I was having one of them moments, it was a detour, things weren't laid out like they used to be and I couldn't get there like I used to.

And I can tell by the way the disciples act when I come around that I'm not really one of them anymore, and the only thing bad about being the ex is that when you aren't that, who are you? First Lady Obama's First Lady Obama, First Lady Trump is First Lady Trump, and that comes with all kinds of stuff that goes along with being that. I'm not saying she's not gifted in her own right, both of them are strong in her own right, but there are some perks that come through who you're connected to. There were perks for being a disciple, but not an ex, people love the First Lady til the pastor die. No-no-no-no, you don't like it but that's a fact, there's some first ladies in this room that will tell you, you was getting the flowers and the roses and the cakes and everything, your husband died and they said, "We have to take the parsonage back". That's how it works.

See, Peter has not spent his life building up him, he's spent his life building up Jesus, he's put his business or home for three years, he's lost his client base, he's lost its contacts, a lot can happen in three years. Peter is lost and even though he got call with Andrew, Andrew can't call him back, and that's why this text is important to me. Because when Jesus rose up from the dead and showed himself alive, he told the woman, he said, "Go tell the disciples, and Peter".

And so when my car I've got through rerouting, it worked it out another way and it said, "You're only five minutes away", and suddenly, I realized what I want you to realize today: I can still get there. I said all of that to you this morning because there's somebody in this room who got lost and got off track, and made a wrong turn, and got yourself in a mess. I don't know where you are and I don't know if I'd recognize if you'd come up, I don't know if you recognizable to me, but you're recognizable to God, because God gave me this message for you.

He told me to tell you, You've been driving and going on like you doing something but you know you lost, you've been busy with all kinda busyness but you know that you and I living your life's purpose, you're just going with the traffic, just driving with the crowd, but you've been off course for a minute (cut that music out) you've been off course for a minute. Late at night, and nobody's listening, your heart aches because being in the traffic is not what you were born for, you were supposed to be going somewhere, you were supposed to be somebody, God was going to use your life in a spectacular way, something's got you off track.

The enemy wants you to forget that God knew you were gonna mess up before you messed up. What I love about God, what I love about him, is that he don't change his mind. You know what the Bible says? The Bible says, "Gifts and callings are without the repentance of God", that when he called you the first time he already knew this was gonna happen to you and he has not changed his mind, and you can still get there.