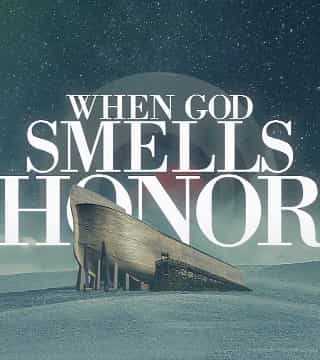 Every person, I don't care how close you are to 'em, every person's got to build their own altar. I can't build your altar for you. I love you, I can't build, I can't build your altar for you. You gotta have your own altar, your own place, your own hook up, your own connection, and you have to build it. It doesn't come prefab, it doesn't come already erected, you have to build it. And so, Noah builds an altar. And this morning, I want to ask you what are you going to build? What did God put in your life, the raw materials that need to be built, and you're complaining 'cause it ain't built? I gave you the wood. I gave you the wood. I'm not gonna make the chair, I gave you the wood. And it is, whatever it is, it is what it is, a result of what you built it.

You want it to be better, build it. You want to enhance it, build it. You want a better relationship, open your mouth and start communicating. It's not going to happen if you don't. You want God to bless your business? God will bless your business, but he can only bless what you build. He will bless it, but he will not build it. So, that means you got to get off the phone with them people talkin' about people. I'm 62 years old and I have never met a rich gossiper. I don't know no rich gossipers. Every gossiper I know is broke, because rich people don't have time to be in your business. They got to be building their own stuff. Now, you check the record, every gossiper i ever met. 'Cause if you taking care of my business, you ain't got time to take care of your own.

Touch three people say, "Build it, build it, build it". This thing, I'm almost finished, is anybody getting anything out of this word this morning? This is really, to be honest, this is really a weird Bible story. It's not really a cool Bible story, 'cause all these people are dead, except eight people. This is a catastrophe. This is a calamity of mammoth proportions. These eight people need therapy, they need counseling, they might need medication. No wonder Nimrod freaks out. And the question becomes how do you respond to God when he does something you don't like?

Now we're talking about real Christians. You see how the shout range went way down? Because half of the people in the room only praise God when they get good news. But if you're really his child, you'll praise him when you don't understand it. You'll praise him when your heart is broken. You'll praise him when you're upset. I was struck by the presentation this morning. I knew Thomas Dorsey wrote "Precious Lord", but I didn't know the circumstances around him writing it. With a dead wife and a dead baby buried in the same casket, he stumbles to a piano and builds an altar, not understanding why God would give something and take it away. He doesn't complain about it, he doesn't get bitter and use it as an excuse to backslide, he stumbles to the piano and pens the words, "Precious Lord, take me take my hand. Lead me on, let me stand. I'm tired, I'm weak, I'm worn. But through the storm, through the night, lead me on, Lord, to the light".

Take my hand, I can't go through this without you. Take my hand, precious Lord, lead me on. It is that spirit that made Noah step down out of the ark, and get some wood, and build an altar. And he offered up a sacrifice. A sacrifice, not a tip, not a toy, a sacrifice. A sacrifice means that God doesn't want you to keep giving him stuff you can't feel, because if you can't feel it, he can't either. What makes a sacrifice a sacrifice is its significance to you. It's a statement of value. It's a statement of value. And Noah says I know I should've drown, too, and you had mercy on me. You let me succeed where others fail. You let me get in where others were locked out. You let me complete what other people stumbled in. You let me survive what my friends did not survive, even though I did the same stuff they did.

Oh, you ain't gonna talk to me this morning. You ain't gonna talk to me? So, I'm building this altar and I'm offering up this sacrifice partly as an admission of the fact that I should have died, too. So, I offer these animals in my stead. This is the gospel. You took my place. He offered a sacrifice up to God, and as he slayed the animals and lay them out, and set them on fire, a burnt offering is always a sin offering, hallelujah. Ooh, God, I hope you're gettin' blessed, 'cause I sure am. Whoo, I couldn't wait for you to get here.

I wanted to preach this so bad, I started to come to your house. I started to come in your living room and just let you have it, just so I could get this out of me. 'Cause when he gave me this, it blessed my soul. I want to give him something he can feel, 'cause I realized had he dealt with me according to my sins, I should've drown with the rest of 'em. You didn't make it through school 'cause you was better, you made it because he was merciful. You didn't get what you got 'cause you was better, you made it because he was kind to you. Don't you get up here and stick your nose up in the air and act like you somethin', bring your nose down to this altar.

There are some things I will never take you through again, because I smell honor. Later, he would tell Moses, "Honor thy father and thy mother, that thy days may be longer upon the earth which the Lord thy God giveth thee". When God smells honor... I'm gonna stop. We got a lot of church people that come to church, and we got a lot of people who come to service, but out of this great crowd of people, we got a few folks that offer up a sacrifice, and really give God honor. And if there's anybody out there under the sound of my voice who's got something to be thankful for, don't wait on nobody else around you, 'cause most people won't do it, but build you an altar, and offer you a sacrifice, and get in the presence of your God, and stumble up to heaven, and give him the honor and the glory.