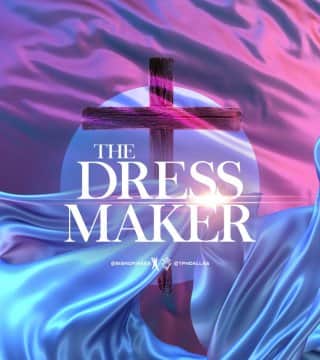 I found him covered with fig leaves that he and Eve had stitched together. I found him covered with his works. Oh, I don't want to be found in him like Adam, covered in what I have worked and stitched together. Because you must understand that when Adam was stitching the fig leaves, he was sewing together that which was dying. And all the stuff that we work so hard to stitch together is dying. All the stuff that we think is important is dying. All the things that makes you smart are dying, because smart will be stupid in ten years. It's dying. All the things you learned in school will be antiquated in five years. It's dying.

All when I went to school, Pluto was a planet. And we're busy stitching all of this stuff. Your beauty is dying. Your financial portfolio is going to die. It's gonna run out. All the stuff that you are stitching together are the fig leaves of Adam. Whatcha think of making an apron out of fig leaves? And you're pulling 'em from a vine, from their life source. And you have been pulled from your life source, and so you started pulling them from their life source because dead begets dead, and separated begets separated, and disconnected always likes disconnected. And so you're disconnected, now you want to disconnect the fig leaves and sew them together with dead thread to cover you.

Oh, don't let me be found in him covered with something that makes God sick. Don't let me do that. Give me the 21st verse, because God had to go and do "And unto Adam also and to his wife did the Lord God make coats of skins, and he clothed them". Not in that which they had stitched. They didn't sew a piece of it together. God sat down and slayed an innocent animal as a substitution for slaying them, and took the coats of skin, and stitched them together, and made a garment to cover them so that they would be dressed in his righteousness alone, faultless to stand before the throne. Not because of what I had made, but because of what he made for me. Do you hear what I'm saying? I don't want to be found in him, covered with my stuff. I want to be found in him, covered with that which has been bestowed, bequeathed, been given, imparted unto me, and that's the power of this text.

The Bible says that Saul asked Abner, "Who is that boy"? Abner said, "I don't know. He's not been in the court before. I'll find out who he is". They became curious of him because of what he killed. They're not curious because he had an Instagram page that said, "I'm a philanthropist. I'm a CEO. I'm an executive. I'm a company owner, and I dropped out of school when I was 19". They respected him because of what he killed. I'm not sure your neighbor can handle this, but touch 'em and say, "Kill something". I didn't say somebody now. I didn't say somebody. I didn't say somebody. Don't bring me to court. Y'all not suing me this morning. I didn't say kill somebody, I said kill something, something bigger than you, something stronger than you, something where the odds are against ya, somethin' you can't afford, something you can't do by yourself, something you need God to help you to do.

Jonathan stripped himself so that David could be dressed. This is calvary. This is being dressed in his righteousness. This is what Jesus did. This is why he died naked. He had to die naked so that you could be covered. He is your propitiation. He is your covering. Y'all don't hear what I'm saying. When they got through changing clothes, Jonathan looked like David and David looked like Jonathan. Jesus so clothed you that he said, "When you go talk to Daddy, don't use your name. Whatsoever you ask the Father in my name, that will I do for you. Don't go in in your name 'cause you don't look like you. You're wearing my clothes".

Can I preach that this morning? I feel like preaching this this morning. I feel like preaching this because the pauper is dressed like a prince. The Lord told me to share this with you because sometimes your clothing doesn't fit how you see yourself. I said, "What do you mean, Lord"? He said, "Tell my people I'm dressing you for what's next". Who am I preaching to? God said, "You look funny right now 'cause I didn't dress you for where you are I dressed you for where you're going". See, y'all don't get this yet. David wasn't a prince, but he was dressed like one. If you're willing to look out of place for a little while, if you're willing to be a woman who hadn't got married trying on a wedding gown, God said, I'm not dressing you for your past, "I'm dressing you for your future. What I got on you right now, when you step in the place"... Yeah, yeah, yeah.

Now, see, this is the problem with you. Here's the problem with you. Can I tell you? You tryin' to fit in where you're leaving. You're trying to fit in where you are leaving. God said he's dressin' you for what's next, but you gotta be willing to look strange to your brothers 'cause you're dressed for what's next. Can I go deeper? Give me a little bit more. I want to finish this. "And it came to pass as they came, when David was returned from the slaughter of the Philistine".

One thing about David, he could fight. He could fight. He learned how to fight in his past and God brought it over into his future. He was training him. And David whipped the Philistines hind parts. He tore them up. "That the women started singing. All the cities of Israel singing and dancing, to meet King Saul with tambourines, and with joy, and with instruments of music". And they're making noise, and they're playing all the instruments to meet the king. Come on, "And the women answered one another as they played and said, 'Saul has slain his thousands and David his ten'"...

God is about to give you the... About 30% of y'all know how to act. The rest of y'all can't even receive what I'm saying. God is about to give you the kingdom. The kingdom. The kingdom. He gave you the clothes, now he's gonna give you the kingdom. And when I'm talkin' about clothes, I'm really not talkin' about clothes like dressing up. I'm talking about God will present you as if while you were not, because it is a precursor of what he's about to do in your life. And he will make people see you as more than you have. He will cause them to respect you on the level of your prophecy, not your history. And you know your history, but they see your prophecy, and you're standing in between both things wondering which one to believe. So God is making a king out of a person who sees himself as a shepherd boy. And the first clue was the Dressmaker.