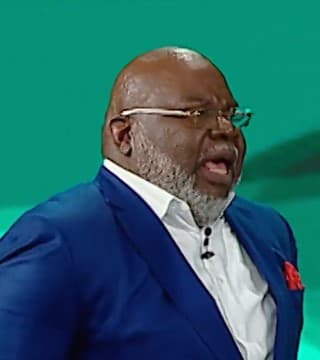 Some of the things that God told you when you were a child, you're just now coming into the place for God to do the things that he prophesied a long time ago. There are some things that God whispered to you in your youth, and all of a sudden the stage is just now set. Certain things had to happen, circumstances had to change, certain people had to die, certain people had to move, certain things had to shift, but God is getting you ready to do something at this stage that he told you long time ago. I set you apart, and I called you for a purpose, and I'm gonna do something in your life. Be not weary in well doing, for you shall reap in due season if you faint not. God has selected you since you were a child, and it looks like he forgot you, but God sent me this morning to tell you, "I have not forgotten you. I have not forgotten you. I had to move some things, I had to change some things, I had to break you, I had to shape you, I had to make you". But you're about to step into your season, and things are about to break forth in your life. Are there any Comeback Kids in the house?

I want to talk to some people. I know you can't act like you do, 'cause you got your cute dress on, and you don't want nobody to know, and you're trying to catch them tears before they fall down on your face, but for the size you are, you shouldn't have the problems that you do. But somebody dropped you. And the truth of the matter is, you can't get out of Lo Debar by yourself. You can't get out of Lo Debar by yourself. But the good news is, is when David asked Ziba, where is he? He said, he's in the house of Ammiel, and he's down in Lo Debar. God sent me here to tell you he knows exactly where you are. My God, I feel like shouting. Everybody else might have forgotten you, but God knows exactly where you are. Everybody else might have thought you'd never be nothing, but God's kept you on hold for such a time as this.

So when Ziba brought Mephibosheth. Y'all must have made me feel like preaching now. Into the palace, Mephibosheth fell on the floor. And David looked at him, not even recognizing. Said Mephibosheth, see, some folk don't even recognize you because you've been through so much that they don't even understand how did you end up like this, Mephibosheth? And the man with broken legs said, at your service. And he said to Mephibosheth, I'm going to give you... I'm gonna give you all of your father's land. I'm going to give you stuff you didn't even work for, houses you didn't even build. I'm going to give you a blessing that's been held in escrow. You're gonna inherit a blessing. I'm an heir of salvation. I've been purchased by God. I'm about to step into something. I know I'm crippled, but I'm about to step into something.

Somebody take a step right now! God said, God said, you're about to step into a press down, shake it together, running over, supernatural. Who am I? Who am I? See, this is how I know it wasn't just his feet that was lame. His mentality was lame, 'cause he said, I'm a dead dog. I'm a dead dog. The king's kid thought he was a dead dog. Now he's in the right place, but he got the wrong attitude. David said, don't worry about it, I've already made allowance. I know I just gave you something that you're not qualified for. I know you can't plow, and you can't plant, and you can't rake, and you can't hoe, but I'm not gonna give you the blessing and not give you the provision for the blessing, I'm gonna raise up people who are strong where you're weak, so that all you gotta do is sit down at the table.

Watch this, and I'm gonna close. I had put together my message, and I didn't have a subject and I said, Lord, you'll give it to me when you give it to me. And I got up, I got ready to go to bed, and he said, go back, turn your phone on, 'cause I put my notes in my phone, and he said, call it "The Comeback Kid". I said, why do you want me to call it "The Comeback Kid"? I could see that Mephibosheth was the Comeback Kid, because he made it back to the estate from Lo Debar. But Dr. James, just before I fell asleep, the Holy Ghost said, he ain't the only comeback kid. He said, David also was a comeback kid.

And see, when you are a comeback kid, you're drawn to comeback kids. Nobody else woulda had compassion on him, but because David had got a promise when he was a child, because David had been dropped out of his blessing all of his life too, when he got a chance to bless somebody, the driving force behind the blesser is how they had DNA with the one they are trying to bless. You ain't a good preacher because you're smart or educated or articulate. You're only a good preacher because you're broken. 'Cause the only person that can restore a broken person is somebody that's been broken too. Can I get a witness? Can I get a witness up in this place?

I'm gonna close. So one comeback kid reached back and grabbed another comeback kid, and brought him into a blessing. Because David came into the palace and became King, he had received the blessing that he rightfully did not deserve. But because God had given him a promise. God has switched everything around that was necessary for David to make a comeback. So when you see David dancing, when you see David get the Ark of the Covenant and dance out of his clothes, and Michal is lookin' out the window fussing at him, 'cause she don't think it's appropriate for him to act like that. There's somebody got their hands on their hips lookin' funny at you right now, but if God let you make a comeback, I don't care how they look at you funny, you better praise him anyway. If you praise him, hold it. If you praise him right now, God said, I will restore unto you the years that the cankerworm, that the powder worm, and the locusts ate up. If you praise him right now, God said, "I will restore".