TD Jakes - Get In God's Path 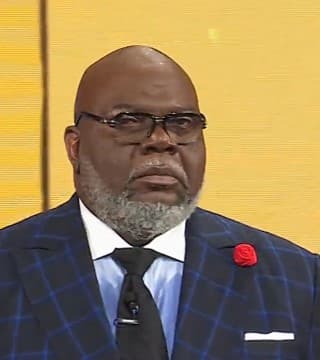 Touch three people and say, "Get in God's path". I was reading my Bible, Sarah, and I started to realize that most of the people in the New Testament that received a miracle in the Gospels got the miracle because they got in God's path. The woman with issue of blood, if she'd've been a street over... I'm gonna say that again 'cause I don't think you got it. If she'd've been one block over, she would have bled to death. The reason that her stocks were stopped was she got in God's, Blind Bartimaeus would've died a blind man if he would've been in the wrong alley, but he got his sight because he got in God's path. The ten lepers would've died of leprosy, but... touch somebody and say, "Get in the path. Get in the path". David says this. He says, "Lead me in a plain path because of my enemies".

In other words, there are too many people that want me to fail so I want you to lead me in a plain... y'all ain't got no enemies. Lead me. They're just waiting on me to lose everything I got. God, lead me in a plain, "Lead me in a plain path because of my enemies". My enemies round about me, such as breathe out cruelty. I want to be in your path. Paul, when he's getting ready to die, wrote Timothy and said, "I'm getting ready to die, but that's all right 'cause I got in the path. I finished my", Oh, y'all ain't talkin' to me. Y'all ain't talkin' to me. If there's somebody in here that's getting ready to commit suicide, don't take your life. You're going to need your life to get it on path. Something is waiting for you. Zacchaeus was a man that said, "If I can get in the path, everything else is going to take care of itself".

I read this and I thought to myself, "I know a lot of rich people". Now, rich is a relative term. To everybody in this room, you are rich to somebody. I realize that I had just enough money to get in the room with people who really had money. And when I met people who really had money, I came up short. I said, "Lord, I sure is short, Jesus. I sure is short". I didn't know. I didn't know. You don't know how short short is 'til you get around tall. You didn't hear that. You're gonna get that when you get home.

He climbed up a tree so he could see. You're not gonna get a vision on the level you're on. You got to climb higher so you can see. The reason you can't see your way clear is that you living on the level of your problems. But if you climb above your situation, if you climb above your circumstance, if you climb above your dilemma, you're gonna see on a level that you've never seen 'cause you're gonna be on a level that you've never been. Good God Almighty. That's so good I'm gonna buy this CD myself. Sometimes what is coming is so big that you gotta start climbing before it comes. You can't wait 'til it comes and then start climbing because you won't be ready for what God is about to do in your life. I don't know who I'm preaching to, but the Holy Ghost said, "Start climbing".

Now, now, wait, wait, wait. You want me to climb, Lord? I don't see nothin' goin' on? Noah didn't see no rain when he built the ark. A guy was texting me last night. He was talkin' about somebody who just sold their business for $1.3 billion, and that several years ago that he had connected with a particular company and they had gone into partnership when the company was still small. And so I text him back and said, "Do you think that he connected with the company because he had instinct or intel"? And he text me back and said, "A little bit of both", because he connected with the company while the company was yet small. And because of that connection, that foresight, as the company exploded, his business exploded and he just sold it for $1.3 billion, with a B, so I was asking questions. I said, "In this case, I am not the teacher. I am the student, so explain to me what he did". He said, "It was a little bit of both, intel and instinct".

Why would you get out of bed on your only free day and come to a worship service and then not worship? That's kind of stupid to me. That's like going to a bar if you don't drink. Why are you here? Brother Fred, when I thought about it, I thought, "You know what? This is a class in humility". Zacchaeus is short to teach us humility, to make us admit that all have sinned and come short of the glory of God. See, the problem with the Pharisees is that they would never admit that they came short. They were so busy trying to impress everybody with how high they were, and how big they were, and how spiritual they were, they never would come short. The problem with the children of Israel when they got the law, the law was never given to them for them to live up to the law.

The atmosphere is not conducive for the miracle. There's all of this controversy. Jesus has got somethin' else on his mind. The disciples are stressed out. They'd been fussing at people. They've been flipping out. It's not a good day. It's not a good time. It's not a good atmosphere. And the Bible tells us that there's murmuring goin'. And the Holy Spirit said to me that in the midst of all of this chatter that's going on in your life right now, that you have been waiting on the chatter to stop, but God said he's gonna do it in the middle of the chatter. The enemy can't stop God from blessing you. He's trying to distract you with all of the chatter, but God said it's time for you to focus because the chatter can't stop God from what he's about to do in your life.

Stop responding to the chatter and get your focus back on your assignment, because nothing that they're saying matters to what God is gonna do in your life. Who am I talkin' to? Just wave your hand. I just want to know who I'm talking to. I don't care if you're sitting on your couch, wave your hand if I'm talking to you. Zacchaeus gets in God's path. He climbs up the tree and he waits. He has positioned himself. You hear me, don't ya? He has positioned himself for an encounter with God. You know why some people go to the same church you go to and get nothing out of it? Because they have not positioned themselves for an encounter with God. You can't get any more out of the service than what you put into it. You have to position yourself.