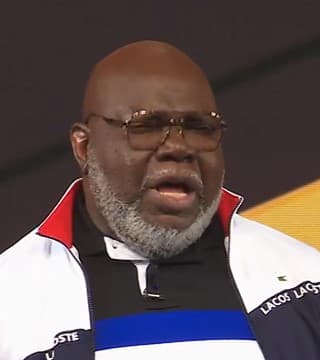 Too many of us are waiting on the circumstance to be right before we claim the victory. The victory is never in the circumstance. It's never in the condition. The victory is always is God for me. If God is for me, he's more than the world against me. If God is for me, I might be any age, I might be the age that's vulnerable, the age that's not vulnerable, but that's not the question. It's not how old I am, it's is God with me? If God is with me, he'll always protect that which I committed unto him against that day. Somebody's gonna get this word today. Somebody's gonna get this word today. Somebody shout, "Hallelujah". And so, they found themselves in the middle of conflict.

Point two, conflict rose up. Conflict rose up. Everybody's got a different idea how things ought to be done. Conflict rises up, and in the time of conflict, it's hard to determine truth. Who can I trust? What is true? What can I count on? Who's gonna be there for me? See, anybody can be there in the time of peace, but who's going to be there and time of conflict? When the battle is hot and heavy, and they don't know who's gonna come out on top, who's gonna stand beside me in the storm, in the test, in the trial? That's the question before us today? I know you've got faith on Sunday morning. Anybody can have faith on Sunday morning. All this nice music, and singing, and praise dancers, and stuff.

Anybody can have faith right now, I'm looking for somebody who can have faith under fire. Faith in the conflict. Faith in the tough times. Faith when the doctor gives the bad report. Faith in the middle of trials and tribulations. Faith with tears running down your face. Faith in the middle of a storm. You got to have it in the conflict. What blew my mind about this text is this text almost doesn't make any sense, because I would think that if God fought for you, and you fought off the Canaanites, and you've got the victory, I would think you would be happy. I would think that if you got the victory, if he answered your prayer, if he brought you through a test, if he brought you through a storm, I would think you'd be praising God and rejoicing in the God of your salvation.

But look through the text. There's not one dance anywhere. There's not one praise anywhere. Not one hallelujah anywhere. Not one thank you Jesus anywhere. Nobody even clapped their hands. Nobody even raised their hands. Nobody said if it had not been for the Lord, we would've lost this battle. Not one of them acknowledged the Lord. They didn't even acknowledge that God helped them get the victory. Instead, they murmured, and they complained. They murmured against the same God they just got through asking to help them. Isn't it funny how you can help people, and the same people, I'm not talking about their next-door neighbor, I'm talkin' about the same people that you do the most for, are often the very ones was that look at you like they got Alzheimer's, and they don't even recognize what you did in their life.

Now, they're laying on the floor, they're about to die, and the Lord says to them the most ridiculous thing. He says to dying people, "Look up". Who walks into a place where people are dying, and tells them to look up? "I'm dying, Lord", "Look up". My husband is dead, "Look up". My child is dead, "Look up", lost my mama, Lord, "Look up". Little by little, they turn their feverish heads. They turn their feverish heads out there in the desert heat. Now, it's one thing to be in the heat, it's another thing to be in the heat and have a fever. The fever is one thing, and the heat is something else. And in the middle of the heat and the fever, God said, "Look up". And little by little, they turned their weak head. Their trembling neck, their parched breath, their squinting eyes, and looked up. And that's when God told Moses the secret. He said I want you to lift up the brazen serpent in the wilderness. And the Bible said that Moses lifted up the serpent in the middle of the wilderness. He lifted up the serpent in the middle of the wilderness.

And one writer saw the correlation between Moses and Matthew, between the Old Testament and the New Testament, between the Old Testament church and the New Testament church, and he wrote these words. "Even as Moses lifted up the serpent in the wilderness, so shall the Son of Man be lifted up". A hymnologist got the revelation, and wrote these words. "How to reach the masses, men of every birth, for an answer, Jesus gave the key". He said, "If I be lifted up from the earth, I'll draw all men unto me". And so the story goes. And so the story goes. But you have to go through bad to get to better.