TD Jakes - It's All About The Stones 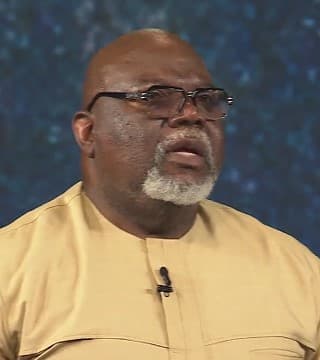 Can you imagine what the crowd was saying behind him? Can't you almost feel the beating of his heart and the rushing of blood to his face, because he has told them that God was with him and still there is no move from heaven. There is no wind, there is no blowing, there is no water parting, everything is acting as if he had no anointing at all. It is in this moment that he must decide what you must decide right now. This moment in your life that you have come down to a critical point and nothing is happening. You have to decide, are you gonna tuck your tail and turn your head and go back, or are you going to step down into the water?

God will make the waters roll back out of your way. And the Bible said that all of a sudden that the people had to come through quickly. You gotta understand what they're walking through. It looks like they're walking through water, but because the priests was in place they weren't walking through water, they was walking through praise. When the Spirit comes in like a flood, the Spirit of the Lord will lift up a standard against the enemy. That's why the priests had to go first, because the priests always represent praise. And when praises go up, blessings come down. I don't know what you're in the middle of right now, but you need to drop your iPad and go into a crazy praise.

Slap your neighbor and say, just stand. You don't know what to do, just stand. Just stand flat-footed on the rock. This rock is Jesus. Stand on the promises of God. Stand on the fact that God is not a man that he should lie, or the Son of Man that he should repent. Devil, this is what I'm gonna do. Having done all to stand, I'm gonna stand, therefore, with my loins girded about with truth.

But they carried it out. They're carryin' stones in mud, they're carryin' stones along with religious artifacts, they're carryin' stones weighted down with the armor of their garment, but they carried it anyway, because God said, your children need to see your stones. Even as I preach here today, my youngest son is standing here to my side. I want him to see my stones. Know that your daddy is a fighter. Know that your daddy would step in a building and fight by myself. I want you to understand that a crowd does not define you. That if God be for you, he's more than the world against you. And when all hell is breaking loose, you just stand. Somebody holler, stand! This is something you can't get out of a book, it's got to be modeled in front of you. You got to see it in your life, you gotta be able to point at it, you gotta have enough sense to recognize it, and there ain't nothing but stones, there ain't even books, but they're teaching a class.

And so I preach this message today to say it's all about the stones, because the Bible said, when your children ask you what meaneth these stones, tell them how the Lord was with them when you were in the middle, in the middle of the Jordan. That is the message. The stones are the message. That a trans-generational. It is the stones of the '60s that the 2020s stand on. If we hadn't done what we did, you couldn't do what you're doing. History is a muddy business. Hallelujah. It's only clean when you wash it off to make yourself look good. History has always been a messy business. It's always been rough and rugged and ragged. It's always had extenuating circumstances and back-room meetings, and sabotages and attack to get us to where we are.

And so these stones. These stones. It's all about these stones. It's all about bending your knee on a football field and being castigated, until somebody bends a knee on somebody's neck. It's all about, it's all about, it's all about the progression of a conversation that creates controversy and confusion and cost jobs and unfollowin' people and rejectin' 'em, and the price people paid for the freedom we have. And that's why the freedoms must be precious, because they are so expensive. They are so, so expensive. That's why you have to vote, because it was so, it was so expensive. I know you're frustrated, you feel like your vote don't count and it doesn't work, and they make it a hard, but listen. It was so expensive. How to respect what your ancestors died for, and bled for, and suffered for, if it don't do nothing. But just please them to see you go down there and cast a ballot. It cost too much.