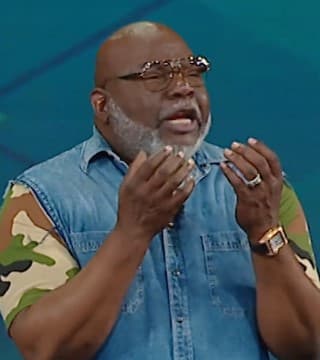 "Oh, I believe God, child, don't worry about that. I believe God. I believe God, yeah, absolutely". But if you hang around them long enough and listen at 'em talk long enough, you'll find that it's possible for your mouth to say something that your heart does not possess. I was goin' through somethin' recently, and it was really, really deep, and really, really heavy, and I expected to be really, really upset, and really, really in a fog about it, and then I kind of... I won't say that wasn't troubled at all, but I was shocked at how little I was troubled. I said, "That's not normal for you. This is the kind of thing that would trip you out, and you would not sleep for days", and I'm in the bed sleep, waking up surprised.

So, Jesus begins to teach a class, and to teach the class, he uses an illustration. He says, "If you have the faith as of a grain of mustard seed". This is how potent faith is. Don't use a whole lot, you'll blow up the planet. It's concentrated, you gotta be careful how much you put on it. Because faith is so impactful, that if you use too much, you're gonna leave a crater in the earth. But if it ain't nothin' but a mountain you wanna move, don't use a whole cup of faith, you'll tear up something. But if you have the faith as of a grain of a mustard seed... You can speak to this mountain. Jesus has just come down off the mountain, so the mountain is right in front of 'em. You can speak to the mountain that's right in front of you, and say, "Be thou removed into the sea", and do not doubt in your heart, and it will get up and get...

I want to talk to you about the mountain that's right in front of you right now, that's standing right up in your face. And so, what struck me was the contrast between the simplicity, and the frailty, and the smallness, and the minuteness of the mustard seed, which is one of the smallest seeds possible. A mustard seed is too small to grip in your hand. It can slip through the cracks of your fingers. It's so small that it's hard to hold it without it getting out from in between your fingers. A mustard seed, there it is, just that. Look at that and say, "I got a little bit". If you have the faith, that's all you need. Let me talk to the folks in the balcony. Where are my balcony believers? For the mountain that you're facing right now, that's all the faith you need.

I feel that God wanted me to preach this because of the mountain that's in front of you right now. Now, I don't know what that mountain is. He didn't show me what that mountain is. I know that when Jesus is talking about mountains, he is not just talking about literal mountains. But whatever is standing up in your life, blocking your view, that you can't see around, oh, y'all don't hear what I'm saying. That is your mountain. Somebody shout, "Move"!

See, 'cause if you're not careful, the mountain will take your voice. You'll just stand there and look at it. You'll just get depressed about it. You'll be suicidal about it. You'll be ready to blow your brains out about it. But this morning, we're gonna open our mouths and speak to stuff. Somebody shout at the top of your lungs, "Move". Take me slow. Take me slow. The seed, the mustard seed is not to be not easily devalued, not easily underestimated. That's what I want to say. It shouldn't be underestimated. The mountain is what it is, let me explain. The mountain has no growth potential, but the potential of the mustard seed is limitless. The mustard seed will produce a mustard plant that will produce more mustard seeds that will fill up an entire field that will fill up another field. It is absolutely limitless, and though it looks smaller than the mountain, somebody shout, "Move".

Sit down, sit down, I'm gonna talk to you a little bit. Am I talking to you? I said am I talking to you? He's trying to explain to them why they fail. Maybe the demon showed off so bad that it intimidated you. 'Cause demons do show off. They make a lot of noise, and carry on, and foam, and fall, and often he falls in the water, and often he falls in the fire, repetitions of the same thing. Whatever you're going through now, you have gone through before. The names may have changed. Satan can't create, he can only duplicate. So, what you're facing right now reminds you of something you've faced before. And Jesus says it is not who made the most noise, it's not who showed off the most that won. He said you didn't win because of your faith.

If I want to see me, I gotta get a mirror or somethin' to see me, because my eyes are not designed so that they are positioned to see me. So, I can only imagine me. I can only imagine me. I can only image me. My imagination of me it's based on the image in my head of me. How do you see you? You see the mountain clearly. You see the mountain clearly. The mountain makes sure you see it. It has blocked your view of anything beyond it. Jesus is trying to teach us a lesson on small things. And sometimes our perception of being small comes from how we see ourselves.

Put Numbers 13:32-33 up for a minute, and take a look at. I think this will make it clear. "And they brought up an evil report of the land which they had searched unto the children of Israel, saying, 'The land through which we have gone to search it is a land that eateth up the inhabitants thereof. And all the people that we saw in it are men of great stature'". They big, y'all, they big. "And there we saw giants". It's big, y'all. "They're the sons of Anak", they're big, "Which come out of the giants. And we were in our own sight as grasshoppers". And because of how we saw ourselves, because we saw ourselves as little insects, and we saw them as giants, that's how they saw us. That's how they treated us.

David said, "Though a host should encamp against me, my heart shall not fear. Though war should rise against me, in this will I be confident". Sometimes God will send you in to do something, or to get something, or to be something, where he knows you are outnumbered, because the promise is not proportional. So, he doesn't need you to have equivalency in order to be able to win. Are y'all gettin' this? See, what I'm really preaching about is a stupid blessing. A blessing that don't add up, that don't make sense, that's out of order, that has no equivalency.

I need five people that got faith to find five people that got faith, and say, "It's gonna be stupid blessing". I mean, this is gonna be crazy. This is gonna be ridiculous. This is not gonna add up. It's not gonna make sense. It's gonna be outta time. It's gonna be off schedule. At the wrong age, at the wrong stage, at the wrong place. Slap somebody say, "I mean, stupid". Is there anybody in here that God's been talking to about a stupid blessing? C'mon here, preacher. Has God been telling you that he's gonna do something? You lookin' at your wallet, and you're lookin' at what God said, and you say, "Lord, ain't no way you gonna take this little bit". You're looking at yourself, and you say, "Lord, ain't no way".