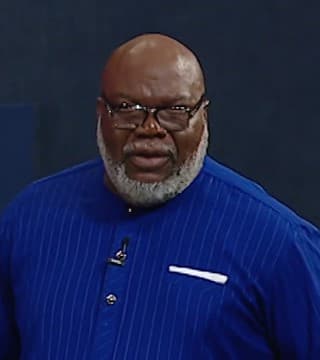 Now Judah is in a predicament because two of his sons are dead. Now when you read about it, that's not painful but if you experience it, that hurts. Two of my sons are dead, fooling with this woman, and now he decides. He says, You can come and stay with me and be a widow until my last son grows up and should he grow up, then I'll offer him to you and maybe we can do something then when my last son grows up. Tamar waited and she waited for Judah to keep his word, and his third son grew up, and Judah still didn't offer him to her, and suddenly she realized, he had tricked her.

Now he tricked her with good reason, he tricked her with good reason because he was afraid, he was scared of losing another son, he didn't want that pain to happen again. And like most people whose heart has been broken, we avoid anything that might put us in that position of vulnerability again. The only problem is in closing out the pain, we also close out the power. We're tryin' to close out the burden but we inevitably close out the blessing. In fact that's why the enemy allows us to go through failure, so we'll shut down our womb, close our possibilities, live in a vacuum, isolate ourselves to protect ourselves, so that nothing gets out but nothing gets in.

So we live our lives goin' through the motions, we're having fun but there's no impact. Because we can't afford to risk being hurt again we don't open up our hearts to love again because the last time we loved, something went wrong and it died. Tamar is stuck in the house with Judah and Judah is living with his daughter-in-law who is now a widow, and his wife is alive for a while, but then his wife died, his son was grown, his wife was dead, and all of a sudden Tamar said, hmm, I'm gonna have to do something because if I don't do something, nothing is gonna happen; that one decision changes everything. This is the statement that we cannot get out in the world today, that if you don't do something, nothing is gonna happen.

So the woman decided, "I gotta do something", so she took off her black veil and took off her black dress, and put on another costume that might have been a little bit more suggestive and went and sat on the side of the road where he was going. Somebody waiting on you, when they see where you're going and they get ahead of you and sit on the road, their waiting on you, and she waited. Ooh, y'all are quiet this morning, y'all, I have never seen y'all this quiet, y'all are listening to this message. I feel like Agatha Christie or somebody telling some of it here.

And as she sat there, he thought that she was a prostitute, and yeah, that's what happened and so they are bartering because he doesn't really have what is normally given. It should've been adequate to give a goat, since we are in a bartering society cash is not an option, a goat would have been sufficient, but the goat wasn't' there 'cause he wasn't planning to run into her. Don't laugh, you look guilty, look a little bit turned off, look a little bit violated by this, and we won't suspect you. But he came and he gave her, he said, "I tell you, what's it gonna take to do this deal"? And she said, "Well, if you give me your signet, you know if you give me a signet and you give me the things you got, I'll take them and hold them in proxy until you bring back the goat".

Now there is no mistaking me saying that, as long as the scepter remains in Judah, a law-giver will not depart from him until Shiloh comes. She has taken his stuff and he didn't mind her having it for a minute 'cause he thought he wouldn't get it back, but he is in a setup, because he slept with the woman and left, and when he got ready to come back with his goat, he sent his friend back with the goat and the woman was gone. Meanwhile, three months has passed and Tamar is starting to show, and she is dealing with the shame of being single and pregnant, and they come to Judah and they say, you know, your supposedly grieving daughter-in-law, she ain't as sad as she act like she is. She has moments of lucidity that allow her to experience something, she had some kinda joy 'cause she running around here, her ankles are swoll, she got a mask on her face and she throwing up every morning, somethings up with her.

And Judah got mad like we always do when we see other folks this weakness, we become righteous when you're wrong, it's always easier to be righteous when you're wrong than it is to be righteous when I'm wrong, and that they looked at her and they said, burn her, burn her to death. They knew she was pregnant, they say burn her to death, so he has no regard for Tamar, and he has no regard for the baby; he's gonna burn her and the baby. When you burn the baby, you burn the future, when you burn the baby, you burn the future, you burn a blank check of possibilities, you burn what could have been, what would have been, what should've been. You burn it all in one flash and one flicker and burning is such a vehement way to die, it's such an acrimonious decision, it's such an angry decision.

Who wants to burn a woman, a young woman, to watch her burn? Put it in your mind, smell her flesh, sense it. This is a strong statement, he doesn't say put her away, he doesn't say send her out, he doesn't say send her off, he doesn't say I'm ashamed of her, he says, burn her to death and her baby. And they came to get her and drag her out, and when they came to drag her out she said, just a minute, let me get my pocketbook. She said, something I want to show you, I knew that this was gonna come, so I kept this, I got a couple of things I want to show them. The man that got me pregnant, he gave me these little artifacts, I thought you should see them before you get these matches out, I think you oughta look at them for a minute.

And when they brought them before Judah, to his credit, he immediately owned up to it, these were his. Y'all didn't know the Bible had this kind of drama in it, huh? It's got all kinds of drama, we'll put HBO to shame, stay right in the Scriptures. And all of a sudden Judah is in this predicament where suddenly he recognizes the child is his, it just so happens it's two of 'em, she's pregnant with twins and they're his. She's pregnant with what he lost. God is trying to restore to him the two sons that he lost.

Sometimes God will use strange situations to restore to you, and had he burned the baby, he would have burned the answer to his prayers because God was trying to give him back his two sons. Isn't it funny how God will find a way to give ya back stuff, and sometimes the way he gives it back to you is so unconventional that you don't recognize it to be God, because God has a way of giving it back to you in the most unlikely way. It don't even come through the person you thought it was gonna come through, but when God gets ready to bless you, he'll turn your mistake into a miracle. He'll turn your test into a testimony. Oh, I wish I had a witness in here, I mean some real Christians.

My final point, they were getting ready to burn her and her baby, but when she showed him his signet and his scepter, she made him kin to the baby. Now in the Bible there's a phrase called kinsmen redeemer, you can only redeemed what your kin to. That's wisdom you should keep for other things other than theology, you can only redeemed what you're kin to, you can only help people that your'e a kin to, and 'til you are kin to it, you cannot redeem it. Remove yourself from it and you are powerless to change it. You have to get in there with it and be related to it.

That's why not everybody can be a great minister, you don't need a title to be a minister incidentally, but not everyone can be a great minister because they're not willing to be kin to the baby. They're not willing to risk their reputation on being related, they're not willing to do a selfie with nobody that... they don't want to go out and eat but with a certain class of people 'cause you don't want to be kin to it. I wish you well, I hope you do good, I want you to, you keep it to yourself, because you cannot redeem what you are not kin to. She through that stuff down at him and said, "Burn me now".

Yeah, baby, I promised him I would, and for 43 years I have not failed. This is what I want you to get and I'm done. It's so simple and so hard, it's simple and simple things are hard. What I want you to get is that you have the power to re-frame your entire story. Do you hear me? You have the power to reframe your entire story. You don't like staying there, don't stay there; you want to go back to school, go back to school; you want to open up a business, open up your business. It doesn't matter whether it win or lose, if you want to go see, go see. You have the power to reframe your life, I want to break the spirit of victimhood that exists amongst our people, that you are always a victim.

Now I'm gonna wax racial for a minute, something I seldom do, but I'm going to wax racial for a minute. This is not to say that it can't happen to white or brown people, but it definitely happens amongst black people. When you came here a victim, your parents couldn't teach you victory in a slave hut, they could only teach you how to survive as a victim. And so, survival became your success. As long as you came here a victim, all you can pass down was victimhood, until you run into somebody in the genealogical line who says, "Wait a minute, I'm better than this, I'm not takin' it anymore, 'He whom the son has set free is free indeed'".