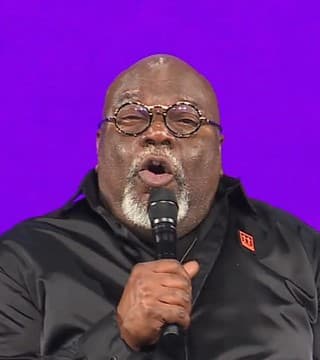 Oh y'all not going to help me. When you come from a disadvantaged background, you're not as threatened and intimidated by what the enemy is trying to do because you have already been there and done that. And you know that if God be for you, he'll make a way out of no way. You know that if God is on your side, he'll pull you through. Somebody asked me, said, "Don't you feel funny preaching in a building where there ain't hardly nobody in the room"? I said, "Not at all. I cut my teeth preaching in an empty building".

I cut my teeth preaching by myself, slapping my leg, bringing my own amen, shouting hallelujah. I never did need the power of the crowd 'cause the power I got comes from the inside. When you already been disadvantaged, you don't back up easy 'cause you know who you are. Set the record straight. All you did was set me in my natural habitat. There is an advantage to the disadvantage. This woman has nothing to lose. She's down anyway. She's rejected anyway. She's ostracized anyway. She's been ignored by her adversary anyway. To be ignored from the judge wouldn't make her any less than she already was.

There is an advantage to being disadvantaged. Let me tell you something. Disadvantaged people fight differently. Disadvantaged people have the ability to survive differently. Disadvantaged people have a toughness that is born out of their affliction, so much so that the Bible said, "It was good for me that I was afflicted. If I had not been afflicted, I would never see the glory of God". It was good you rejected me. I feel like calling all of my enemies and sayin', "Thank you. Let me send you some roses. I'm glad you didn't help me. If you would've helped me, I would have had to thank you for where I am. But when you rejected me, I don't have nobody to thank but God".

Who am I preaching to? I feel a praise about to break loose in this place. You oughta be glad they left ya. Leave me if you want to. Watch me scratch my way out. I'll dig with my fingernails, I'll claw by my toenails, but I'll never need you. Hey, hallelujah! I'll shout in this church by myself. Somebody give him a praise!

She had no status. She had no recognition. She had no political influence. She had no money for a bribe. The only thing she had going for her was her persistence. You have to be persistent. You have to be relentless. If you're going to break through the systems and the strongholds that are in the world today, you have to be tenacious. You can't just sit back and wait and hope it happens to you.

There's something you get from the struggle that prepares you to survive when Mama and Daddy are not there anymore. Stop making everything so easy for them. Put 'em in a condition and a circumstance where they have to fight their way out, because you're not always gonna be there to take care of them. You're not always gonna be there to help them think. They've got to be able to think for themselves. And you're doing them a disservice because you gotta teach them the advantage of being disadvantaged. Oh my God from Zion.

I remember the first check I ever got in my life. I got it from cuttin' Miss Minerva Coles's grass. Miss Minerva Coles was a woman who lived in West Virginia, and her lawn was on a hill, and you had to cut the grass. It was one thing for an eight-year-old boy to cut grass on level ground, but I had to cut it on a hill, which meant I had to cut the grass and let the lawnmower go over the hill and then pull back up, and then push it back down again and pull it back up. And I was eight years old, and I was sweating, and it was hot, and I blistered my hands. And I worked all day to cut Miss Coles's grass and she gave me a check for $8.

This woman, this nameless, manless woman comes to this powerful judge. And I want you to see how she started operating in a dimension she didn't live in. It wasn't like she was used to hanging out with the judge at the golf course. It wasn't that they belonged to the same country club. It wasn't that they'd hung out at the same five-star restaurants. It wasn't that she had a previous relationship with him. She was out-classed. She was in a place that she didn't fit. She probably wasn't dressed right. The only thing she had goin' for her is she kept coming.

And here comes this woman into a neighborhood she can't live in to meet with a man she doesn't know to have a conversation she's not used to to debate a law she didn't study, but she kept on knocking. Oh God! I don't know who I'm preaching to today, but the Holy Ghost said, "Keep on knocking! Keep on fighting! Keep on praying! Keep on getting up"! And then the Lord allows us to hear what was in the judge's mind. Most of the time, we hear a judge give the verdict. We get the verdict, but we don't get the thought. But in this particular text, the Lord indulges us with an opportunity to get classified information. He doesn't just tell us what the judge decided, but he says what the judge thought. The judge said to himself, "Hmm, I better do something about this woman 'cause she's gonna keep bothering me. She's gonna keep bothering me".

This one woman, little by little, the judge began to break and said, "I better do something about her because she is bothering me". Now, hear me when I tell you. This is what I want you to understand. Because she bothered him, she moved God. I came to tell you, don't give up. Sometimes I've had people in my life who say... they had my number, you know? They say, "I don't call you 'cause I don't want to bother you". And people who don't bother you, you forget. Their politeness kills the intensity of the relationship. If I didn't want you to bother me, I wouldn't have given you the number. I can't tell you how many opportunities I lost bein' polite 'cause I didn't take seriously the fact that somebody really wanted me in the space. But this woman said, "Invitation or not, phone number or not, I'm gonna bother you 'til I get a breakthrough".

Oh, my God. Bishop Jakes, can you prove it? Yes, I can. Let me leave this woman alone and go down into Egypt. And there they were in Egypt and they had been slaves for 400 years. And the one God sent to deliver them had to run away and was living in Jethro's house, but the slaves kept bothering God. They kept on praying. They were bothering a God that they hadn't worshiped for hundreds of years. But what they couldn't remember of him, they kept on bothering him. Moses was settled in Midian. He had a good job. He was in a good place. He was doing his thing. He had a safe position. But the Bible says that while Moses was taking care of the sheep, God appeared in a burning bush and said, "Moses! Moses! Take off your shoes. The ground you're standing on is holy ground". Why are you bothering me, God? God said, "I heard the cry of some slaves. Go down there and tell Pharaoh to let my people, let 'em go".

COVID-19, let God's people, let 'em go. Depression, let me go. Fear, let me go. Anxiety, let me go. Worry, let me go. A bunch of slaves prayed until God disrupted Moses's life and sent him back to Pharaoh and said, "God said, 'Let my people go'". Honey, it never would've happened if the slaves would have stopped praying. They would've died slaves. They they'd never made it to the promised land. But in spite of their lowly position, they use what they had to get what they wanted. And hallelujah, because they bothered him, they got delivered. Touch somebody in your house, wave at 'em, high-five 'em, hit their elbows, blink your eyes at 'em, wiggle your toe at 'em, and say, "Bother him".