TD Jakes - Your Breaking Point is Your Breakthrough Point 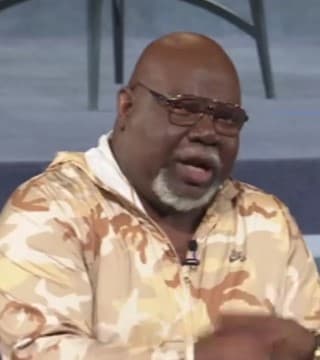 Everything has a breaking point, everything. In the company I used to work for, they would rate different types of equipment by their PSI. And the PSI just meant how much pressure that particular machine was able to absorb, the pressure rating. It's strong enough to absorb a certain PSI. If you go beyond that, you're going to destroy it. A car engine has an RPM. It's rated to be able to go at a certain speed. It's rates per minute. So, at a certain RPM, it can continue to handle. If you'd go beyond that, there's no guarantee.

Jacob is, oh my God, he's at his limit. I want to talk to somebody tonight who feels like you're close to your limit. And if you're like me, whenever I get close to my limit, not only am I suffering from the pressure of being close to my limit, I'm suffering from the embarrassment that I have a limit. Because deep down on the inside, I think I oughta be strong enough to absorb everything. I don't care what they hit me with. So I can be close to my limit and not even tell anybody that I'm at my breaking point, because I'm ashamed that I feel... oh, y'all don't hear what I'm, saying.

When you are a Christian and a believer, there's another level of anxiety that comes on you, because you feel like "I can do all things through Christ that strengthens me", and so I shouldn't have any limit at all. Christ has no limits, you have a limit. Christ can do anything. He can absorb anything, but you have a limit. "Well, it said I can do all things through Christ", but you're not just doing it through Christ, you're doing it through flesh. So, you gotta go to bed sometimes.

I told you that Jacob had had a series of winnings, but oh, he's also had a series of loosings. He has lost a lot of things. He loses his wife, the love of his life, the one that he's labored to have. He loses her after laboring 14 years to get her. He loses her first. She's barren and then she has a child, and then she has another child, and the birth of that last child killed her. He lost the love of his life. He's taken some real blows in his life. To finally find the love of your life, number one, that's the miracle, number one.

See, every time you survive a blow, you spend something. Every time you come through a fight, yeah, I might have won the fight, but it cost me somethin' to win the fight. And now I've spent so much, I'm not sure that I've got enough left in me to fight this kinda fight again. It is too much. I feel like I'm talking to somebody who knows what I'm talking about. You've had some wins, but you've had some losses, and the sum total of the losses somehow always screams louder than the victories. Oh, y'all don't hear what I'm sayin'. The sum total of the losses always sounds louder than the total of the victory.

Now, not everybody who's watching this video knows what it feels like to have everything close in on him. But I'm a good one to preach this, because I understand what it feels like to have to feel like it's not true, but feel like, feel like everything's closing in on you. And the old man, he says Jacob is gone and Simeon is gone, and you want to take my last Benjamin and take him. And he says all these things are against me.

When your soul gets tired, you start yelling at the kids, and slapping the dog, and kicking the cat. When your soul gets tired, Jacob's soul was tired. I feel like preaching. I feel like preaching. Jacob's soul was tired. I wanna talk to somebody who's soul is tired and you're bent over on the inside. You standing up on the outside, but you're bent over on the inside. And you feel like oh my God, all these things, these things, it's a whole collection. It's not one thing. If it was one thing I'd have whooped 'em If it was two things, I would have whooped 'em, but it's not just one or two things, it's all these things. All these things are against me. Look at how he interprets it. It's against me, not my son who's in Egypt, but it's against me.

Look at how he interprets it as it being against him, even though the attack was against them. Because it was people he loved, he said it was against me. See, sometimes the pain we carry is not our own. Sometimes the pain we carry is pain we adopted. It belongs to somebody else. It happened to them, but it affected you. And now the old man is standing there, he's free, he's alive, but he's not enjoying his life, 'cause he says all these things are against me. Jacob has counted up what's wrong, but he has not counted up what's right. And I'm just wondering this morning, have you spent as much time counting up what's right as you have counting up what's wrong? All these things are against me, and alas, I'm at my breaking point.

You gotta understand, when you have been other people's hero, there's a shame that comes on you when you need the help you gave. When you're always the one on the giving end, there's a shame that comes on you that you need to be encouraged, that you need to be uplifted, that all these things are closing in on you. And very seldom will we even utter the words, we'll just silently erode like sands off the banks of a riverside, never scream though they are dislodged. In the silence, the constant friction of life, the friction, the going, and coming, and getting up, and going to bed, and dealing with this, and dealing with that, and answering the phone, and handling this, and handling this one, and handling that one. And little do you know, everything that you went through, and everything that passed by you, eroded a little somethin'.

He says, all these things are against me. And he is at the breaking point. And his son says to him, oh, no, Daddy, no, Daddy, I promise you, on the lives of my two sons, I am going to get Simeon back. I'm gonna get him back, Daddy, I'm gonna get him back. Calm down, I'm going to get him back. These are the family discussions that nobody ever talks about. Oh, no, you don't put this on Instagram. This is not what you put on Snapchat. No, no, no, no, no, this is not goin' on Snapchat. No, no, no, you're not gonna FaceTime and talk about this. These are the discussions that go on behind closed doors, when you're at a breaking point, it affects everything in your house. You smile for the picture, but as soon as the picture is over, the grimace returns, because you are at a breaking point.

Can you imagine what it was like to be Jesus? And the cross will be too heavy, and your disciples are lookin' at you, and they saw you walk on the water, and heal the sick, and raise the dead, and now you're stumbling around with a cross that's too heavy. If Jesus said this weight is too much, if he's stumbled up under the pressure of the load of a breaking point, and somebody had to come and get up under him, who are you to think that you can handle all kinda weight, and take on everybody's problem, and fight every battle, and land on your feet? He said all these things are against me. That's what he said. That's how he perceived it. That's how he saw it, but that's not how it was.

Oh, I want to make a distinction between how you see it and how it is. The young folk have an expression talkin' about keeping it real. They think telling their business is keeping it real. Keeping it real is separating how you perceive something from how it is. Jacob perceived that all these things were against him, when in reality, all these things were working for him. Number one, Joseph was not dead. And if it were not for the famine, he would never find out that Joseph was not dead. Number two, Simeon was gonna be reconnected to him again. And if it were not for the famine, there wouldn't be this big family reunion. And everything, you can't handle this, I said everything that Jacob had lost was about to come back into his life again.

I feel a spirit of prophecy on me right now. I'm prophesying to somebody. It looks bad, but it's gonna work out good. They meant it for evil, but God's going to make it good. You cried all night, but joy is coming in the morning. You're bent over now, but you're gonna be standing strong in a minute. I came to tell you your breaking point is your breakthrough. God is about to give you a breakthrough. I know the devil don't want you to believe it. I know your flesh cannot receive it. I know your mind cannot encompass it. I know the evidence does not verify it. But my faith is my evidence. It's all the evidence I need of the thing that I have not seen.

The reason I chose this text, oh, you got me excited. The reason I chose this text is because Joseph perceives it, Jacob perceives it one way, but God perceives it another. Jacob thinks he's at a breaking point, but this is the beginning of his breakthrough. So, they load him up, and say come on, Daddy, just trust what you can't trace. Believe what you can't see. Come on, Daddy, get on in the cart by faith. Everything's gonna be all right. It's all gonna work out. And step by step, moment by moment, God was leading him into Egypt where he would be sustained the rest of his life. The rest of his life. The rest of his existence. He would not want for bread, he would not long for water, God would supply all of his needs through foreigners, through outsiders, through people who had nothing to gain. God had positioned Joseph to be in the right place at the right time, so that when his father was at a breaking point, his son had come into his own.