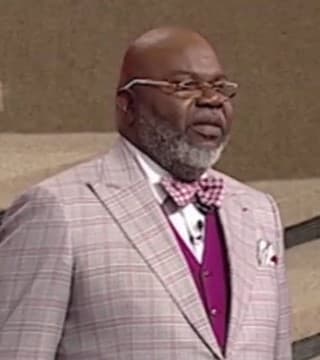 So, this is a crash course in fatherhood. Push has come to shove. Push has come to shove. He's got responsibilities at work. He's got people looking at him with expectations. He's got people who look up to him. He has some authority, which is important for a man, because when a man has no authority, he has no potency. We gotta have power over something. And when you take our power away, you've taken our strength away. So, watch out about singin' "I am woman, hear me roar", because you may roar alone. Because power and influence gives us potency.

And he is a young ruler (Luke 8:41-56), and he's got it going on, and he's winning over here, but his daughter is dying. So, the crash course that every father must take, at one time or another in your life, is the test of priorities. When you are torn between this and that, which one will you go to? This is not about making her recitals. This is not about ballet practice. This is not about choir rehearsal. All of that's wonderful, all of that's good, but he might have messed up all of that, but the girl is dying. And she is dying for the lack of his attention. Because you can be winning over here at the expense of losing over there.

I bring this to you today, because I am concerned that most men who go to church today, most of them go to church without ever changing their priorities. They go to church, that's old school, ain't it? They don't do that no more. They got somethin' else they do, but I can't show you. I can't figure out how you get your pants down there and they don't fall. I would've had to stitch mine or has safety pins holding them. Anyway, I'm in that mood today, you just gotta deal with it.

Most man go to church today, and this is what's on my heart, and they like the idea of faith, but to really sacrifice and fully engage, there are many men in this church who have never really considered giving your all to Jesus. You have never really considered really cleaning up your act, and really bein' a real Christian. What you are is a church guy. You go to church, but you don't really pray or nothing, or really seek God, or really read the Bible. You go to church for whatever reason. It gives you some, you know, it's cool. But to really become a man of prayer, no matter how I preach, we have never considered really seeking Jesus until something's dying.

I want to ask you brothers, what will it take for God to get your attention? How many things will have to die before you come out of your pseudo-Christian attitude and really drop down on your knees and throw your hands up and say, "All to Jesus I surrender. All to him I freely give"? Jairus's only daughter what? His only daughter is dying, and God uses it to get him away from what he does. I'm not talkin' about quitting your job. I'm not talkin' about leaving the area you're in. I'm talkin' about that when push comes to shove, everybody around you needs to know that they are ultimately more important to you than what you do. Number two, Jairus teaches us about patience, because he is bringing Jesus to his daughter.

Now, let me tell you, speaking on behalf of a father who drove the car off the edge, one wheel off the edge of the driveway when Serita was having a baby. When we are after somethin,' we go hard after it. I don't want anything in my way. Get outta my way. I got to move. I'm on the way to the hospital, gotta go. Don't expect me to be spiritual if you get in my way, I gotta go. I'm spiritual, I love Jesus, but if you get in my way, I will have to hurt you. This is important. When a man thinks something is important enough that you went for help, you are serious about it, because mostly, generally, we won't admit to anybody that we got any trouble. If the trouble gets bad enough that I went for help, I don't want any interruption.

This woman wreck the plan, and Jesus wanted the plan to be right, because he must pass the test of number two, patience. He has to stand there and wait for this woman he doesn't even know to crawl across the floor and get a healing, and then they gotta have a debate about who touched Jesus, wait for her to come to herself, and stop lying, and come out of the crowd and say, "Yeah, I did it", and now they got to hurry, get to Jesus, but he has to hold his peace.

And he's just about to lose it, and everybody's aghast, and Jesus says, "It's cool, I got this". I meant for bad to get worse, because I'm not gonna be your daughter's doctor, I'm going to be her resurrector. And I allowed your bad to get worse, so you could discover what I'm worth in your life. I want you to see me strut my stuff. That if you will just trust me, even when it looks like your life is out of control, when I get through working it out, you're gonna rejoice like you've never rejoiced before, because I got this.

So, Jesus said, "Peter, James, and John, Mom, and Dad, you can come closer", so they come in the room, and then they're all mourning, and Jesus says, "She's sleep", and they started laughing. And their laugh canceled out their opportunity to be in the room. 'Cause anytime you think God is joking... Hey! Hey! Hey! Anytime you think God is joking, you cancel out the opportunity to witness his handiwork. Anytime you believe what you see more than you believe what he said, you cancel out your opportunity to be in the next room.

So, sit down, I'm just talkin' to y'all. Why y'all keep jumping up like that? I told the visitors they didn't have to stand up no more, and y'all are messing it up. You mean, Lord, you're putting me out of the room? You put Peter, James, and John out of the room? That's your inside circle. You put your committee, you're board out the room? You put Mom and Dad out the room, and it's our daughter? Sooner or later, every father and mother has to learn to give your children privacy with God. Sooner or later, you have to cut that umbilical cord and leave them alone with God, and trust that if God was God enough to raise you, if God got you through all that crazy stuff you did, and God delivered you after you made all those mistakes you made, you gotta, sooner or later, say to your kids, "I commend you to God, and to the word of his grace, which is able to build you up".

Daddy can't do this, Mama can't do this, here it is, I leave you alone with Jesus. The battle belongs... oh, some parent ought to shout me down right now. You did everything you can do, you said everything you could say, you opened every door you could open, you did everything you can do, now you gotta leave him alone. And he gives us this course, even though he flunked it. I wanna warn fathers about getting in the rooms you don't stay in. You prayed your way in, but can you stay? Political figures often build a task that can get them elected but then don't build a task to perform the function of the office. Sometimes you're better at getting in than you are staying in. Am I helping anybody? Finally, with everybody out, and no witnesses, God reveals his power.

Number four, with no witnesses, God reveals his power. Think about this for a minute. How many times have you prayed for healing, and got healed, but don't know when? How many times have you prayed for things to get better, and it got better, but you don't know when? You just looked around and said, "It's better, I'm feeling better today. She's acting better today. The kids are doing better". Because God does not need your input to display his power. When God gets ready to bring you out, he can bring you out without a witness. He can bring you out so fast, you don't even know how you got out.

Touch somebody say, "Power". The power of God will work all by itself. The power of God will walk over to a girl that you know is dead, you are sure she's dead. She's so dead that you laughed when I said she was asleep, and yet his power spoke to a dead girl. What are you doing talking to a dead girl? Don't you know that dead people can't hear? He said my words are Spirit, and they are life. He got over in a dead ear, and said, "Talitha cumi". Damsel, arise. What do you mean arise, I'm dead? You were dead 'til I said it, but when I speak it, you are not it, get up!

Slap your neighbor and tell 'em, "I was dead 'til I got this word". My finances were dead. My peace was dead. My joy was dead. My wisdom was dead. But to life I... somebody give God a praise for power. Can you imagine, stand to your feet, can you imagine when the test was over, when the test was over, and Jesus opens up the door, with little JJ, Little Ju-Ju, Little Nay Nay, Nookie Sue on his arm? Come on, baby. Come on, now. She comes down on his arm, and you say, "Lord, if you were gonna raise her, why did you let her die"?

Here's my problem. If God is omniscient, and he knows all things, and if he's omnipotent, and he has all power, and he can do anything, and if he's omnipresent, and that means he's everywhere, if he can do anything, why didn't he just heal her without coming? And if he knows everything, didn't he know that talking to that woman was going to let that girl die? And if he's omnipresent, why did he have to go when he was already there? That's my question. I cannot figure out why does God let things go wrong, when he already knows he's gonna fix it. Why didn't you just leave it well? And the answer says it was just a test.