TD Jakes - Ripped for a Reason 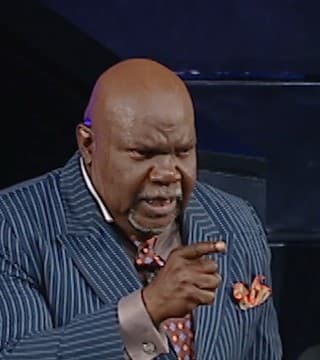 You must understand, that this ripping is always a tear, and a tear is always painful. It costs something to get into the next dimension. It costs you something to pass from death unto life. It hurts to step into the next dimension. You don't dance through the veil. The veil is ripped. Not unzipped. Not cut. The veil is ripped and God wants you to know who's doing the ripping because anytime you have ripping, you have pain. And anytime you have pain, you think it's the devil, but God said the veil in the temple was ripped from the top to the bottom. God said, "The devil didn't rip you. I ripped you".

I gotta stop there. What was in the box is what matters. You spend all your time working on the box, but it's what's... You look gorgeous this morning on the outside but nobody has to live with your outside, they have to live with your inside. Have you ever met people that you wish were is pretty on the inside as they were on the outside? We spend billions of dollars in this country fixing up the box.

See, Christ walked amongst us as a box. But he couldn't redeem us as a box. The alabaster isn't what in, what is important about this woman's offering. In fact, the only thing that was important about the alabaster is that it was made of a material that was designed to hold the essence and the aroma of the content was locked inside the alabaster. So if that ointment was precious, you put it in alabaster so that no longer how long you kept it, it would be just as potent when it was released as it was before.

We have the treasure, but we have it in earthen vessels. Christ is our redemption, but he held it in an earthen vessels. The Holy of Holies is where I'm going, but I had to get through the veil to get it. Here comes this woman in with an alabaster box; some theologians say it was a year's wages that she had saved up to give to Jesus. And she came in. She wasn't even a good woman. Look at the dichotomy. She wasn't even a pure woman. She, she was a kind of woman that when she came in the room to church folk would talk' about her.

God always works with the opposites. He didn't say, "My strength is made perfect in strength". He said, "My strength is made perfect". So when, now, now, I'm gonna date myself. I'm kinda old now. But when I went to school, they used to give you a picture, and they say, they have a living room, they have a couch, and a chair, and a coffee table, and a refrigerator, and at the bottom it said, "What's wrong with this picture"? And they were tryin' to see if you had you know, good deductive reasoning skills to have associative skills to be able to determine what should not be here. What should not be here. What should not be in this room is this trashy woman. And Judas sitting murmuring and talkin' about, "He don't know she a sinner".

See, when people start taking God for granted, they tryin' to decide whether they're gonna worship him or not, but when you know you're a wreck, when you know you don't have no right to be in this room at all, when you know they talkin' about you and half of what they said is true, you don't just open a little bit. You break the box. I wish I had some folk who have done some mess. You know you're here by the mercy of God. Break that box. Yeah. Yeah. Yeah. Yeah. Yes. Yeah. Yeah. I do not understand why you would get out of bed on the few, on one of the few days that you had to sleep in. Take a shower, get dressed, get the kids together, get in the car, and come to church, and then sit here and look stupid. If you gonna come in here, you oughta just...

That's how you're going to change the things in your house. Down at his feet. You're gonna break the box. That's how you're gonna change things on your job. Down at his feet. You're going to break the box. You don't have time to worry about what people think. You gotta get down at his feet. If I don't break it. Young people, if I don't break it, I will live a life of ineffectiveness. Having potential that is never realized, is not that it's not in me, but until I get what's in me out of me, having it in me doesn't change the atmosphere. Nobody could smell it till she broke it. You got it, but because you insist on acting like you got it all together, we can't smell it, but if you get down at his feet and break the box...

Now let me show you. Oh my God. When the alabaster shattered, the oil spilled out and of all the things that had happened to Jesus in all of his life, it was this one thing that he said, "Wherever the gospel is preached, remember this woman". This woman and they were talkin' about. This woman that they were murmuring against. This woman that didn't even have no business to be where she was. Remember the teachings of this woman above wherever you preach. What is it about this woman? He said, "Remember her", watch this, "Because she has prepared my body".

I was preaching many years before I understood that when she broke the box and the ointment spilled out, and it filled the atmosphere with aroma, she reminded Jesus the reason for the ripping. That, if it doesn't break, it's not effective. When she broke it at his feet, and the ointment came out, he said, "I'm ready now".

See, we are not like Jesus. We are like our pictures of Jesus. We want to be effective and pretty. But in order to be effective, you got to be ripped. So if God put a great anointing in you, if God gave you a great ministry, if God gave you a great gift in your life. You will go through a ripping and you have to know that you were ripped from the top to the bottom, and not from the bottom to the top; because whenever God allows you to be ripped, it is for a reason.