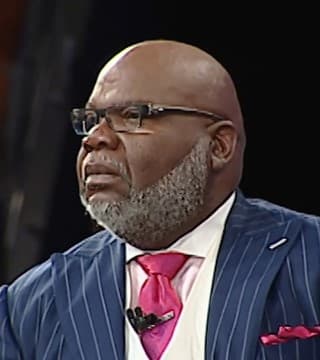 And he shook the same cup, a beggar on the highway just passed Jericho, where all the people came before they went up the hill to Jerusalem. The Jericho road, the winding road, the place where commerce, and traffic, and business was done. They set him in a thoroughfare where there would be lots of opportunity for him to beg. And he sat out there with his coat wrapped around him, and his cup in his hand, his coat and his cup, and his coat and his cup, shaking his cup and holding his coat, expecting to receive whatever someone would drop into his cup. He made his living through their benevolence and through their mercy. He made his living through their benevolence and the mercy, and it had become a system, a routine.

There's a reason that panhandlers hang out in front of restaurants. They know that you have just got through eating a scrumptious meal. They don't have to say anything, they just sit. Right about the time you're about to burp, they just look at you. There's a system. There's a reason that panhandlers stop by red lights and hang around places where you got to stop in your nice car. And they just look at you. Opportunity is always built on accessibility. If you are not accessible, you lose the opportunity. Every day they set him on the highway. I believe it was every day, just like the lame man at the gate called Beautiful, because every day they set him there.

There is a way that you get in a system that becomes a routine, that becomes a practice for you to live with whatever you got to live with. That will not go away, and I don't care, where you go, you always come back to your spot, your survival spot. It's how you deal with whatever you gotta deal with. The blind man comes there every day. Nobody would have known that he had a problem with it. After all, blind people survive by doing the familiar. I know how many steps it takes to get to my spot. Don't move me to somethin' that's different, because I've already counted the steps. I'm at my spot. Isn't it amazing how you can get into a system of survival and be doing something every day that you hate, but still be committed to it even though you hate it, but it is your normal?

It is your system, and again, blind Bartimaeus sat quiet, except for the begging, until one day there was a disruption. When I started preaching this in my head, I am attracted to the text, first of all, to let you know that you have built a system to accommodate what doesn't work in your life. And you have survived by counting the steps and getting used to something that is abnormal, but it's your normal. And when it's your normal, you can be loyal to something that you are really sick off, and if anybody tries to move you, you will fight them off because you've already counted the steps and you know how to deal with it. And every day he sat. He sat until there came a disruption. I came to tell you that there's about to be a radical, revolutionary disruption in your system.

Now, the reason some of you are not glad about it is because you are so addicted to dealing with things your way. You're blind and bossy. In other words, you are the boss of your blindness. You control the parameters of your situation, and if anybody tries to move it, you move them out of the way, because you've got something that you think is working for you. Even though it doesn't work, you're thinking does work, 'cause it's built around something that you think cannot be changed about you. But God said I'm getting ready to disrupt your entire system.

Who would have thought that calm, meek, mild-mannered, Bartimaeus would just start acting a fool, just out of the blue? The nice man who sat there every day, begging alms, freaked out and started hollering. He opened his mouth and started screaming. Oh, my God, he couldn't open his eyes, but he opened his mouth. Isn't it good that God doesn't let everything shut down at the same time? He said I can't see, but I can holler, "Hey"! What in the world are you doing? If you don't break your routine, nothing is going to change. If you are that frustrated with where you are in life, and yet refuse to do anything different, you will always be where you've always been, because you always do what you've always done.

Oh, but the Lord promised me that there'd be a few radical people in here that will give a... Wait, I need to apologize to all you nice, neat, conservative Church people, because there's somebody behind you or beside you who is just acting a fool. You dignified people can't understand this kind of behavior, 'cause you got so much going for you that you have never needed to just... I want to point out something, just a minute, I'm talking, I'm just talking a little bit. I wanna point out to you there was a scream before the scream. I'm talking about the silent scream, a frustration. Every day that he was acting quiet, he was screaming on the inside. I was talking to a brother the other day, and he said to me, he said, "Pastor, it's like I'm screaming and nobody can hear me".

All the while he was being obedient and going to the spot. "Don't wanna be no trouble, boss". Loyal to a system that was frustrating him. If you could hear the noise going on inside of the person sitting next to you. I know they're not sayin' nothin,' 'cause they have had obedience training, and they don't act up like that in front of people, but when nobody's lookin,' at two or three o'clock in the morning, and they're left alone with God, Bartimaeus was frustrated. Even though he has built a system around his blindness, even though he has survived his blindness, even though he knows how to make it with his blindness. it doesn't mean he likes it. Have you ever developed a system around something you hated? And said to yourself, "It is what it is. I got to do what I gotta do. I gotta make the best of a bad situation".

One of the things that I love about this season, about this time of year is that God does not hide the story from us. He shows us that life has struggles. That we follow Christ through his beatings, not just his miracles. We follow him being nailed to a cross, not just him walking on water. We follow him down to the graveside, and we learn a powerful lesson. That God will not get you into anything that he will not get you out of. So, while we commemorate, and acknowledge, and worship, and thank God for what this season means to us as Christians, more personally it means something to us as individuals. It lets us know that you may be down on Friday, but you're coming out on Sunday. This is our season, our celebration, and our divine, supernatural message from God that, "I got your back".

When blind Bartimaeus heard... Now I'm gonna hook 'em together, that Jesus was passing by, never mind you, it didn't have nothin' to do with you. He didn't hear that you was passing by, he heard that Jesus. And they told him, "Shout out", and blind Bartimaeus said, "This ain't none of your business". Touch your neighbor and say, "This ain't none of your business". Now, holler for Jesus. You got to know when you can't afford to let other people's opinion stop you from going after what God has for you. When it's your time, open your big mouth and holler. Look at your neighbor and say, "I'll holler again".

See, this is what's wrong with us. If it don't work the first time, we give up on our dream. But when you ain't got nothing to lose, you're not... we gonna do a quick disclaimer, that's what I'm talkin' about. Tell your neighbor, "If you're nervous, you might better move, because there's something I want from God this morning", and whatever it takes, whatever it takes, whatever it takes. See, I want you to understand that the first holler didn't stop Jesus. You can't do right for a weekend, because the first holler never stops Jesus. But this is a week, you gotta understand, preachers, this is week that, Jesus can't afford to be late. For this purpose came he into the world. He has an appointment with destiny. He has to be in Jerusalem by a certain time. He has to work it against the Sabbath, so that everything is lined up right, so that this won't be an execution, but an offering to God. And you can't just offer God anything at any time. He cannot afford to be late.

I know you don't want to arrest him, 'cause you just got your hair done. I know you don't wanna arrest him, 'cause you got on your, this morning, but if you want a breakthrough, if you want a healing, if you want deliverance, if you want a yoke destroyed in your house, I don't know who this is for, but the Lord gave me this message for this place today. You gotta stop letting the enemy set you in the corner and beg for what is rightfully yours. Touch everybody you can reach, and say, "Arrest him". Everybody, get in the aisle and tell 'em, "Arrest him", with your praise, with your mouth, with the fruit of your lips. Get God's attention, arrest him. If you keep praising him, he's gonna stop, he's gonna stand still if you don't praise him.