TD Jakes - Ripe For A Miracle 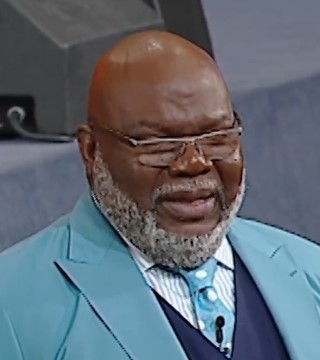 Hey everybody, now more than ever it is so important that we stay together. Through technology we have the opportunity to do that. I want you to use everything at your disposal to get the Word. As he gives it to me, I want to give it to you. And I want to believe God with you, that every need in your life will be met. I know these are tough times. We've never seen anything like it before, but we've got a God that's able to meet tough situations. And I want to agree with you in prayer that God would supply every need, whether it's healing, whether it's financial, whether it's emotional, mental, every need. Father, in Jesus's name. I thank you for being the God that supplies every need according to your riches and glory. I thank you Lord for being Lord of the whole Earth. I thank you Lord that you Lord in the Earth and under the Earth. I thank you that you'll Lord over this virus. You'll Lord over every circumstance. You'll Lord over politics. You'll Lord over confusion. You'll Lord over any spirit that the enemy can send out of the pits of hell to try to prevail against us. You are greater than that. And we claim that victory in Jesus's name, amen, amen, and amen. Now you go walk in that victory and be blessed.

See, he was lame from his mother's womb. So he had all of his childhood to develop a way of doing the best he could with what he had. When you've never had something, never had like love, never had peace, never felt safe, you develop a coping mechanism so that you can survive in spite of what you never had. Now if I used to walk, and then all of a sudden I can't walk, at least I have something to compare it to. But if I have never walked, I've never been normal, I've never had those, then my hope of it dies because I can't visualize something that I have never experienced. If you've never been loved, eventually you start telling yourself stuff like "I don't need nobody anyway". Because we all have a narrative that we tell ourselves to help us feel comfortable with what we don't have. His way of coping is that every day he has built around him people to carry him. Yeah, I'm not gonna hang with you 'cause you won't carry me. I don't want you 'cause she won't carry me. But if you carry me, you can be my friend. I choose people by what's wrong with me. That's what lays before us today.

A man who has chosen people by what's wrong with him. Let me see you, I don't know if you're strong enough to carry me. I don't know, but if you're strong enough to carry me, then we can be friends. These co-dependent relationships often erupt in the lives of people who have given up on being independent. I need you in my life because of what doesn't work. And not only that, it causes people to be attracted to you who need to be needed. In other words, I love you 'cause you crippled. Wilt thou be made whole? Because, see, some people don't want to get better. Because better would disrupt your system. Better would make you have to be responsible. Better would take away your excuses. Better would make you have to face the fact that you can do whatever anybody else does.

You don't want to get better. Oh God, I'm going to help somebody. Some of you have been trying to make somebody get well who doesn't want to get well. They liked being crippled. That's all they ever knew was crippled. Can I preach this thing? Every day they laid him at the same spot, and there he sat at the gate called beautiful. And Peter and John came up at the hour of prayer. They're coming to heal the crippledness of the temple, but they run into a man who is stuck at the gate. And they stopped 'cause he confronted them asking alms. And they said, "Look on us".

Now listen to this. He didn't ask them for healing. It wasn't like he was laying at the gate talking about I want to walk. Now the reason, I don't want to talk bad about him. The reason he didn't want to walk, I don't want to make him look bad. The reason he didn't want to is that he hadn't been exposed to it. Sometimes people don't want better 'cause they've never seen. I'm not saying he never saw anybody walk. But that was for them people. Yeah, yeah. It's all right for you to be able to walk, but I cannot see myself walking because I have never been able to walk. I couldn't walk when I got here. I didn't crawl when other babies crawl. I didn't stand up when other beggars stood up. I didn't take my first step when other babies took their first step and sat down in the floor.

I have never had it. Don't take me away from my normal 'cause that puts me in a scary place. I've always had to be nasty. My whole family was nasty. I survived by cussin' people out. Don't take me away from my normal 'cause then I have to explore something for which I have no experience. So I'm not asking you to heal me. Just empower me to stay lame. Feed my condition. Yeah, don't fix my condition, feed my condition. I don't really want my church to grow 'cause then I have to be organized. And I have to be responsible. I like it, like it here.

So Peter and John now have a decision to make. Either the lameness on the temple and the lameness on the man has gotten on them, where their message doesn't work. Because they use the right name, and they said the right thing, and nothing happened. Read it. They said, "In the name of Jesus Christ of Nazareth rise up and walk", and nothing happened. If they'd of left it right there, they might as well to go on back home. 'Cause that meant that the name didn't work. It had worked before. Jesus had used the power and that worked before. And the devil will try to make you lose confidence in your ministry because you said all the right things and nothing happened.

That's why I like that Peter was there. Because Peter was radical. Old water-walkin' Peter. Old cussin' Peter. Old ear-cuttin' Peter. Peter said that devil is a lie. You gettin' up out of here today. And the Bible said, "He took him by the hand. And he yanked him". Good God Almighty. You gotta have somebody in your life that doesn't enable your dysfunction, that won't play your game with you, that'll take you by the hand and say, "Wait a minute, the devil is a lie". Get ahold to somebody and just yank 'em a little bit. I command you to come out of this. I will not leave you like I found you. You are not gonna lay here and feel sorry for yourself another day. Good God Almighty.

Everybody stand. Isn't it funny how you can receive strength everywhere, but if you don't receive strength in the place where you are weak, you can join The Potter's House, you can go through save to serve, you can get a volunteer badge, you can be on the PMT Board, the AMY Board, and the JQY. You can hear sermon after sermon after sermon after sermon, and shout and dance and break your heels dancing in the Holy Ghost. But if that strength doesn't get down to whatever is broken, the Bible is so detailed it doesn't want you to think that the miracle just happened. It says the miracle happened because the worst part of him received strength. Wasn't nothin' broke but his ankles. His whole body was shut down over a little thing. Let me tell you something right now.

Watch this. Let me tell you how ripe you are. The enemy will try right now to distract you. Let me tell you how close you are. The enemy will do anything to distract you right now because this is your yank moment. And if you receive this word in the place of your brokenness, a change, a wonderful change. Let me tell ya, let me tell ya something, when this man received strength, he started jumping and dancing and praising God because he never really liked being this way. No way. He just didn't know he had no option. And all of a sudden, his ankles received strength and he started walking and leaping and praising God, all at the same time. And the people in the temple said, "Is not this the man"? And that's what God wants to make a testimony out of your life. He wants people to say, "Isn't that that guy? Isn't that that girl"?