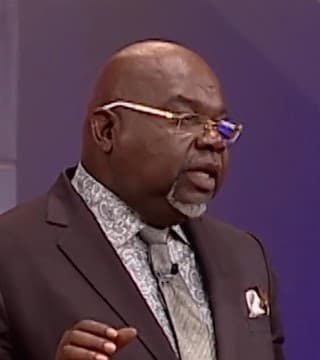 Calaphas spoke well when he said, "What is it that we get rid of this one man? What is one man dying against the whole world"? Little did he know that's exactly what Jesus was going to do. He has set his face to go to Jerusalem. What amazes me as he leaves Bethany and Bethphage is that he says to two of his disciples, he said, "Go into the nearest city. And when you get in the city, there you will find", look at your prophet. A prophet, if you will, prophet priest and king. A prophet. Now he's operating in his prophetic gift. He says, "When you get in the town, you will find a colt tied up". Oh, I got happy when I read it. I'm happy because with all of this pressure and all of this weight and all of this betrayal and all of this confusion, his gift still operates. I'm happy because in the middle of all of this anguish and prayer and chaos and confusion, that he still knows where the colt is.

See, I got happy about that share because I believe that if God can know where the colt is, he knows. And sometimes I can deal with the hell of life if I can just remind myself that God knows where I am. If he don't fix it, I'm just happy to know that he don't. And so, he says, Go get the colt. You must understand there's about to be some drama. Not in the colloquialistic ideas of drama. But drama in its purest definition is a reenactment of reality. When I looked it up, the definition, one of the words that they used to explain what drama was, was "pantomime".

And when I thought about pantomime, I thought about Beyonce. My mind is weird like that. But you will remember during the inauguration there was a great disturbance because she pantomimed the music. She had sung it and recorded it. And then stood and acted as, and you see that's what drama is. It is an enactment of life. It is in fact the imitation. And in order to be an imitation there has to be a reality. And I suggest to you that Jesus has sent for the colt. 'Cause there's about to be a play. And the play is a... when he will come riding in as the Lord of lords and the King of kings. And the real coronation will begin. This is not that they... And he says, Go get the colt. "I'm gonna act out". What will ultimately happen.

Oh, I feel like preaching. That's not good. It doesn't matter. I don't have to have the royal diadem nor the host of heaven. No, don't bother the 24 elders. Don't open up the clouds. Don't split the Mount of Olives. I'll walk across this time. But let's act it out so you can see on Earth what has been done. I told you to pray, "Thy kingdom come. Thy will be done on earth, as it is in heaven". Let's put this drama together. And in order to put the drama together, I've got to have some props. And there is a cult that was birthed into the world for such a time as this. Nobody has ever sat on him. He has never found his purpose. He has lived his life oblivious to the fact that I have a plan for him that will cancel out all the ambiguity of his history. Will culminate in one pool of my divinity. Call him. And if anybody tries to stop you, tell them the Lord.

You know when God gets ready to pull you out of something, no devil in hell can stop you from coming out. When God draws you, who can be hind, not a witch, not a warlock, not a demon from hell. Not a habit, not a sin, not a weakness. When God draws you. I thought about, I was teaching a class to ministers about spinnin' a text. When you spinnin' a text, you look at it from different angles. And I looked at it from the angle of the colt. How many days, weeks, months, years had passed by watching other people be used, feeling intimidated and insecure and wrestling with low self esteem? I must not be worth anything. Every time they need something done, they pick somebody else. I've been overlooked and looked over. And I'm tied up. And I got issues. And I'm standing here.

And all of a sudden, here comes two disciples down the road saying, "God has not forgotten you". I don't know who I'm talking to this morning, but when I look at it from the angle of the colt, I realize how long the colt lived without a sense of purpose, without a sense of significance, without a moment of validation. He's just going through the motions. Why am I eating? Why am I drinking? Nobody uses me anyway. Why am I here? Nobody has ever sat on me. Sat on my brothers and my sisters. Never did touch what's wrong with me. That nobody ever chooses me. The colt doesn't know that his isolation is really a reservation.

I'm talkin' to somebody. I don't even know who it is. You have to go through a period of ambiguity and uncertainty and isolation to realize that it was all a set up for a divine reservation. I came to tell somebody you haven't been overlooked. You're reserved like a table in a restaurant with a sign on it. Can't nobody sit here because it has a reservation. Oh, y'all don't hear what I'm saying to you. Tell somebody. Tell 'em, "I'm reserved. Don't touch this. Don't fool with this. Don't bother this. I'm on reserve". When the time is right and the stage is set, then God will call me like an actor waiting behind a curtain for a cue. The colt waits in ambiguity and steps with one hoof from ambiguity into notoriety, from overlooked to looked upon. You're just one step away.

And the disciples went down there and Jesus seemingly knows that whenever he gets ready to claim what is his, there will always be opposition. That's a sermon all by itself. And he says, "Go down there. I know where it is". All that pressure on him. He knew where he was and says, Go get him. And if any man tries to stop you, tell 'em up under whose authority. Tell 'em who's running this drama. Tell 'em who's in charge of this drama. Tell 'em who's producing this plate. Tell 'em the Lord has has need, that canceled out everything you had planned for him. I want it. Come here. Now, there is a problem. There is a theological problem I have to deal with.

The Book of Exodus says that whenever a colt or ass is born and never a man has sat on him, that in order to take him, you have to give a lamb to redeem them from the owner. And I thought, my God, this is a conversation between a colt and a lamb. So I thought I would look into it a little bit because, you know, one theologian says that even though Luke does not mention it, he suggests that the disciples must have carried a lamb to redeem the colt. But where the Bible is silent, I think we should be silent. And I could not find where Jesus sent a lamb with the disciples. And then I realized he didn't send a lamb because he is the lamb. And I realize the only way you can be redeemed is by the price of a lamb.

Now, now, now. Can I work on this just a minute or two? They could not steal him. They had to redeem him. So he said, "Tell 'em the Lord has need of him". Because Jesus knew that he wasn't just Lord, he was also lamb. That's another sermon all by itself. But I don't have time to talk about that. So they redeemed him, switched his ownership. As they was gettin' him, colt looked at his old owner, "So you don't own me no more? I've been redeemed. Change my papers". What used to own me. You need to change your papers because what used to own you, what used to tell you when to eat and when to drink and when to lay down and when to go into the store, it don't own you. It doesn't owe you anymore.

So number one, he had to be redeemed. Redeemed. Redeemed. Purchased. Transaction. Agreement. Worked out. So that he could switch papers. But then there was this other problem. He had to be released because he wasn't just owned by someone else, he was tied up. Now, he cannot release you until he redeems you. But if he redeems you, he's got the right to release you. Every redeemed person in this room oughta be shoutin.' Because first thing we got to acknowledge is that you can be redeemed and not be released. To further validate this fact, look at Lazarus, resurrected from the dead but still bound by the grave clothes. Jesus used the same term. He said, "I'm gonna raise him, but y'all got to loose him". And I believe he said, "Loose the colt. Let 'em go". "You can't tie me no more, 'cause you don't me no more".

Oh, I'm, giving you some ammunition you can use against that thing you fightin' with right now. I've been redeemed. Now, I got to be released. Please release me. Let me go. You don't own me anymore. Oh, please release me really. Let me go. You don't own me anymore. Somebody goin' home singing that tonight. My neck. Turn my neck loose. Whatever you were using that kept me in the same spot. See, when a colt is tied, it can only move so far before the rope pulls it back to the post. All my life, I've been camping around in the same circumstance. And every time I tried to get away, you used the same old stuff to pull me back to the post again. But I got out the bed this morning to kiss the post goodbye because the Lord has demanded a release.

Sit down. Sit down. Wait, wait, wait, wait, wait, wait, wait. Sit down. Sit down, before you, before you run completely away from the barn. He never releases you to do your own thing. He redeemed him. He released him. But he had a plan to rule over him. So he said, "Bring him here to me. I released you from this so I could rule over you on this". And, they set their coats on 'em, and Jesus sat on him and said, "Let the drama begin". His entourage gathered with his minions and they beheld the wonder of his glory. The only begotten of the Father, full of grace and truth. It was so glorious, that without anybody commanding it, they laid their coats in the way. And some reached and got palm-branches and threw it out before him. And let the drama begin.