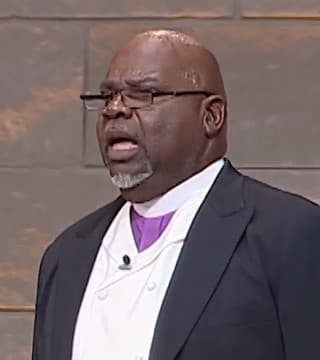 So, what you must understand, bear with me if you will, is that Paul resists the temptation to get into a battle of wits with Apollos and his followers. He "concludes, I planted, Apollos watered, God gave the increase". It says, it doesn't matter who plants. It doesn't matter who waters. God just gives the increase. He refused to allow them to entice him into a battle where there was no spoils. You know, people will try to draw you into a battle where there is no spoils. They'll play on your ego, and your pride, and your emotions, to try to get you to get involved into something that you ought to stay away from. You have to be mature to walk away from a fight sometimes.

And then, the third thing Paul recognizes is that the enemy, the enemy, the saboteur of our souls is always working behind the scenes. He has a strategy, as it were, to lead to your demise, that he has been studying you, that he has been watching you. The text of my predecessor used that Satan has desired to have you, that he might sift you as wheat. That word desire means, I've been lusting after, I've been longing after, I've been watching your habits and your mannerisms so that I could develop a way of wooing you.

Touch your neighbor and say, "I must be real close". I must be real close. Why do you say that you're real close? 'Cause it's getting harder now. Gettin' tougher now. Yeah, I shed more tears now, have to push a little harder than I used to have to push. Things that used to be easy don't come so easy right now, 'cause I'm getting closer to my breakthrough, and the closer you are to your breakthrough, he starts dispatching specialized demons that have been strategically released for such a time as this to detonate, to explode like dynamite, to bring you down, down, down, down to your knees.

You're shouting 'cause you're successful. I'm shouting because I'm a survivor. Bump success. I'm, just glad that I'm still here. The Bible said, "A thousand may fall at your right side, 10.000 goin' down on your left side, but it shall not come nigh thee". Have you ever wondered how you saw so many people go down, people you knew, and people you Loved, people you went to school with, and people you went to work with, and yet, some kind of way, you bounced back. You just bounced back. You're just the comeback kid. When everybody thought you wasn't gonna make it, you just made it any way. You just came out of it. Sometimes you don't even know yourself how you came out. You went to bed thinkin' you wasn't going to come out, weeping all night long, woke up in the morning with a peace that you couldn't even explain it. Am I preaching to anybody?

And then he stops and says, "If the princes of this world would have known what they were doing, they would not have crucified the Lord". He said, "I'm going to draw strength in my suffering, from Christ's suffering". Christ did not land on the cross accidentally. There were manipulators, orchestrators who were committed to his destruction. And some of them, some of them, some of them, you could see them in their Roman garbs, and their shining swords, and their dominion over Jerusalem was proof positive that the Romans did not love the Jews. It was quite clear they had besieged their country and taken their land and controlled their worship and taken over the temple. There was no mistaking the fact that the Romans had stock in his destruction.

When Jesus preached in the deserts, thousands flocked out into the deserts to hear him preach, and that's a lot of power. He wasn't just some fly by night, Johnny come lately, uprise superstar, overnight wonder, midnight blunder. No. He was drawing a crowd. He was getting influence. He had some backing and he had some support. They had to pay that some attention. Ten years prior to Christ's crucifixion, they had had an uprising amongst the Jews, and then had to bring in special military to get control. So, they are a little bit nervous. We understand they were. They were a little bit nervous about him, and you can understand how somebody from Rome would attack this Jewish boy.

When he did that spectacular event down there with Mary and Martha, when he missed the death of Lazarus, and showed up after the funeral, and walked up to the grave site, and rolled the stone away, and said, "Lazarus come forth". That's when Caiaphas said, "Oh, no, he's gone too far". They got indisputable evidence. Got to get him out of the way. So Jesus not only had to deal with the political ramifications of Rome, he had to deal with the theological interrogations of Caiaphas. But that was not the worst of it. It's one thing to have a political problem. It's another thing to be attacked theologically, but when somebody in your own ranks touch in seasons, the sword we could withstand, the Scriptures we could debate, but oh that kiss, that kiss that can only come from somebody who is close enough to walk up to you and you don't push 'em back, because they're one of your inner inner circle.

I want to talk to somebody who's backed in a corner, and shoved to the wall, and before you can deal with Caiaphas, here comes the Roman soldiers, and before you can find some recluse from the Roman soldiers, here comes somebody you love kissing you with the kiss of death, and your heart is broken, and your mind is overwhelmed, and you don't know what to think, and you don't know who to believe in, you don't know where to go anymore. I want to remind you that if the princes of this world would have known what they were doing, they would not have crucified the Lord.