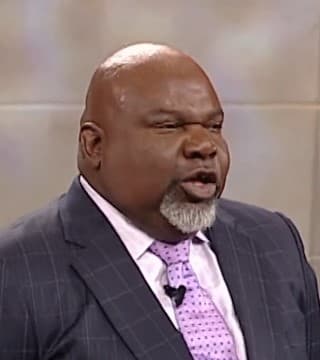 I saw a lady the other day, she's a physical therapist and I had not seen her in quite awhile. And she was, she was big. Noticeably, excessively, exceedingly, abundantly, above all that I could ask or think. She was fat. She was huge. She was overflowing. Looked like bread dough coming over a muffin pan. Exceedingly, abundantly above all that we could ask or think. She was blessed. I act like I didn't see it. I said hi. I thought "Whew, what happened to you"? I didn't know then that she was pregnant. She was fat for a reason. She was growing something inside of herself.

See when you begin to understand that God is fat for a reason. I'm tryin' to make you understand that your God is pregnant. He's not fat without a cause. He's not excessive without purpose. He's not wealthy without reason. He's not power without precision. He's got something inside of him and out of the pregnancy of his own divinity he begins to speak things into existence. Can I preach this this morning? See, when you get around a creative person everything that they have created is an expression of who they are. For creativity does not come from external sources. It comes from internal.

How in the world can I be a mirror and a blessed God stand in front of me and me not be blessed back? If he was blessed coming toward me and I'm created in his image then I cannot reflect defeat, failure, and fear lest I be a lie to God. Ye shall know the truth and the truth shall make you free. The closer he gets to me the more blessed I am. Oh, I feel something stirring in this place. I feel something about to release in this place. If I was a demon I'd get out of here. If I were the devil I would run out of the room. If I was fear I would get out of the building. If I was lack I would run for cover cause I feel a Holy Ghost downpour about to saturate this place. Somebody take 30 seconds and give God a blessed pray, I mean a fat praise.

You're going back to school. Don't be scared of going back to school. You're fat. You can handle it. You got concepts. You've got ideas. You got creativity. It's in you. Slap somebody, say abundance is in me. Somebody holler more. Shout more. Shout more. My God, I feel the anointing of more coming in this place, pressed down, shaken together, running over. Somebody give God a praise. Praise him in the balcony. Praise him on the floor. Praise him on the internet. Praise man in the choir stand. Let everything... Here I come, all kinda stuff I ain't use yet. All kinda stuff I ain't birthed yet. All kind of things that haven't been released yet.

Anyway, let me stop playing around. I do want to tell you haven't thought your highest thought yet. You haven't climbed your highest mountain yet. You haven't done your biggest business deal yet. You haven't taken in your greatest harvest yet. If you had the devil wouldn't be fighting you. Why would he fight you if you were already finished? He's fighting you 'cause there's something else down inside of you. Lord, who am I preaching to? I don't know. Holler, my best days are ahead of me. Oh, you don't sound like you mean it. My best days are ahead of me.

Nothing that you can mess up would make, watch this. "According he has blessed us with all spiritual blessing things that pertain unto life and godliness in Christ Jesus. According as he hath chosen us in him before the foundations of the world that we should be holy and without blame before him in love wherein ye are accepted". I was reading an article about a mother who is pregnant with conjoined twins and they asked her to terminate the pregnancy. But she won't terminate the pregnancy.

She says, "I'm going to have the babies". She said, "Because I already love the babies. I haven't touched them. I haven't held them but I already love 'em. They're already mine". She said, "Whatever's wrong with them", y'all can't handle this, "Whatever's wrong with them I still want them. I'll take 'em if they're joined together. I'd taken together if the heads are stuck. They are still mine". Throw your chest out say I belong to God. Crazy as I am. Silly as I am. Stupid mistakes I make. I still... And just because you don't like me you can't get God to abort me. Say whatever you want to say but greater is he. Oh, I feel the Holy Ghost. Oh, oh, oh. Oh, somebody give God a praise.