TD Jakes - Draw It Out Of Me 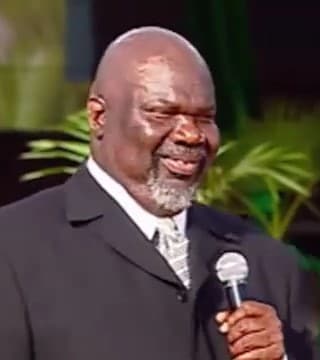 There was nothing wrong with the people he was exposed to. They were good people. They were praying people because God said that they'd been praying for a deliverer. They were wonderful people. But he had learned all he could learn being exposed to the usual. And so God took him out of his environment and out of his element and brought him to a place at the brook where the Pharaoh's daughter could see him. Now, you got a Hebrew baby exposed to Pharaoh's daughter, an Egyptian woman. Are you following me today?

When she reached into the water and drew him out... somebody say, "Draw It Out of Me". Those Egyptian hands pulled that Hebrew baby up out of the water of what it was used to and exposed it to a whole different dimension. When we reach over top of our cultural barriers and are exposed to people who do things differently from us, it is because God is getting ready to take you beyond your normal. Are you ready for this? Look at somebody and say, "No more business as usual. I've been exposed to something else".

God took this slave baby, this Hebrew boy, out of the water and planted him in the palace. All of a sudden, he had nurses and nannies and people bathing him and sending him to school and God was exposing him to things that he couldn't afford, that he didn't expect, but God sent the provision for the vision. Is there anybody in here with a great vision? If you got great vision, expect great provision. The greater the vision, the greater the provision. And God sent him into Pharaoh's house, and Pharaoh paid the bill for Moses to be exposed.

Watch this, Moses is still a Hebrew now. He hadn't forgotten who he is or where he came from. But he is exposed to an Egyptian mentality because God knew that Moses could not fulfill his destiny with a slave mentality. For what God was getting ready to do in Moses's life, Moses couldn't be wandering around talking about, "Yes sir, boss. I'll be there in a minute, so, yes sir. Yes, sir, you need anything else, boss? I take care of your shoes in a minute, boss". God needed somebody with some boldness who could stand up tall with their head up and their back straight and say, "God said, 'Let my people go'".

Somebody holler, "Expose me". That old eagle would have still been plucking with the chickens if he hadn't have looked up one day and said, "Ooh, there's another way to do this. Ooh, my God, I didn't know you could get up that high. Ooh, look at that. Wonder if I spreaded my wings like he spreaded his wings and I got to running real fast, I wonder if I might be able to get up enough wind to fly". God will expose you to something and when you see it, it ignites a passion down inside of you.

Let me go ahead. When Moses first attempted to discover his destiny, he saw an Egyptian and a Hebrew fighting, and he went out and got in the fight and killed a man and had to go away. The importance of failure. You can't fly if you're afraid to fail. Moses was on the back side of the desert for 40 years. Thought his life was over. And as he was walking around in his failure... somebody in here, you've been walking around in your failure because you live amongst people who will count you out because you made a mistake. They'll write you off because you made a mistake. They'll always refer back to something you did ten years ago. They think you'll never be anything 'cause you made a mistake, often a mistake that they made, but they covered theirs up and you got caught.

Oh, I'm gonna stir up some stuff while I'm here today. They will preach about people who fail, shout about Moses the murderer, talk about Jeremiah the ex-jailbird. They'll give all kinds of messages about Ruth who was an idolatress and a Moabitess. They've got all kind of grace for Paul, they've got grace for everybody who failed in the Bible but no grace for people who fail in the church. I know you don't like it, but I'm not scared. The same grace that picked up Moses will pick you up. He is the God of a second chance.

Now, I know your church friends are here, and you can't let anybody know that you needed a second chance, but those of you that don't care what anybody thinks about you, get up and thank God for another chance. Would you walk over to somebody and shake 'em by the hand and tell 'em, "I thank God he gave me another chance". God appeared unto Moses in a burning bush and said, "Moses, I know you messed up, but I'm about to give you another chance". I came all the way from Dallas, Texas, to prophesy to somebody who messed up. God is about to give you another chance. The people think it's over for you, but they lied. God is gonna raise you back up again. Give God praise.

Moses knew that he was about to be ejected out of the womb of his past life. He was about to be drawn out. Somebody say, "Draw it out of me". Be renewed while you wait. Renewed while you wait. Let me tell you what God did. God said, "Moses, I'm getting ready to use you, man, like you never been used before". "Well, what do you want me to do, Lord"? He said, "See that rod in your hand? Throw it down". He threw it down, it turned into a snake. He said, "Pick it back up again". He grabbed the snake by the tail, turned to a stick again. Said, "Get that water over there". Said, "Yes, sir". He poured out the water. It turned to blood. He said, "Take your hand and stick it in your bosom". Pulled it out, it was white with leprosy. He said, "Stick it back in again". It was healed.

Wasn't nobody out there with Moses but God. But God was renewing Moses's strength because what Moses had done in private, God was about to use him to do. I wish I had some preachers in here. If I had some preachers in here, they'd shout over what I'm trying to say. See, some of you, God's been using you in a mighty way behind closed doors. But God's about to bring you right down to the Pharaoh's house so that when the witches try to show off, you'll say, "Wait a minute, check this out. Check this out". God's had you practicing your miracles 'cause he's about to use you like you've never been used before. Shout, "Yeah".

When Moses got down to Pharaoh's house, he was ready because as Isaiah said, "They that wait upon the Lord shall renew their strength". Wait a minute, I wanna check something. Everybody who's been through some tests and some trials and some failures, but you feel your strength coming back, just wave at me. Wave it real high. I feel my strength coming back. I feel my faith coming back. I've seen my miracles coming back, hallelujah. God took Moses from the background to the forefront in a flash. If the men and women of God who have had a dream inside of them, some of you are pastors, but you've been afraid to release your full dream 'cause what you see in your spirit is not like what the other pastors see in their spirit. You don't wanna be criticized, but you're gonna have to stop worrying about what other people think and say, "See ya".

Some of you are in leadership and in government and your style of leadership doesn't fit in with the other people's style of leadership, but you're gonna have to go ahead and spread your wings and say... Because the greatness that God put down inside of you is about to come forth. When my wife was having our last child, the doctor told her when Dexter was due. We had the date marked on the calendar, but about three weeks before the date came, she told me, "Honey"? I was sleeping, I said, "Yeah"? She said, "Babe". She called me "Babe". She said, "Babe"? I said, "Yes, Serita"? "Get up, Honey". I said, "Why"? She said, "It's time".

Look at somebody and say, "It's time". I said, "It can't be time. This isn't the date marked on the calendar". I said, "This is three weeks from the date". She say, "Baby, I don't care what the doctor said. I'm the one that's got this baby down inside of me, and the one that's got the baby inside of them is the one that knows when it's time". If you've got something down inside of you, you ought to holler at somebody and say, "It's time". Somebody else had another date on the calendar for you to come into greatness, but guess what? They were wrong. God's gonna do a early work in your life. It is your time.

I was in one neighborhood where we've been ministering and bringing food, right in Kenya and they said, "Bishop, when you left, the people said it started raining". Y'all know what I'm talking about? And they said it was strange that out of nowhere rain started coming. And then I helicoptered out into a rural area. We dedicated a well out there. And one of my guys with me, he said, "Now don't let it rain out here 'cause it was real dry". And we got in the helicopter and we was flying back and as we was flying back, rain broke out on two sides of Nairobi.

And so I asked one of the Kenyan brothers. He said, "Over here, we believe that the coming of rain is a sign of a blessing". And I said, "Lord, I don't understand it 'cause when you dig a well the water comes up out of the ground". I said, "But when it starts raining, the water comes down out of the heavens". I said, "What does this mean"? He said, "When you get there Sunday, tell my people I'm gonna have blessings coming at you from every direction. It's gonna come up, it's gonna come down, it's gonna come over, and all you gotta do... 'See ya. It's my time for blessings. It's my time.'" Shout out here.