TD Jakes - The Power To Change The World 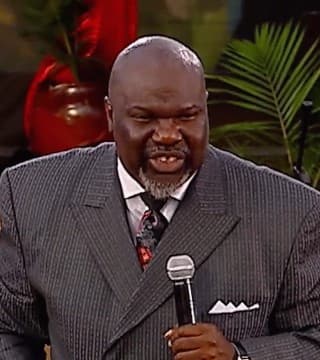 Hey, everybody. Greetings in the name of Jesus Christ our king. We've got a Word for you today that's going to bless your life. More importantly, we have an experience that touched mine, and I believe it will touch yours, too. The message is "The Power to Change Your World", and I want you to understand you don't have to just sit back and hope that things get better. The Holy Ghost has come to give you power, but what will you do with that power you've been given? It is up to us to change the world. Take a look.

The Book of Genesis says, "In the beginning, God created the heavens and the earth. And the earth was without form, and void". In other words, it was chaotic. It was a muddy mess. And in spite of the mess, the Spirit of God moved in the mess. We have a God who moves in spite of mess. You would think that everything had to be in order for God to move, that everything had to be just so-so for God to move. But God can step into a chaotic, confused, muddy situation and still move by his Spirit. Somebody holler, "Move".

You need to know that because sometimes your life will look like a mess. And the circumstances will be all muddy and you can't see how you're going to make it, but the Lord our God will move in a messy situation. He moved upon the face of the deep. And whenever you see God moving, be sure that he's going to speak. Oh, somebody say, "Speak, Lord". He doesn't just come in a praise service so you can have a good feeling. The praise service is just God moving so that he can speak. I came to bring you a Word today. God is getting ready to turn your life completely around. He's getting ready to do something so fresh and so new in your life that you're not going to be able to praise him with your old praise. You're going to have to sing unto the Lord a new song for he has done marvelous things. His right hand and his holy arm have gotten him the victory.

Throw your hands up and say, "I'm ready, Lord". Whenever God moves, he moves in a situation to bring order where there was confusion. He brings structure where there was chaos. He separates the firmaments that were above the waters from the firmaments that were beneath the waters. He separates the lesser lights from the greater lights, and he names as he separates. Because if you are really anointed, real anointing will bring order in your life. Real anointing will bring structure in your life. Get away from people who tell you they're anointed, but they have a lot of confusion and chaos in their lives. Real power brings order, structure, and discipline into your life.

You can't say you walk with God and don't speak to me. If you walk with God, he's going to tell you how to love me. Shout, "Hallelujah". So when God begins to move, he moves in a sovereign and a powerful way. He moves in an auspicious way. The Bible says in the Book of Acts, "The former treatise have I made, O Theophilus, of all that Jesus began both to do and to teach". Notice that it says he began to do it. It didn't say that he finished it. Because it is the plan of God that Jesus would start something that you and I would finish like a marathon race.

A runner runs with a baton knowing when he starts it is not for him to finish. He runs a certain distance and passes the baton to the next runner who is moving into position so that when the baton passes him he's already got the rhythm of the runner to keep pace with what God is going... I'm telling you, Kenya, God's getting ready to hand you the baton and you better be getting into position so that you can lay a hold. Glory to God. Shout, "Hallelujah". My God, I meant to appreciate Pastor Moses Sakuta. Give God a praise for him. I'm sorry, brother. He got to shouting, and I got to shouting, and we forgot. God is moving. And the people who are going to catch the baton are the people who are in position. When I came to preaching years ago, get ready, get ready, get ready, it meant that it's time for you to get in position. You don't wait till you get the baton to start running, you start running before he hands it to you so that you're ready to step. Touch somebody and say, "I'm already running".

I'm telling you right now, God's got some folks who's been waiting in the wings. They've been getting ready. They've been in the background practicing. God's getting ready to move you from the background to the forefront. Oh, get ready. Get ready. Get ready. Your time. Shout, "Yes". Yes. "The former treatise have I made, O Theophilus, of all that Jesus began both to do and to teach". It is God's will for you to understand your course. Paul said, "I have kept the faith. I have finished my course". I don't have to finish your course. I don't have to finish his course. I don't have to finish her course. I have to finish my course. God's looking for originals, not copycats. I said God's looking for originals, not copycats. You want to be an original. I'd rather be an original than a cheap copy. Do your own thing. Run your own course. Finish your course. Hallelujah.

Oh, Kenya, your God is a speaking God. He's a speaking God. That's why he uses the foolishness of preaching to turn the world around, because preaching gives you a clue about God. Your God is a speaking God. "In the beginning was the Word, and the Word was with God, and the Word was God. All things were made by him, and without him was not anything made that was made. In him was life, and the life was the light of men, and the light shineth in darkness and the darkness comprehended it not. Now, there was a man who was sent from God. His name was John. He was not that light, but he was sent to bear witness of that light, saying, 'There is one coming after me who's mightier than I. I baptize you with water, but he shall baptize you with the Holy Ghost and with fire.' And the one was made flesh".

"Ye shall receive power, after that the Holy Ghost has come upon you; and ye shall be witnesses unto me". And let me tell you what Pentecost was. Pentecost was devout men from every nation coming together in one place. In its roots, it's the ingathering of the harvest. Harvest is coming in. Devout men from every nation gathered for the Feast of Pentecost and suddenly there came a sound from heaven. Now, the last time we had seen this kind of move it was when Nimrod was building the Tower of Babel. And when he raised his fist toward heaven, said, "I will build a tower to heaven", and they would have done it, the Bible said, because the people were one. But the Spirit of the Lord moved and confounded their language, and so all of a sudden people who were related couldn't understand each other, because they were speaking in different languages.

Hear me, Kenya. Fret not thyself over evildoers and how they prosper in their own way. The Bible said they shall soon be cut off. God is going to cut down the wicked, because you're next. The blessing is coming upon you. Don't worry about the evil ones that say they won't move out of the way. God is going to move unrighteousness out of the way. You are next. Make some noise in this house. When the woman with the issue of blood touched the hem of his garment, she received power; power physically that healed her body, power financially 'cause she had spent everything and gone broke, power relationally because according to the Scriptures she was unclean and untouchable. But when she touched the power of God, everything that got away came back to her.

So we got out in the cotton fields and started singing, "Steal away. Steal away. Steal away to Jesus. Ain't got long to stay here". We had no money. We had no government. We had no leadership. We had no nothing. All we had was a praise, but a praise opened up an underground railroad and at night we snuck away through the night and went through the underground railroad and came up free on the other side shouting the victory. And I came to tell you, slavery is over in America and most of the world. It's over, but there is a new slavery. Poverty is the slave master of the 21st century. And wherever it goes unchecked, it still destroys the will of whoever it captures.

I'm out time. I've got to stop there, but I hope you've been blessed by the Kenya experience. My God, he does amazing things. I pray that the Holy Spirit will continue to touch you. If you can't touch the world, touch your world. It begins with the smile you place on your face. May the grace of God and the power of the Holy Spirit overshadow you and keep you going in Jesus' name. Go forth. Amen.