Contact Us
Watch Christian Sermons Online (Sermons Archive) » Bishop T. D. Jakes » TD Jakes - He Is The Great I Am

TD Jakes - He Is The Great I Am 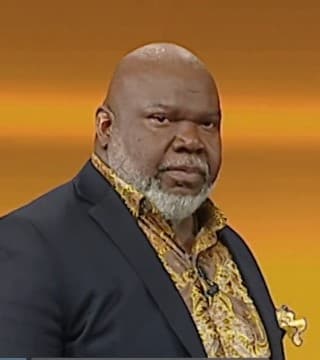 Let's pray, Father, I thank you for the opportunity to share the Word with the people of God. I pray that the Word would be made flesh while it is being preached, and that people would be blessed and strengthened. Give me nimbleness of thought and clarity of mind that I might effectively espouse the Word of God to the people of God. I thank you, Lord, because I know that wolves cannot eat sheep food, so somebody will starve this morning, so that somebody might be fed. Feed the flock of God of which the Holy Ghost has made me overseer, and I thank you for what you're about to do, in Jesus' name, somebody shout amen.

Jesus goes back down to the Jordan because he has just been fighting with the Pharisees who have called him a devil. But he knew, "I am", not what you say I am, not what the circumstances in my life look like I am, not who my friends are, not who my enemies are, I am who God says I am. So, I picked out three things that I really wanna focus on, and I want to really express them. The first one, he says, "I and my Father are one", so he says, "I am one with the Father". "I am one with the Father".

This is what they got ready to stone him for, because he was basically saying I am God. And they got ready to stone him, and Jesus said, "For which one of my miracles or the good works that I do are you going to stone me"? They said, "We're not stoning you for the good works you did, we're stoning you for the blasphemy of saying that you are God". And Jesus quoted a Scripture and said, "Did not the Word refer to those who hear the Word as being gods"? Gods, small g, but still gods. Over your choices, your decisions, right now, you are where you are because of the choices you've made.

When I started writing about entrepreneurship, I thought I was just writing to people who have a business with an address, or a location, or a vision, and suddenly, I began to recognize that entrepreneurship is not about a business alone, it's really about a mindset where you take responsibility. It's where you take ownership and where you become the CEO over you, and stop allowing other people to control your worth, your destiny, your presence, your purpose, and your value. I am through allowing your presence in the building to affect my attitude, where I can't do what I was created to do because you came in the room.

I am taking back control over my environment. I will not be angry because you came in the door, that's too much power to give to somebody I don't trust. So, I am the CEO of me. Y'all don't hear what I'm saying. That was better than you shouted, maybe it'll get you when you get home. Jesus says, "I and my Father are one". I am not centered by what you say. I am not campaigning to get you to change your mind. I'm not gonna spend the rest of my life trying to prove to you that I am not a devil.

See, some of you cannot be happy today because your goal in life is to change somebody's mind who's not even thinking about you. You didn't get the car 'cause you liked the car, you got the car to drive past your ex-husbands house, so he could see the car, and he's not even at home. You're busy trying to respond to somebody that really doesn't matter. You don't have to be one with people, you ought to be one...

Jesus said, "I am one with the Father", and he means more than I am one in the sense that we want to be one with God, he means in his essence, in his deity, in his presence. The Bible will later say that he thought it not robbery to be equal with God and made of himself no reputation. Later, Jesus will say, "If you have seen me, you have seen the Father, for I am in the Father, and the Father is in me". You say you worship God, but then when God walks in the midst of you, you reject him. He said if you really love the Father, you would have to love me, because the Father dwelleth in me. And when the one God who is above you decided to come to you, he came in the person of Jesus Christ.

If you want to best understand the relationship between Christ and God, next time you have a glass of water, put some ice in it. And figure out which one of them is H2O. You could look at the glass and say the ice is in the water, but if you look at it long enough, you'd have to say but the water in the water. If you don't like water, you don't like ice. And if you don't understand that, then put it on the stove and boil it, and when it turns to steam... How can one element be three things at the same time and still be one? It happens in your kitchen every day! God shows up in your kitchen every morning between your ice machine, your water spigot, and your tea pot. Identifiable in three distinct, unique, definable entities, but to the chemist, it's all H2O. Jesus said, "I am one with the Father, pay this flesh no mind. It's just what the Father is housed in". Emmanuel. God with us.

"I am one with the Father", that's number one. Number two, he says, "I am the Good Shepherd". He said, "I am the Good Shepherd", and the majesty of the text draws us to the second sentence, for he goes on to say that the "The good shepherd lays down his life for the sheep". Which takes us to the cross, and the power of the cross, and how he proves the authenticity of the statement when he goes to the cross and lays down his life for the sheep, instead of substitution, takes the place of, takes a death that was not his, so I can have a life that was not mine. "I am the good shepherd".

But it amazes me, because he goes on down. What Jesus is preoccupied with is not so much talking about laying down his life but giving a distinction between the hireling and the owner. He says, "When the wolf comes, the hireling flees, because they are not his sheep". In the NIV, he said, "I own the sheep. I own the sheep", he's talking about me and you. He said I own you, you are mine. The people I send to take care of you, if the wolf comes, they may run, but he says I am the shepherd, the good shepherd, I own the sheep.

My sheep, you're mine. Everything about you, everything you got, everything you're gonna be, mine. I own the grass you eat, I own the water in the brook you drink from, I own the wool on your back. I own you, you are mine, and he says I'll prove that you are mine. If you are mine, you know my voice, and a stranger you will not follow. This teaches me not to try to shepherd wolfs, because the proof of his ownership is in my reaction to his Word. If I'm preaching now and you can't hear it, it's 'cause it ain't for you. If I preach this word and you can't get it, it's 'cause he ain't talking to you. But I don't care if you just came from a strip club, if I start preaching the Word, there's something down in your belly that will recognize his voice.

He said, "My sheep", oh, I feel the Holy Ghost, "know my voice. A stranger they will not follow. I am the good shepherd". And this is what I want you to get about this. He said, "Everybody else may run when the wolf is after you", he said, "but I got an investment in you. I got an investment in you. I bought you. I will not leave you. I will not forsake you. I will fight your wolves off. I will deal with your devils. I will solve your problems. I will pull you out of this storm, because I am"... Oh, God, I'm feeling right Pentecostal today, y'all. It says, "I am the good shepherd".
Let me tell you what he said about his sheep. He said, "My sheep shall not perish". In fact, it says, "Not never", it's a double negative. Said, "Ain't no way you gonna go down, 'cause you mine". And he says, "You shall not never perish, because you are my sheep. You are mine. You are mine, and though your feet are dangling on the edge of a cliff, hold on, I'm coming. I got you. I am the Great I Am. I am the mighty God. Though your friends left you, though your job fired you, though your mama forsook you and your husband left you", he said "they all left because they're hirelings, but I am the good shepherd, you belong to me. I got you. There is no wolf that is strong enough to turn me back off of you. In fact, later you'll learn the battle is not yours. You go ahead and get something to eat. The battle, I didn't design you to fight what you are trying to fight".

I got to quit. I didn't design you to fight what you're trying to fight. I created you with little teeth. You don't have to chew your own wolf. If I'd have meant for you to fight your own wolf, I'd have given you big teeth. I gave you little teeth, so you would depend on me. That's what David meant when he said, "Thy rod and thy staff, they comfort me". I couldn't deal with the stuff I gotta deal with on my own, I am not designed to deal with the pressure that's on my life right now, but when I look over and see your rod and your staff, they comfort me.

The staff comforts me, because sometimes I stick my neck into stuff that I have no business in, and your staff has a hook on it, so you can hook me and pull me out. I would have been destroyed, but every time I got in trouble, you hooked me and pulled me out. If there's anybody in here that he hooked you and pulled you out, give him a praise right now.