TD Jakes - Reel It In 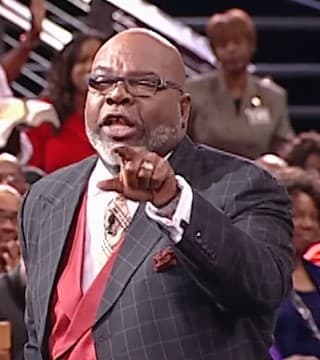 Everything is not for everybody, but I want you to just sink your teeth into this for a minute. Matthew 17:24, down to verse 27. And if I would have used a subject it was gonna be "Reel it In". "Reel it In", okay? "And when they were come to Capernaum, they that received the half shekel came to Peter, and said, Doth not your teacher pay the half shekel"? For clarity, the half shekel was a tithe. It was not a tithe; it was a tax that was placed on the people to take care of the needs of the temple and is equivalent to taxes, okay?

"He saith, Yay". And they're asking Peter, "Does Jesus pay taxes? Does he pay this up charge? 'Cause he's up here teaching, does he give anything"? And Peter said, "Yeah. And when he came into the house", Peter comes into the house where Jesus spake first to him, Jesus saying, "What thinketh thou, Simon? The kings of the earth from whom do they receive toll or tribute, from their sons or from strangers"? And when he said, "From strangers", Jesus said unto him, "Therefore the sons are free".

Simple, so you understand then, Jesus is saying the people who make the rules, their children don't have to pay taxes, because they were monarchies, they were in authority, they had control. And he said, "In the same way that the sons don't have to pay taxes", he said, "is this a rule that I as a Son of my Father would have to pay"? You understand? "I'm the Son of God. Should I have to pay"? And then Peter says, "Well, no, the sons are free". But Jesus says, "But lest we cause them to stumble, go thou to the sea".

Now... He's... And I was gonna preach, "Reel it In". This is the only place in the New Testament that this method of fishing was used. Every other place, they dropped nets and brought into multitudes of fish. But the Lord said, "This is the only time that a fishing rod is used to reel the fish in, because you're not going for bulk". I don't know who this is for. Quickly, you've been praying for resources, you've been praying for resources. You should pray for the fish. Touch somebody and say, "The money's in the fish's mouth". Don't pray for the meal, pray for the widow. The meal's in the widow's house. I'm not gonna start.

So I want you to meditate on that. Woo, I can't hardly read a text without preaching. Just a little bit? The first time I went deep sea fishing I went on a boat and the fishermen on the boat, they do all the work. They really do all the work. They bring the bait and everything, and you bring lunch and stuff like that. And they drop the fishing rod out there. They throw it out there, you know, and you say, "Well, if they do all of that, why do you go"? What I really enjoy is reeling it in. It's the fight, you know what I'm saying? It's the fight. It's the sitting up there and buckling yourself in the seat and pulling.

When I was out there fishing, let me tell you something. Me and that fish got into a fight. My brother said to me, he said, "You're gonna need some help to bring that fish in", 'cause the fish was, I think it was about... I can't lie, I'm in church. But you know it grows over time. But let me say this. It was taller than me. It was taller than me. I'm talking about deep sea fishing, deep sea fishing. You go out there and bring a marlin in, a marlin. You know, it was real. We were fighting so, and he was moving trying to get away from me that the fishing rod had whipped around my arm and cut my skin and my brother said, "Do you need some help"? I said, "Not in this world".

See, sometimes you gotta want it bad enough to shed some blood. See, y'all gonna make me do it. Don't do it. Some people only want it without struggle. But if you serious about reeling it in, you have to put some effort. And let me tell you something else. So what happened was, the fish jumped up in the air. Have you ever seen, like, a marlin or a sailfish jump up in the air? He jumped up in the air looking right at me almost like he was trying to see who was pulling on him. And when he jumped up in the air the first time, I didn't know what to do.

So he jumped up in the air, and that's when he went back down, and he went under again. But the second time when he jumped up in the air, that's when I realized I need to pull him right then. Because you've got a miracle that you have got a sneak peak of. You can see it. But before you can get it, it went back under again. The next time it pops up, I about snapped his neck 'cause, see, when he popped up he was in my element. And whenever you get your blessing... see, I said I wasn't gonna do this, see?

I don't know who this is for. I don't know who needs this. But the next time you see that door open, you get that glimpse, you get that window, don't stand there and be amazed and say, "I'm shocked they even considered me". God said, "Reel it in". Because everything you need and everything you've been praying for, it is in the fish's mouth. Now, I'm gonna show you one more thing, I'm gonna stop. Now Jesus could have created the money. He could have created the money. He could have said, "Well, Peter, here, take this and go pay it". He said, "No, I want to engage you in the process".

I said I wasn't gonna do this. Who am I preaching to? Let me tell you this. Let me tell you this. The Lord has been dealing with me about businesses he was gonna birth in this church, that there were visions that have been laying dormant, hadn't worked before. God said, "I'm gonna revive 'em, I'm gonna rekindle them". And he said, "I'm gonna send an increase through your church". Now, to the visitors who just came this Sunday, I don't preach on this every Sunday so don't judge me by one sermon. I am telling you prophetically that there are dreams and visions that God is going to release in your life, and they're gonna open up resources for you. And I am telling you by the Holy Spirit you've been waiting on somebody to hire you, some of you got to hire yourself.

Look at your neighbor and say, "What's he doing"? Explain it to them. Tell them, "He's reeling it in". They're gonna say you're acting funny. They're gonna say you forgot where you came from. But tell 'em, "I'm not acting funny, and I didn't forget where I came from. I'm just", listen, I'm gonna say this and stop. There is no question about the fish. Jesus said the fish is there. There is no question about the money. He said the money is in the fish's mouth. The only question is do you have the courage to go down there? I can't do this 'cause, see, I'm anointed about this on two levels. Spiritually, I'm anointed because God gave me this word. Naturally, I'm anointed because he's proven it in my life. So if I start preaching about something that is proven in my life, I will go through the roof because I remember what it was like to be in the house with the lights off, and the water off, and the gas off, waiting on God to do something, never understanding that God was waiting on me to do something. I'm gonna rehearse this. There is no question about the money.

Read the text. The money's there. We know where the money is. The money is in the fish's mouth. We cannot get the money 'til we catch the fish, because God has set your provision in the fish's mouth. You've been praying for the provision; you need to pray for the fish. There is a specific fish with a specific provision. You can't drop a net, it's too wide. It's gonna come through one fish. One. Hold your finger up and shout, "One". I never could understand why in Malachi God said, "Bring ye all the tithes and offerings into the storehouse that there might be meat in my house". And he said, "Prove me now herewith if I will not open up to you the windows of heaven". Windows, which is actually translated floodgates, of heaven. Now you open up all of these gates, and then he says, "I will pour you out a blessing".

Tell somebody, "All you need is one". You don't need 10, you don't need 20, you don't need... let me stop, oh, let me, hoo, okay. So, and all this week I want you to read this text. I want you to throw off discouragement, doubt, depression, bitterness, distraction, foolishness, and sin. You are coming into a season where that, that was afar off has come nigh unto you, and if you go down to the sea, the Lord said to me you are going to reel it in. What are you gonna do? What are you gonna do? Say it again. Get up on your feet, I'll stop. I'm gonna reel it in. It's not too far away for me to reel it in. You can't go to the Pacific and fish at the Atlantic. You're closer than you think you are. It's a war between dimensions. It's dimensions. It's dimensions.

That's why I like to fish, it's dimensions. The fish is comfortable in his environment, and I'm comfortable in mine. It is the collision of two worlds. I can breathe in my element, but I can't breathe in his. He can breathe in his element, but he can't breathe in mine. And the reason it's fighting is because it doesn't wanna make the transition into the next dimension. This city is ripe with opportunities, but it doesn't wanna make the transition. Y'all can't handle this. It's not like it's gotta be created. It's there. It's in the other dimension. But God's gonna give you the power. Strengthen your arms, 'cause you getting ready to reel it in. That thing was so big, Drew, it almost pulled me out of my seat. But I fastened my feet down and I said, "I'm not going anywhere 'til I reel it in".

Tell your neighbor, "I'm gonna pull it into my dimension". Your circle is too small to get what you need. You have to reach into the next dimension or your needs won't be met. Peter, I provided it for you, but it's in the next dimension. It is not in your dimension. You have to go into another element to get it. Get out of your comfort zone. Get out of your comfort zone. This is your season to reach, stretch, into the next dimension. You think God hadn't provided it, because you don't see it in your dimension. He provided it, but he is forcing you to go down to the sea. I want you to read this text, and I had to explain it a little bit, but I want you to read this text all this week.