TD Jakes - Listen To The Blood 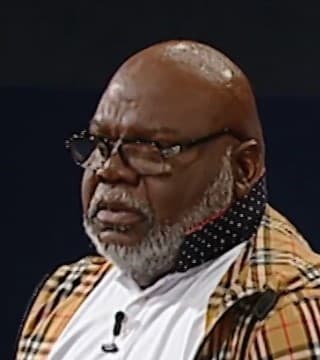 They killed him. They destroyed his bones. They got rid of his young tender flesh, his skin. Nothing was ever found of him. The ground opened up its mouth and received his blood. They killed him and God didn't stop it. They hid his body and God didn't stop it. The ground opened up its mouth to receive the blood of the person who had God's favor and God didn't stop it. And when God came down there, he asked Cain a question. Be careful when God asks you a question. Don't be too quick to put your hands on your hips, let your backbone slip, and tell God what's going on 'cause God already knows what's going on. He is omnipotent, he is omnipresent, and he is omniscient. He is all-knowing. He knows the end from the beginning. So when God walks up on you and says, "What's up"? - start praying.

Where is your brother? Where is your brother is companion to what he asked his father: where art thou? And the curse continues, and the questions are almost the same. Where is thy brother? "Mm-mm. Mm-mm, I plead the fifth. I will not answer up under the grounds that it may incriminate me. Let me see if that works". And then God says: Listen!

Now, listening... can I take my time? Give me just a minute. Listening is about frequency. There are sounds in this room right now that you cannot hear, but they exist. The reason you can't hear them is that your ear canal, your eardrum doesn't operate on a frequency that lends itself to audibility on that level. I could blow a dog whistle in this room and you would never hear the sound, but every dog would start barking. Because I'm blowing on a frequency that you cannot hear doesn't mean that it doesn't exist. To all of my atheist friends, the fact that you cannot hear the gospel does not make the gospel illegitimate. It just means you lack the frequency.

Where are my sisters at? Make some noise. God said, "I hear. I hear it. I can hear". They'll never get away clean. They're cursed with a curse. They'll never be totally free. They're cursed with a curse. There's no need in you being bitter and angry and upset and trying to get even on your own. God said, "No, vengeance is mine", saith the Lord. "I will repay. I'll fix it for you. I hear the sound of injustice".

That's why when you do people wrong, you ought to run to them and say, "I'm sorry. I'm not scared of you, but I'm scared of God. I'm sorry. I'm sorry". 'Cause the Bible said if you judge yourself, you have no need to be judged. All you stubborn people that will never apologize, you're a fool. A wise man will apologize. A wise man will say, "I was wrong. I was foolish. I was silly. I was drunk. I was beside myself. I was childish. I'm sorry. I don't want to spend the rest of my life with a curse".

Can you imagine how Eve felt when they came and told her that Abel was dead? It's not just that she lost her son. She lost her redemption. She was trying to fix it. Her son was dead, and the other one might as well be dead 'cause he's cursed. She didn't just lose one, she lost two. And worst of all, he killed what she had in mind. Have you ever had something killed, what you had in mind? That might be the most painful death of all.

"I needed them to live to fix me. It would have fixed me if it would have turned out the way I thought it would've fix me". It is only when we get over in the Book of Hebrews that we learn that Satan has not triumphed in this story. It is when we get to the Book of Hebrews that we begin to realize that Abel had to die, that Abel had to die because he is a type of Christ; that Abel's death catapults us from the shadow into the reality. It starts with Abel offering up lambs and it ends with Abel being offered up himself, and that, my sister, is the Gospel.