TD Jakes - The Lord Is My Shepherd 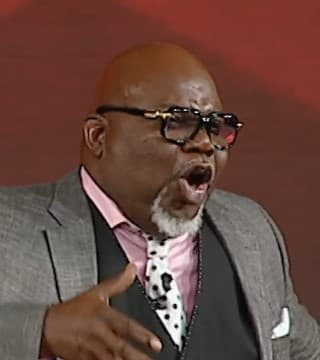 She wanted to fix this mess. "I've gotten a man-child from the Lord", and the Bible says, and the implication is here, and don't let this pass you by. It says: "Adam knew his wife". Put the Scripture back up on the board again from the top. I wanna pull something out of it. "And Adam knew his wife; and she conceived, and bare Cain, and said, I've gotten a man from the Lord". Keep going. "And she again bare", wait a minute. There's no, "And Adam knew his wife again". So it doesn't sound like two pregnancies. It sounds like he pushed again. Touch somebody and say, "Push again". There may be more in you than what you got out of you. Push again. You don't have to always go back to level one. Push again. Touch somebody and say, "Push again".

And she pushed again, and again she bare without Adam having to know her again. She bare a son and some theologians suggest that this could have been the first twins. Interesting because we will see a series of fighting twins. Yeah, Jacob and Esau, and Pharez and Zerah. We will see a perpetuation of the warring twins all the way up to Romans 7 when Paul says, "When I would do good, evil is present with me and that which I would do I do not; that which I would not do, I do. O wretched man that I am, who shall deliver me". In a way, all of us are pregnant with twins that fight all the time, that argue within us, that push and pull and tug. "That which I would not do, I do; that which I do I do not". That's all of this. I find a war going on in my members.

Ride with me, baby, 'cause I got something for you today. So when Cain brings the fruit of the ground to God, God does not have respect for it. He doesn't honor it. He doesn't destroy it; he just doesn't honor it because that's not the way to get access to God. Not by works lest any man should boast. But Abel offered up what Hebrews will say a more excellent sacrifice. Abel offers up blood and God wants us to understand that without the shedding of blood there is no remission of sin.

Now, this is not the first class. I taught your daddy, too. 'Cause when your daddy was running around naked in his sins, I went out and killed an animal. Now, Cain, you're making the mistake of your father because when I found him he was covering himself with the fruit of the ground.

Can I go deeper? Now, the problem with your daddy covering himself with the fruit of the ground is that when your daddy sinned, it separated him from me and that is death. Separation from God is death. And then he separated the vegetation from the soil so that means he covered death with death. Watch this. So while he was sewing the fig leaves, they were dying. How can you be covered by something that's withering? I think you're all ready for me. Are you all ready for me?

So my problem with you, Cain, is that this is not your first lesson. I started your daddy out on this course and yet you have emulated your father's mistakes, his misery and not his ministry. I had to correct him; now I gotta correct you. I had to straighten him out; now I gotta straighten you out. And the reason I'm upset with you is that you should know better. But the sins of the father have passed to the son and now you still think that you can pull something out and make something for yourself and offer it up to me. This is not acceptable.

I told your daddy, "Without the shedding of blood, there is no remission of sin". I went out and killed his first sacrifice for him. Abel, bring your sacrifice to me. Abel is a shepherd so he brings a lamb.

Can I go deeper with this? I'm trying to preach but I feel a teach thing on me. You see, in the previous chapter, we learned that God killed an innocent animal but we don't know what kind. By the time we get to chapter 4 we know that the animal is a lamb because Abel is a shepherd. So what we are gaining is insight into God's strategy for humanity.

Tell PETA what I said. And they covered his nakedness in fur of some sort, blood running down his legs to remind him of the price that was paid for him to have life. That the life that he now lives, he lives in the stead of the animal. That the animal's covering is because the man has ceased to be the man, he has become the animal. And the animal dies because he has become the man. First mention of substitution.

Here's the shadow of Calvary where I traded places with him. He who did no sin became sin. He took my sin, thereby my death; I took his life; thereby I carry his name. He said, "Now, when you go before my daddy, since you covered with my blood, don't use your name. Whatsoever you ask the Father in My name"...

I'm not gonna fool with it like I want to but what I want to leave planted in your head is that the blood can talk. It's not just that it covers. It talks. It intercedes. When I have no voice, it speaks for me. No wonder Jesus carried it to the mercy seat 'cause it speaks for me.

You remember when he rose from the dead and Mary got ready to touch him, he said, "Don't touch me. Touch me not for I have not yet ascended to my Father". Now you know what that means. He rose as a high priest. He was carrying the blood that would speak for me. He didn't want her to contaminate it by touching it, and he said, "Don't touch me 'cause I'm going up with this blood and when the blood hits the mercy seat, the Holy Ghost will fall in Jerusalem and the church will".... Oh God. Oh, now you're... c'mon, are you with me?

Now we understand, I'm almost finished, we understand the context. Y'all crazy just like me, I love you all. I understand the context of the text, I understand the theological ramifications of the text, but my problem is I still have a disappointed, grieving, wounded mother. And she's walking around in a field, she's walking around in a field, in a crime scene, and her son, her son is... my child is dead. My child is dead. And my other child is cursed. And I lost two in one incident. They went out like they came in. They came in, in twos, they went out in twos. One of 'em went out to the murder and one of 'em went out to the judgment, and my womb is empty again.

And so it looks real bad. And it looks like all the pain of her travail was wasted. She was the first woman to go into labor and had natural childbirth and then when the pains got intense there was nobody to tell her to push because sometimes God will call you to do something without... And you don't know when you're supposed to breathe and when you're supposed to push, and you don't know how you're supposed to push because where God is taking you, nobody has gone there before, and you crave somebody to mentor you because you're going into a place you've never gone before.

There's a little arbitration clause in the curse. It says: "In sorrow and travail shall you bring forth children". And the next verse says: "But your desire shall be to your husband". And even though you might say you might never do that again. I love her. She hadn't said nothing the all time, she said... That was the best part of my whole message right there then, "Uh-huh". The desire came back. There's somebody in this room, you have gone through so much pain and so much hurt, it has left you numb? You have been angry, and you have been bitter, and you have been frustrated, and now you're just numb. The suffering was too intense and now, even though you wanna feel something, you can't feel it. You're numb. But the Lord said, "Your desire is coming back".

The Lord said, "In spite of your pain, in spite of your suffering, in spite of your agony, in spite of the trauma that you have incurred to your soul", lift your hands up, "your desire is coming back". God said he is going to revive the part that died and he's gonna renew your strength and your latter days shall be greater than your former day.