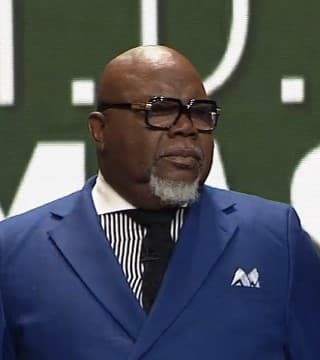 Over and over in Scriptures, when Jesus healed people, and they wanted to stay, he would send them away. He wouldn't let them stay. In our text today, something has happened in Jerusalem. Something has happened in Jerusalem. It was a culture shift, it was a move of power, it was a veil split, it was blood on the mercy seat, an old debt was settled, an old covenant had rolled into a new one. Mercy had collided with grace.

Slap somebody and tell 'em it's a setup. It is, it is, it is, it is tick-tock tick-tock tick-tock tick-tock tick-tock. It is the timing of the Lord that you have to watch. He could've filled them with the Holy Ghost at any time, but it is the timing of the Lord. It is true that Pentecost is 50 days after the Passover, but it is also true that the Passover is a tradition whereby devout men from every nation has come, and all of this is colliding together, theology and sociology all coming together at the same time. It is a sociological tradition amongst religious people to come with their wares to do their harvest at the time. It is a religious time of the year when we go from Passover to Pentecost, and it's just so happened that Jesus was crucified around the Passover, and 50 days later the disciples are shut up in the upper room, and it's all coming together.

It was in Jerusalem where the Holy Ghost fell, and so when the Holy Ghost fell in Jerusalem, it was falling on the same place of glory where the glory had fallen on Solomon's temple and the priests had laid prostrate in the floor, only this time it had fallen ushering in a new dimension. This is not just an individual being filled with the Holy Ghost, because we see them filled in Acts chapter 10, we see them filled in Acts chapter 19, and never again do we see a sound from Heaven, a mighty rushing wind, cloven tongues like as of fire.

Only in Acts chapter 2, because this is the inauguration of the dispensation of the Holy Spirit, and every inauguration needs a parade, and so God sent the wind and then he sent the cloven tongues and then he sent the fire, for it was the processional as the Holy Spirit came in and took its residence and set on this earth and begin to reign and rule and to push back the powers of darkness, so that we would be effective in ministry with that Jerusalem, where the council met after the day of Pentecost over and over again. They stay close to the place where it started, and they stay close to the place where it started so long that God had to do what he did at Babel. He scattered them.

Somebody shout scatter. Now, your old girlfriend's gonna feel a little funny, 'cause you don't call every morning at 9:30, but that's all right. You can call her once a week at 9:30, that you need to irrigate your life with new idioms of thought, new ideas, new concepts. Don't be afraid to evolve, because after a meeting like this, the only thing left to do is scatter. Stand on your feet. If you are going to take over the world, if you are going to take over the world, you gotta take over banking and business and politics and theater and opera and art and creativity. The only way you can do that... you can't do that hugging Jerusalem.

Somebody holler scatter. I'm gonna really go deep. I'm really gonna go deep. How many married women do I have in the room? He knows you. You got a routine. You get off work, have dinner, you go take off your makeup, you roll your hair, you put on them raggedy flannels. You wear them shoes that got your toe prints in 'em. Somebody holler scatter. Y'all have sex every second Thursday. It's the same signal at the same time in the same way.

Somebody holler scatter. You preachers, you preach the same way all the time. You preach the same way so much so that the musician knows when you're getting ready to hoop. And Oh, Lord! And you have trained your people to only recognize God in one form, and the problem with the disciples is anytime Jesus showed up in another form, they didn't recognize him. When he came walking on the water, they thought he was a ghost because he showed up in another form. And you imprison the power of God with the traditions of men. You dumb down people into ignorance until they think there's only one way to do a thing. Somebody shout scatter.