TD Jakes - There's Nothing as Powerful as a Changed Mind 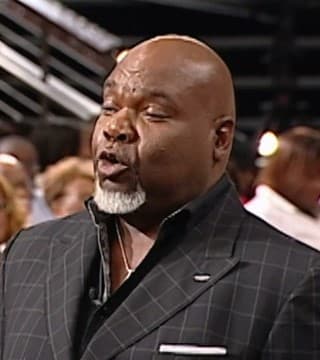 Esau did something stupid. Now, everybody in here has made a dumb choice about something or someone or some moment, and you live with the consequences of that decision nine months later or three months later or three years later. We all live with the consequences of our own stupidity. What is disturbing to me about the text is not the stupidity with which Esau made the decision, but it is rather that when Esau got ready to change it the Bible said he sought with repentance, with many tears, and found it not and lost his future. Not just because he did something stupid, but because he was unable to change what he had set in motion over his life.

It is that that I wanna deal with today. It is not the mediocre ideology of doing something stupid, because that is common to all of us, but it is the crisis of being caught in a system of stupidity through which you cannot escape. Though you seek it with many tears, you feel trapped to repeat the same mistake over and over and over again, and you don't know how to get out. The difference between us is not that we haven't done something stupid. We've all admitted, but some of us get stuck on stupid, and we keep going after the same kinda person or the same...

We keep living beyond our means. We keep falling prey to the same mistake and in spite of our desire to change it — this is the frustration of life: to desire to change. It is not frustrating to be happy to be down under, but to desire to change and not be able to do it. That Scripture always bothered me. That he sought repentance with many tears and found it not and lost his inheritance, and he is scarcely mentioned at all, though he was destined to be in the lineage of greatness. He forfeited his greatest moment over a bowl of soup and an inability to correct a pattern, a pathology of dysfunctional decisions.

That's what this text is all about and only a novice would take it anywhere else. It is there that I wanna focus my attention, because the truth of the matter is all of us know people who are stuck, stuck in a pattern. You can go back through your whole life and see Dumb, Dumb Jr., Dumb III, Dumb IV, Dumb the Dumdum, yeah. And the real funny one is the people who have been married like four or five times, and they keep marrying the same person with a different name. It's really funny. Didn't you learn with the first serial killer you married? Why would you go and be attracted to another serial killer? You thought you were gonna change him, too? Dumb Jr. and...

Now, I admit it, I have been dumb about this, too, because I'm a sucker for some tears, 'cause generally speaking I don't cry. Only in cases of extremes, and so I'm impressed when people cry and assuming that they are like me, at the point, like, if I cry and tell you I love you, I mean, it's bad. I mean, you know, I'm drawing your name on the refrigerator and stuff. I mean, it is just sick and if I get mad and start crying you better get.... whoo!

See, I can't turn red, but if I go to crying and them tears start running, they don't come out the front. They come out the side. They run down the side, north and south. They just be running, and my eyes will be batting when my nose get wide like a rhinoceros and my lip goes to quivering, but I am amazed at the people where tears are no indication of any inner change at all. They can cry and be lying. Does that amaze anybody other than me? They can, I mean, just be lying through their teeth. "I wasn't there. I don't know why you would even think that I would do something like that".

You know you're the only one... Esau sought a change of mind with many tears and found it not. Metanoia means a change of mind by pivoting direction. A change of mind that is so strong that you pivot direction. It is not a fanciful ideology. It is not a mere notion of possibility. It is the extreme change of mind that becomes so radical that it affects behavior. You will not have to do this often. You will not have to do this often. This is not the daily stuff you do, "Father, if I've done anything forgive me". No, no, no, these are those big directional changes where you say, "I'm going in the wrong way, and I'm gonna have to flip the whole thing around, or I'm gonna lose my future over a bowl of soup".

Can I go deeper with this? About a month ago, the Lord gave me an illustration. I thought I was gonna put it in another message and didn't use it, and I saved the illustration. I thought the illustration was really good for what he was talking about, and I wasn't released to use it until now. And maybe this will help you see what I'm saying. You see, if you go on a computer, they have on a computer what they call default settings, so whether you're in Microsoft or whatever it is, whatever program it is or any kinda program, it has a default. The default sets in the computer some principles and ideas to which the computer is committed. It does not mean that you can't function outside of the default. It just means that even if you deviate from the default the computer will automatically take you back to default settings and if you don't want it to do that it's more than changing the font.

You have to change the default, so type for me. Where you at? Type. We're gonna show you something. "There is nothing as powerful as a changed mind," okay? Now, put it in the other way. Okay, "There is nothing as powerful as a changed mind". All we did was change the font. We changed the font and while we're typing, whatever we type in, this font will appear in this font, and it will appear that it has changed. But it really has not changed, because the moment you go out and come back in again it will come back up back to default.

That's not the problem. The problem is when you go back to yourself you are stuck in the same pattern that you were before, and you can't figure out how to break it. You've cried about it, but you're still going back. You've shouted about it, but you're still going back. You've even prayed about it, but you keep going back, and you can't figure out how somebody who cried for it and shouted for it and sang about it and started going to church on Sunday and, "Why does this still keep happening to me"? I don't know whose prayer I'm breaking into, but I'm breaking into somebody's prayer saying, "Lord, why do I keep going through the same things over and over again? I go to church now. I tithe now. I shout now. I leap now". And the Lord sent me here to tell ya it's no problem with your sentence.

There are some people in here right now that used to do drugs, all kinds of drugs, crazy drugs, strung out on drugs. People wouldn't believe who you used to be. Your old friends never thought you would ever get away, but one day you got sick and tired of being sick and tired, and you said, "Wait a minute. I'm not just gonna change my clothes. I'm not just gonna change my address. I change my mind. I completely change". Yeah, there are some women in this church right now you used to be easy. All they had to do was tell you, you were cute. You were easy.

Donna: A hundred and twelve.

Bishop Jakes: About 112 pounds She weighs about 112 pounds. Ah, let me see. I'm just a little shy, just about 30 pounds or so shy of being three times bigger than you. You're gonna do what I say. You stand where I tell you to stand. You wear what I tell you to wear. You get up when I tell you to get up. You sit down when I tell you to sit down. All of that sounds good. She got every reason to obey me. I'm bigger than you. I got the money. I got the resources. I got the name. You don't know who you're fooling with. Woman, I'll slap you so hard, I'll slap you all the way back into your seat. I could do it. A hundred and twelve pounds. I could lift you for exercise. I work out with more weights than you. You don't stand a chance against me.

Why it doesn't work for Esau is that he sought a changed mind with emotions, so he gives a lot of emotion. Let me tell you something that's better than emotions, better than strong emotions, better than strong emotions, is a decision. I dare you to make a decision. The decision might not even have any emotions in it at all. The prodigal son was in the hog pen surrounded by the swine, about to eat that that the pigs ate and all of a sudden the Bible said he came to himself. He didn't change his clothes. He didn't change anything else. All he did was change his mind.

Now, I'm gonna show you something, then I'll be done. Once you change the default settings and you have a new normal, there may be moments, rare occasions, that you find yourself typing in your old font. And if you find yourself typing in your old font, the devil will come along and say you haven't been changed, but I'm gonna help you out in here. This is how you know you've been changed. It's not that you might not mess up and do what you used to do. It's just that it's no longer your normal and when it's no longer your normal you will never go back to it like it used to have you, 'cause the moment you get out of the situation you change back into who you're supposed to be.

Y'all don't hear what I'm saying to you. Both the pig and the sheep can fall into the same mud, but the difference is in the default. The pig is defaulted to like the mud. The sheep has a default that says, "I don't belong in this mess. I might be in this mess, but I don't belong". Holler, "I may be in it, but I don't belong here. I gotta get outta here". The sheep will cry and scream and yell and fight because it no longer belongs in the mud, so here we are.