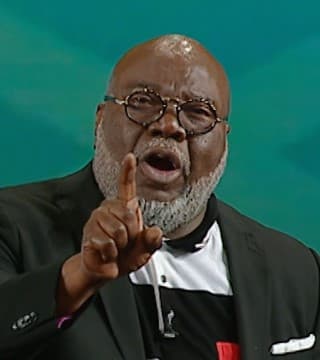 He had left Peter, who he said was the rock, in charge, who delivered the inaugural address on the day of Pentecost, and Peter became a fill-in for where Jesus left off because he was covering them. But now, Peter... oh, you didn't get it. I'm trying to tell you it's happening again every time I get somebody that leave me. Every time I take two steps forward, I get knocked three steps back. Every time it looks like I got love in my life, it falls apart. Every time I'm about to get things under control with my finances, something breaks down, and I'm by...

I wanna talk to some people who have anxiety because it's happening again. Touch your neighbor and say, "It's happening again". This kind of prayer doesn't come because you have a prayer journal. This kind of prayer comes because you have anxiety and because you're afraid and because the enemy has brought your greatest fear down on your head, and you're saying, "God, if you don't get me out of this, I'm gonna lose my mind, 'cause here it is happening again". I need a hundred people who know what it's like to see themselves... to lose Peter, Peter, the one who Jesus said is the rock. "And upon this rock I will build my church".

And Peter is in jail, and don't tell me that he's gonna get out and everything is gonna go well, 'cause you remember what happened to Jesus. Suppose they kill him? If he's the rock, suppose they kill the rock? If he was the first voice I heard when I got saved, and 3.000 people were added to the church that day, and he is my mentor, and he is my teacher. I have nursed at the breast of the milk of his word and if they kill him where will I get the milk? Separation anxiety disorder has set in, and the church has gone into fervent prayer. Sometimes God will allow things to happen in your life to wake you up from being a spoiled brat and remind you that you got a devil to fight and put you on your knees so you can call on him with power and with clarity.

Now, let me first prove that sleeping is faith, that sleeping is an act of faith. You remember when Jesus was in the storm on the boat, and everybody else was hysterical? And the Bible says Jesus was asleep on a pillow. God will take you through trouble, and you'll be sleep while other people are going crazy because you believe that God has already got that thing worked out. Who am I talking to? The very fact that you can sleep is a sign of faith.

So, the Bible says that the angel appeared in the prison, letting me know that hell can't make a prison God can't break into. Even yours, your prison, hell can't make a prison that God can't break into, even yours. The angel appeared, and the 16 soldiers didn't do nothing about it, 'cause the angel just broke all the rules, broke all the protocol, shwoop, and appeared. Slapped Pete upside the head and said, "Get up. Get up before you get comfortable being down".

Take this Word if it's yours. You had to go through a lotta stuff to get where you are right now, but you have gone through your last go-through. In this next dimension something that you've been praying for a long time is just gonna... slap your neighbor and say, "It just opened". It just opened.

Now watch this. The screens are about to collide. The prison screen and the prayer screen are about to collide. Every door that was closed, prayer opened it, except this last one. When you bring the supernatural into the natural... Peter gets to the door. The door is closed. They're on the other side singing and praying, "If you call on Jesus, he'll answer prayer". Watch this. Having church has become such a routine. That they're so busy having church, they have stopped expecting answers. They are happy to pray about it and shout about it, but not willing to have the faith to receive it when the opportunity comes. Here comes this nameless woman. No title, no position, no credentials, but she could hear. Sometime the person who makes the most noise don't have the best hearing.

She comes through the door and says, "Not only somebody is at the door, I recognize his voice. That's Peter's voice". This woman is so familiar with what she's praying for, that she don't have to see it to recognize it. She can hear it and be sure that's him. Have you familiarized yourself with what you're expecting God to do? Would you recognize it if it knocked? Because I see people pray for better all the time and reject better when it comes.

Now, I'm almost done. This is important for you to get this. Until you believe what you have been praying for enough to bring your actions into alignment with your prayer life, you will believe it, but you won't be able to receive it, because prayer will bring it to you, but you have to open up the door. Some people pray for better, but they're used to lesser, so when better comes they have no appetite for it. The children of Israel prayed that they would get out from under Pharaoh's hand, but when they got in the wilderness they didn't like the food, because all of their historical data was hooked on leeks and onions, slavery food, so freedom food tastes funny to people who grew up on slavery food.

Hey! Hey! Watch this. Everybody is standing. I'm done. Everybody is standing. I'm done with this. Peter says it was like a dream. It was like a dream. It was like a dream. He came to it. He knocked on the door. Rhoda shouted about it. She got excited about it, she hollered about it, she testified about it, but she didn't open it. That's where the church is at. We have become more proficient about celebrating about it than we have at receiving it. Until you give yourself permission to open that door, until you give yourself the permission and the courage to open that door, you will continue to get more bitter at people who do and hate them because they went in and got what you shoulda had long time ago.

Watch this. I don't know if you can receive this or not. It might be somebody watching online, that it's for you. I don't know. It may be somebody in the balcony. The enemy fought you to get here this morning, and I know. I believe the storm came to keep you from getting here. The enemy will do anything he can to discourage you. The Lord told me to tell you that what you have been praying about and what you have been up under attack about and what you have gone through such warfare about and had shackles on your situation about, that that which was far off has drawn nigh, and your blessing is at the door.