TD Jakes - The King is Coming 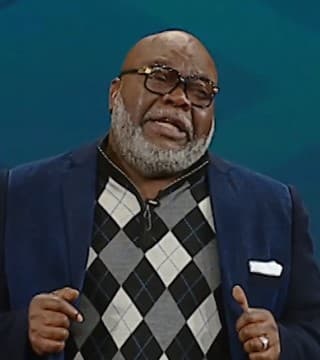 See, if you read the text and all you see is one king, you missed the point. David is the King but God is the King of kings and Lord of Lords, and he is a mighty God. Glory to God. I feel something in this place. And so, when you see David coming out of his clothes, he knows that the greater King is standing there that will not share his glory with another. And so, he starts coming out of all his accompaniments, all of his regalia, and all of this, and all of that. I got to come out of all of it because I'm bringing back the King of kings. You might be important from 9:00 to 5:00, Monday through Friday, but when you come in this household Sunday morning, you need to come out of your titles... Glory to God.

Warn your neighbor and touch your sister and tell 'em I'm getting ready to strip myself. I might be the mayor on Monday, but today, I'm going to strip myself because I'm standing in the presence of a greater King and a greater power. I might be the chief on Monday but right now, I'm just a child of God, calling on the name of the Lord. I might have power during the week, but the greater one is behind me and I humble myself before him. I strip myself. I come out of my stuff. I come out of it. I don't need it. I don't have to have it. I'm coming out of it. I feel a praise about to hit this place. I'm feeling an anointing about to erupt in this place. Touch three people and say, "Come out of it".

The worst thing you can do is make your son be you. Tradition. You come from a family of lawyers, you must be a lawyer. Break tradition. Oh, glory. Whoo. Whoever got that, you got it so deep I felt it all the way up here. Oh, something just broke loose in your belly, it broke loose in your spirit. Oh, you ain't gon' never be the same again. You just broke loose some... I heard the chains fall when you hollered break it. Somebody holler, "Break it". Break it. Break it. If you're going to be a lawyer, break the tradition. Don't be like the rest of them. Stop trying to fit in. Stop trying to act like 'em and be like 'em. People never remember ordinary. They always remember extraordinary. Break the tradition. Break the tradition. Take the risk to do you, baby, to do what you see, to do what you sense, to do what you believe.

The man who started taxing companies was so smart. He was so smart. He built a billion-dollar corporation because he started taxi companies. But the man who started Uber saw something else. You remember when they started building all these big warehouse operations and they went all over the country and everybody had these warehouse. Like J.C. Penney and Sears, and Toys R Us, and it was awesome. And then somebody saw an app. When I came up, we had drive through windows. You could drive through and a little, pretty girl would come out to the corner and take you order, and bring your hotdogs out to the car and put a tray on the window. That was cool and it was awesome. Big root beer mugs and hotdogs. Good old, greasy, juicy hotdogs. We never thought that there'd be a day that they'd bring the food to the house.

God is breaking his own rules. Oh now, this is teaching row. I know it is. I know it. If you can, if you can hear what I'm preaching, I'm preaching next level stuff. Are you ready for this? This is next level stuff. God, God is breaking his own rules, because God doesn't serve the law. The law serves God. God doesn't serve the rule. Why would God make a rule he couldn't break? Then the rule becomes God. He is Lord on the Sabbath. So I can heal on the Sabbath if I want to 'cause I'm the CEO of the Sabbath day and I can do what I want to whenever I want to. And yes, I know the man got healed on the Sabbath day. Don't you lift your ox out of the stall on the Sabbath day? You got to do what you got to do. I'm God. Let's get this thing done. Whoo.

And what really blows my mind of all the people to say something, James. James says something. James shouldn't say nothing. There is nobody in the whole New Testament as legalistic as James. James is the one who's talking about faith without works is dead, and arguing how you ought to keep the traditions of the fathers and this and that. James. Jay, boo, what's going on? James said, "Brothers, listen to me". Come on. "Simeon hath declared how God at the first intervened to choose a people for his name from the Gentiles. The words of the prophets are in agreement with this. As it is written," come on, "after this I will return and rebuild David's tabernacle and it's ruins. I will rebuild it. I will restore it".

In the last days, let me tell you what the sign that we have come into the last days, is that radical worship will break out in unlikely places. Catholic folks filled with the Holy Ghost, nuns talking in tongues, churches praising God and getting lost in praise and shut up. Young people dancing in the Spirit of God, leaping up and down in the air. In the last days, I will restore the tabernacle of David means I will release radical worship, worship that breaks all boundaries, breaks all thoughts. I will release the kind of worship that causes you to get healed without the laying on of hands. Nobody touch ya, nobody pouring oil on ya, but you still got healed. While you were dancing, the lock disappeared. While you were praising God, the glory of the Lord stepped out. In the last day, I will restore the mishkān. I will restore the tabernacle of David. Make some noise in this house.

Corinth was doing everything and they had the gifts of the Spirit, the sign of the Spirit and talking in tongues, and Paul had to straighten them out, he had to clean him up a little bit because they was mixing it all up together. They've come into the community, and they was getting drunk, they was heathens. They were like the cousins that you don't want to come to your house 'cause they come in and tear up everything, but God fills them with the Holy Ghost. They had to be disciples. This is where 21st century ministries got to change. We got to stop putting people out of the church. We got to disciple 'em. We got to work with them where they are. We have teach 'em and train 'em, but we can't just throw 'em out. You can't scale a fish you ain't caught.

Are y'all hearing what I'm saying? Because you don't know what God will do with some of the most unlikely people. I want to talk to some people... oh God, I'm out of time. Oh, Jesus. Oh, God. I looked up at the clock and I got sick. I want to talk to some people who have ruled yourself out because you think that you are too bad to be used, and because of what you did wrong, you think that God can't use you. And I came to tell you, you're wrong. You're wrong. I came to tell you that the blood reaches to the highest mountain and it flows to the lowest valley. I came to tell you that it's time for you to stop being ashamed of yourself and recognize that God still loves you and he has a plan for your life.

And I know you're a gentile but God will fill you with the Holy Ghost, and he'll deliver you, and he'll set you free. I got a Word for you. I got a Word for you. I am not condoning your mischief, I'm not calling your wrong right, but I'm telling you that God's purpose pre-exempts your pain, and your mistake and your struggle. And God already knows your secrets. I'm telling you the truth, and I'm telling you that you're harder on yourself than God, that you have cursed yourself and God has forgiven you, and that he loves you with an everlasting love, and that he has a plan for your life and you need to get out of his way, that the tabernacle of David is everything to you because you are the tabernacle of David. Against all odds, against all rule, God has raised you up for such a time as this.