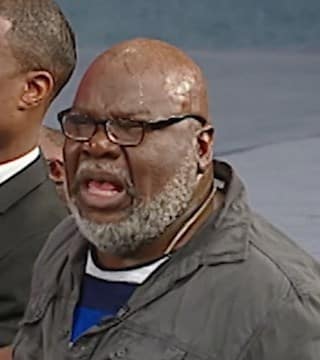 And I want you to understand this whole notion of conversion. If you go back to doing something that you used to do, you revert. I reverted to my old ways, that means I revisited who I used to be. See, you revert. If I'm walking along and, all of a sudden, I got a detour, I divert. That's a diversion, di, two ways, di, two ways. I was going this way, but that diverted me, almost like a distraction, it's a diversion. When I take something like this speaker, and I get up here, and I lay on it, I pervert it. The reason I pervert it, it's not that I can't lay on it, it's that it was not built, any time you use something for something that it was not designed to do, you pervert it.

Now, it will work, but it was not designed for that, that's perverted. So, whether you revert, divert, or pervert, it's all about change, it's about movement, it's about direction. So, when you convert, I was going this way, I was going this way, and then I heard somebody call me, and I turned around and start going in the opposite direction, that's conversion. Conversion, conversion, conversion, conversion creates conflict. Conversion creates conflict because we build our world around who we were, and conversion comes, but the world around you hasn't changed to fit the conversion. So, all of your buddies, and all of your support, and all of your friends, and all the stuff you got in the house, and all the magazines you got, and everything that was built around who you were, now does not agree with who you have become.

So, even though you have converted, if you're not willing to convert your environment, you're going to be in constant conflict. If it were not enough that I didn't have to survive all of the external conflict, Paul now introduces that the war he hates the most is not the war around him, it is the war within him. Because, after all, if I don't like you, I can get away from you. I can leave, or tell you off, or shut you down, or at least say, "Talk to the hand". But what do I do when the enemy is in me? And when I would do good, evil is present with me. Now, me being converted has put me in conflict with myself.

So, depending on when you catch me, oh, where are my real people at? Holler at your boy. I have a problem with the old folks song, said they used to say, "I've been saved all day and I'm glad". I wanna change mine, "I've been saved an hour and I'm glad". I'm taking an hour, let's celebrate the little stuff. You've been saved all day? Just another day that the Lord has kept me. He has kept me from all evil with my mind stayed on thee. I hated that song. I hated that song, 'cause I didn't have too many days that for 24 hours I didn't think about nothin' but Jesus. I love how when I expose myself, y'all get quiet. Like y'all the tribunal holiness church of God in Christ.

Thank God in Jesus, they just lookin' at me like, "Oh, Bishop". Twenty-four hours, you ain't thought no evil? Ain't nobody got on your nerves in 24 hours where you had to put your hand over your mouth and say, "Thank you, Jesus"? Thank you, glory to God. Paul now says that I am walking around in conflict because my nature, it is my nature to serve the law of sin.

Now, if my nature is to serve the law of sin, and he says in the text, my mind is to serve the law of God, if the enemy attacks my mind, I got nothin' left to help me serve the Lord. Because my nature is already boycotting this decision anyway. My nature talkin' about, "You gettin' old. If you gonna do something, you better do it right now. You ain't got long, your clock is ticking". Women ain't the only one who got a clock, baby. Everybody lookin' at the watch nowadays, yeah. My nature said, "If you don't straighten him out, he gonna think you a wimp. You need to run up over... I'm a grown man, dog".

So, what he doesn't do, what he does do in the 7th chapter, he shows me that I have to deal with conviction and that I have a conversion that creates a conflict, but in the 8th chapter, he says the conviction comes to convert me, but not to condemn me. Can I take, give me a little bit of time. Give me a little bit of time. See, you won't really get this text if you don't put the text in context to the time. In Paul's day, when a man committed murder, one of the ways that they would judge him is that they would take the body of the dead man and tie it to the body of the living man.

So, they didn't always put you in prison, they made you face what you killed. And they would tie the corpse on the body of the man who lived, so that over a period of time, what you killed would corrupt who you are. And the deteriorating mucus and flesh would crawl into the pores of the skin of the man who did it, until the death that was on the one would infiltrate the other. So, when Paul says, "O wretched man that I am. Who should deliver me from the body of this death"? The Romans knew exactly what he meant, because when you had done wrong and you were convicted, the condemnation was to carry the corpse until the death in the corpse got on the man who did the action.

If you got voices in your head bringing up your past or your present to condemn you, that's Satan. Satan is an accuser of the brethren. The Holy Spirit never condemns you, it will convict you, but it will not condemn you. When a voice says that you ain't never gonna be nothing, ain't nobody gonna ever love you, you ain't gonna ever get out of this rut, you'll never be any good, that's always the devil, because the Holy Spirit is saying if you change your ways, I'll change the blessing. Now, I'm gonna back this up with more Word, because you shouldn't teach nothin' you can't prove.

So, go to 2 Corinthians chapter 1 verse 8. When you have it, say, "Amen". For Paul again says in Corinth, "For we would not, brethren, have you ignorant of our trouble which came to us in Asia, that we were pressed out of measure, above strength, insomuch that we despaired even of life". I gotta stop there with that. I love that Scripture. I'm not even sure it got anything to do with what I'm teaching today, I just love the Scripture. At first, they told me not to put it in there, but I said put it in there, because I just love the Scripture.

This is why I love the Scripture, 'cause the apostle Paul says he was depressed. That's so good. The guy who wrote the Bible says in Asia, we ran into trouble, and it got so bad that we were pressed above measure and beyond strength, he said to the point that we despaired of life itself. Oh, that's good, 'cause the truth be told, if you live long enough, you gonna go thorough something at some time that is above measure and beyond strength, so much that you despair of life itself. But if you hold on, oh, whoo, good God of mercy. I don't know who that was for, but I felt that go out. I felt the life go out of me. I felt the virtue go out of me. I felt the Spirit move on somebody. Just 'cause you depressed don't mean you're not saved. Just 'cause you feel like giving up don't mean you're not a Christian.

If the writer said I despaired of life itself, I wanted to get out of here. He said I was pressed above measure. I went through something that was beyond strength. I despaired of life itself. What happened was in Asia, but it affected me so bad that I wanted to die. I wanna talk to the people who went through something. You know what I'm talking about? Where you just wanted to die. You was going to work and people didn't even know. You just wanted to die. Making coffee, "Have some more coffee. Want some more eggs and bacon"? I want to die. "How you doing"? "Fine," and you wonder can anybody see behind the disguise. Paul, the writer of the biggest part of the New Testament, said I went through something that was beyond strength and above measure and I wanted to die. He says, "But we had the sentence of death in ourselves that we should not trust in ourselves," whoo, God, whoo.

Watch this, watch this one. "But we had the sentence of death in ourselves that we should not trust in ourselves but in God which raiseth the dead". This is one of the few times that when Paul talks about God raising the dead, I don't think he's really talking about graveyard dead. He's talking about dead hearts, dead dreams, he's talking about dead fightback. Have you ever had something that killed your fightback? I got good news for you, God raises the dead. God brought you here this Sunday morning to tell you I'm gonna raise that dead thing up in your life.