TD Jakes - No Room For Distractions 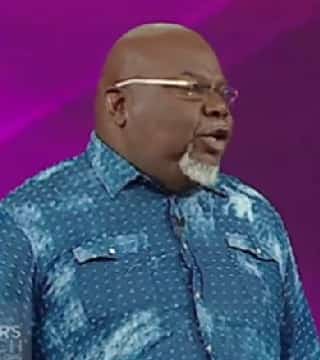 He allows distractions that he does not tolerate at the end. He goes to the marriage at Cana, and he goes there to attend a function, and his mother comes up to him, and says, "Lord, we're running out of wine". And he says, "Woman, what am I to do with thee? My hour has not yet come". I'm not supposed to be doing this. This is not on my schedule. This is not on my itinerary, but bring the water, I'll do it. I'll just do it. And so, the marriage at Cana, thought I think it has Biblical significance, and we'll talk about that on another day, was really a distraction, because his hour had not yet come. This text starts out by saying that Jesus's hour has now come.

There are some things that you can receive in life without focusing, but the greater blessing that God wants to release in your life cannot be done casually, superficially, part-time, with a spirit of indifference. In order to really step into the fullness of your purpose, you have to set your face. I'm surrounded by people all the time who have never set their face a day in their life. They have glanced at it, they have looked at it, they've taken pictures of it, they've done selfies with it, but they've never really stepped into their purpose. They got little glimpses of it, they've hit at it like that, they've slapped it a couple of times, but they have never experienced how powerful you are when you set your face. Wonder what would happen if you would focus.

But, when you set your face to go to Jerusalem, he sent a team ahead of him to go scout out an area as he's moving toward Jerusalem, and they went down to Samaria. And when they got down to Samaria, the Samaritans would not make room for Jesus. Uh-huh, and it's a mess because Jesus has spent time at the well, made an investment in Samaria, caused them to be converted in Samaria. Supposed to be a growing, thriving group of believers in Samaria, but at the moment he needed Samaria, they had no room. Isn't it funny how people have room when they need you? Oh, I'm gonna mess with somebody today. It's gonna be a rough one in here today. Fasten your seatbelt.

They had all kinda room when they're on the receiving end, but when it's your time to receive something, they said, "Oh, no, we don't"... So they said, "Send him somewhere else". And James and John, of all people, I was shocked at James and John. Because this really sounds more like something Peter would do. Because they said, "Lord, do you want us to call fire down from heaven and burn 'em up like Elijah did? Let's kill all of 'em". Wait a minute, they just didn't let us spend the night, we don't have to kill everybody just because they didn't give you the response. Why is it that people wanna kill you just because you don't respond the way they want you to respond?

And now, see, y'all don't hear what I'm saying to you. It don't seem like, to me, that this required that kind of reaction. You can't stay with me tonight is different from dropping a bomb and killing my kids. Let's call fire down from heaven and kill everybody. And that's when my heart got heavy. I wasn't so heavy because the Samaritans didn't receive him, my heart was heavy that the men who were with him, James and John who were close to him, they were in the right place, but they had the wrong spirit. Samaria had no room. They had no room for Jesus.

Don't they understand that Jesus is used to people not having no room? He was born in a manger. He was wrapped in swaddling clothes. He started his life in a barn because people had no room. Isn't it funny how life comes around full circle and everything old is new again? If you live long enough, you'll notice that Satan cannot create, he can only imitate, so he's got to bring the same stuff back over, and over again. And Jesus is saying, "Hey, this didn't stop my mama, and it's not gonna stop me. I'm not gonna be bothered just because you don't have room".

Any time people wanna call down fire, they have lost hope. But, as long as you got hope, you don't have time to spend your energy calling down fire, because my life is not over yet, there is another village. My God, I feel the presence of the Holy Ghost coming in this place. So, since Samaria didn't distract him, and calling fire down from heaven didn't distract him, so here comes a guy that says, "I want to follow you whithersoever thou goest". I'm with you, I'm down for you. I'm going all the way with you. And Jesus turns and looks at him, and says, "Foxes have holes and the birds of the air have nests, but the Son of Man has no place to lay his head".

In other words, following me ain't easy. If you follow me, you gotta pick up a cross. Can you drink from the cup that I drink from? I have a baptism to be baptized with. Can you be baptized with the baptism I'm baptized with? Foxes have holes. In other words, watch this, "Foxes have holes, birds of the air have nests, the Son of Man has no place to lay his head". Jesus is now teaching us that we were never meant to fit in this world. And the phrase that the Lord gave me when I was studying this to share with you was casual Christians.

Casual Christians want a little bit of Jesus in their life. Don't change my life, just ride with me in case we run into trouble. No, you can't have my life, I'll just come visit you on Sunday. I'm not willing to really commit to this thing, but I'll date you. I'll hang out with you, Jesus. I can give you a little praise sometime, but really, really, becoming the substronom of my existence, the opiate of my affection, the center of my joy, I really hadn't considered that. I had just decided that I would come to church. And so, you keep trying to find where you fit in the world, and Jesus says I made holes for foxes, I made nests for birds, but your home is not of this world.

But, the Jesus who ran away, the man who asked to follow him, then turns around and asks another guy to follow him. He asked him to follow him. You just ran that other guy off. "I knew he wasn't about nothing. I ran him off. He saw me as a position, not a person". You know what the biggest thing I lost as I grew in ministry? It's personhood, most people see me as an opportunity. When people see you as an opportunity, they cease to talk to you like you're a person. Do you understand? You understand, yeah, and everybody got a angle. And what the guy was looking for was a position. And Jesus said, "Foxes have holes, and the birds of the air have nests, and the Son of Man has no place to lay his head". In other words, so, don't come to me for a position.

You understand it, don't you? Now, Jesus turns to another man and says, "Follow me," and this man says, "I gotta go bury my father". And that seems to me to be a good excuse, a really good excuse, you know, but Jesus didn't have time for excuses. His hour had come. He needed somebody that would respond without excuse. Listen, now we know Jesus is not cold, 'cause he cried at the tomb of Lazarus. He stopped the widow in Nain and laid hands on her casket and raised her son from the dead. This is the same Jesus. The same Jesus that went into Jairus's daughter and raised her up from the dead. This is the same Jesus that looks at him, because it's late now, "Let the dead bury the dead".

See how his attitude has changed? He used to would have gone and woke his father up, but it's late now. Touch your neighbor and say, "It's late now". Don't expect me to do what I used to do, 'cause it's late now. Don't expect me to go through what I used to go through, 'cause it's late now. Let the dead bury the dead. If you're gonna follow me, you're gonna have to make me a priority. You can't be a casual Christian. Everybody I ever know who ever excelled at anything, who ever broke loose and excelled and became excellent at anything, they always give you trophies and put you in the hall of fame, and recognize you for what you ran to, but it's not what you ran to. Your strength is always in what you were running from.

When you have been through certain things in your yesterday, you can't afford to slack up like other people slack up, 'cause when you get a shot, you take full advantage of it. It is not just your ambition, and your drive, and your goals, it's knowing you can't afford to look back, because if you look back, you're gonna go back, and you have nothing to go back to. Who am I talking to today? I came to tell you who came from the most hellish situations, it was a setup. If your life would have been better, you'd of been lazy. Paul, who was the chief sinner, became the head apostle. Whenever you gonna build a building real high, you dig a foundation real deep. It was good for me that I had been afflicted.

Little Johnny, every night he'd lay in the bed. In the middle of the night, he would fall out in the floor, start crying, and Mama would have to get up and put him back in the bed. Next night it would happen again. By the third night, little Johnny said, "Mama, I'm so frustrated. I don't understand why this keeps happening to me. Why do I keep falling out of the bed"? And Mama said, "Johnny, the reason you keep falling out of the bed is because you never got all the way in".