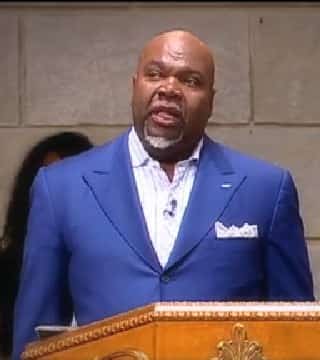 Greetings in the invincible name of Jesus Christ our king. I'm so excited to have this opportunity to be in your home and a part of your life for the next few moments to share the word of God with you. I have an exciting series called Your Divine Destination. I believe it will speak to your life particularly at this time as you move closer and closer to God's divine purpose in your life. The messages that we're going to share are really going to be the catalyst that you better understand where you are and more importantly where you're going. The message I'll share with you today is one you've got to listen to. The message is when God says NO. I know what to do when he says YES. Lord have mercy, how do I manage when God says NO. Stay tuned. I'll show you how to deal with it.

Isn't it funny how different a house looks from the driveway than it does from the hallway? Great curb appeal. Drive by and say woo they're living large. And then they're looking at each other. Paul says, lest I be exalted above measure with the things that went right, God balanced me with the things that went wrong. All caught up in who they may say I am. God balanced me with who I am.

I was interviewed the other day. It's just amazing. You seem not to know who you are. You walk around just, just average Joe and you've done this and you've done that and you've done the other. Aren't you caught up? How do you remain so humble? I said because I know me. I have many issues. That's never been a problem with me. I don't struggle with that. You know my persona. I know me. Balance between who they say you are and who you really are. Your ideals balanced against your realities. Your strengths balanced against your weaknesses. Your triumphs balanced against your tragedies. Everybody has them. Nobody escapes. Don't let rich folk fool you. In some area of their life they are impoverished. Don't let poor people fool you. In the midst of all their financial poverty if you get close to them you'll find the poorest among us have rich that can't be tabulated in the account.

Life is fair. If you have deep revelation, supernatural knowledge, they'll be something to balance. You'll be wise over here and fool over here. Ya'll don't want to talk to me today. You'll be victorious about this. You'll be victimized by this. Every victor is a victim in some area of their life. And every victim is a victor in some area of their life. They may not tell you. It is not so much from the enemy that such pain comes. He said lest I be exalted above measure, God sent unto me a messenger from Satan to buffet my flesh. To buffet. The word buffet in Greek is to like punch with strong punches. To beat up my flesh.

I want to talk to all the blessed people in the room. Who have been blessed in some area of your life. And before you could get intoxicated over the success you had you got punched, buffeted in some area. It not be a seen area. It may not be visible, recognizable, acknowledged. But somewhere in your life if you are gifted, if you are really exalted, if you are really blessed. If you're highly favored, somewhere in your life you're being punched in your gut. That's why the assault of the haters become so overwhelming in your heart. You can't understand how people can hate on you and attack you. Don't they see that behind the scenes somewhere you are being punched, buffeted, he says, in my flesh? Incidentally, put that on pause.

Let me tell you something. It's been a big old debate what this thing was that Paul went through. All kind of conjecture and all kind of ideologies down for hundreds and hundreds and thousands of years, the sages of the ages have debated what the thorn in Paul's flesh was. So I thought today I would demystify any concern that you might have as to what it was. I don't know. They thought I would say something really profound and intellectual and I left a cliff hanger just fall to the floor. I don't know. I do think that God leaves it opaque, if you will, so we can fill in whatever you need to fill in.

So that you can recognize that all of us have something different. Punch yourself. Balances us. That makes us pray. That makes us groan in the middle of the night and cry out to God. Needs you. Can't take this. It's too much for me. Not happy. All of this stuff and no peace. Or all of this peace and no stuff. It will be one of them. I tell you right now. It's going to be. These are the things that so assail my soul and punch me in the gut and balance whatever accomplishment I had brought me down to the place of humility. Said I prayed.

Let me go back. There's something I want you to see. We don't know what it was. But we do know how he felt about it. He travailed before God about it. It was both painful privately. And we know it was humiliating publicly. That's why two people thought it was epilepsy because imagine how wise and profound and intellectual he would be and then have epileptic seizures in front of everybody. Whatever it was, it was humiliating. It was debilitating. Whatever it was, it was not only secretly painful but publicly humiliating in the middle of trying to do what he was trying and be what he was trying to be. Something...

Others say blindness and he would stumble around and couldn't see. We know he couldn't see well. And he wasn't particularly a good looking man. We understand he was a bit of a, you know, yet he was brilliant. Intellectual. I'm trying to get you to understand how life balances itself and how no one gets everything and no one is exempt from pain. Yeah. I'm trying to make you understand that God is just even if he's not fair. He's got to be just. And he balances you're not going to get through this world without using those tear ducts he gave you.

I want you to understand that you will not survive this world no matter how intellectual you are, no matter how beautiful and bold your biceps and triceps may be and have more degrees than a thermometer. You'll have something punching you in the gut that leaves you laying on the floor. I don't know. I speak Greek and Hebrew, but I don't know how to speak to my own child. I don't know. They'll always be something that will escape your grasp, that humbles you. And sometimes humiliates you. And takes all the air out of your balloon.

Paul says, God, I'm out here working for you and I am responsible for I will be responsible for most of the New Testament writings. I have established churches everywhere you sent me. I preached the gospel with power and clarity even when I was in jail. I have laid hands on dead people and seen them get out of the grave. I'm asking you one personal favor. I don't ask you for much or bother you for many things. I didn't say anything about being shipwrecked or beaten or locked up in the jail. But this is one favor, take this away! Because this overwhelms me. It's too much for me. I'm drowning in it. It gets me down. It wrecks my life. It gets me out of focus. Take it away!

What is the thing that overwhelms you? What is the thing that overwhelms you, overwhelms, that you drown in? That's what he prayed about. Three times. Why would Paul have to pray three times? He didn't have to pray three times to raise up the dead man who fell out the window. How is it that God works so good when you're praying about other people's problems? O God help me, Jesus. I just want to ask a question. If anybody understands the words that are coming out of my mouth. How can you be so smart about everybody else's life, but your own life... Why are we so wise with other people's dilemmas. And such a fool with our own.

How could Paul have the courage to turn cities inside out and couldn't fix his own trouble? He prayed three times for God to remove this. Take this curse off of me. So I can serve you lake like I want to serve you. Be who you want me to be. I could do it if you just fix this. This overwhelms me. And he said, God, I want you to take this away. I'd be better for you. If I was better with me. Come next Sunday. I'll finish this. It sounds like, feels like I've been preaching, feels like somebody in this room relates to what I'm talking about. Fix this. It seems you should want to fix this. I would be better for you if I didn't have this limitation.

We sea this threefold prayer before only this time it wasn't Paul ya'll, it was Jesus saying, hey dad. I know you sent me down here to do this but let's do a revision on the contract and amend the documents to be transferred a little bit. If it be thy will, pass this bitter cup from me. Three times he prayed. Now he couldn't change the father's mind. Jesus said not my will but thine be done. Paul prayed three times and God said NO. You have been overruled. And then he says, I said NO, Paul. Because my grace is sufficient.