TD Jakes — What to Do When It Stops Working? 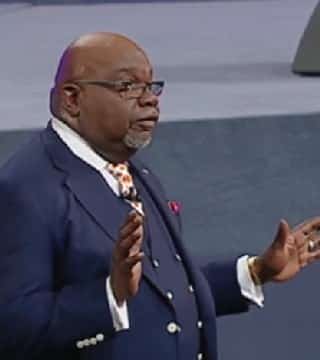 Hey, everybody, I'm excited to have this opportunity to share the Word of the Lord with you. I believe in the Word of God because it is powerful and revolutionary. David said, "Thy Word is a lamp unto my feet and a light unto my pathway". I believe that the Word you're about to hear right now will illuminate the next steps that you need to make. You don't wanna make those steps in the dark, so hear ye the Word of the Lord.

In other words, you cannot fit in and stand out at the same time. So, you must decide, do you wanna hang with the hosts or are you willing to pass through the hosts? See, you cannot have it both ways. You cannot need company and be in leadership. You got to pass through it and not get hung up in it, because you can't lead what you're in. I don't know who I'm talking to. Pass through the hosts. You are to speak to them, but you can't speak to them if you need to be one of them.

There's always somebody standing in between you and what God has promised you, pass through the hosts. Oh my God, I feel like I'm talking right to somebody. I wish I knew who it was. Who am I talking to? Have you been praying to fit in something that God is trying to get you to pass through? Great leaders pass through the crowd, they pass through the crowd. I think it's so funny, if Dr. King would come back today, he would be so shocked at all of the African-American Baptist churches that support him were the same people that rejected him and put him out of their organizations when he was leading.

When he was here, there were no highways named after him, none, no schools, no buildings, no nothing. Controversial, rejected, denied, ostracized, now everybody's talking about, "Oh, he's a hero". Muhammad Ali went to jail and then he died and everybody's singing, "Oh". In the time of transition, don't expect to be liked. Pass through the host. Yell at somebody, say, "Pass through it". Don't get hung up in it, pass through it.

Number two, prepare your victuals. Now, this comes from a God who's been cooking for me for 40 years. Where is my skillet? Where is my 40-year-old pot? Forty years is an entire generation. He is speaking to a generation who is used to being fed, telling them to cook. Have we not raised a generation of people who are used to being fed, entitled? "I'm not gonna work, I'm waiting on something to fall". "I'm not gonna do it like the old folks did it, we don't have to do it no more". Update, get the news flash, it's falling now, it just stopped.

What do you do when what you expected doesn't work? You thought you were going to be discovered. Your mama told you you were cute and you know you were gonna be a model. And so, you moved to Los Angeles and now you're working at Burger King, funny but true. What do you do when it doesn't work. Now, the God who used to just make it happen is now requiring something of you that you are not used to giving. He now says, "Cook". I don't have no recipes, I don't have no background, I don't have no degree in this, I have no culinary skills. Cook or starve.

Let me tell you how I got on this track, can I go a little bit deeper? Actually, when I started thinking about this I wasn't looking at either text, I was looking at Samuel, where you preached a few weeks ago, and about Hannah, and when Hannah birthed Samuel. The Bible has a little notation about her birthing Samuel that is important. She was to bring Samuel to God, but God would not take Samuel until he was weaned. And so, I started thinking about being weaned, and I started thinking about how babies cry when they are being weaned. Because they are used to getting food from one place, and now they have to get it from another, and the transition is hard on the baby and the mother, because transitions bring up emotions.

But what the baby doesn't understand while he's crying, just because Mama's not feeding you at the place she used to feed you doesn't mean that she's not gonna feed you at another place. She is not mad at you, it is not that she doesn't love you, she is just trying to break your dependency from getting it over here so that you can get it over here. It will require more work from you, but you are too big to still be hangin' off my chest. So, the Lord said to me, "Tell my people that just because I cease to give it where you like to get it doesn't mean that I haven't provided it, I'm just providing it in another place". Who is that for, make some noise.

Now, you can either cry 'cause the manna ceased, or you can boil you some water and pick you some collard greens, 'cause the show must go on. Always know your audience. Now, it's still God providing, but he's providing in another place, and you are whining, "Make it like it was. Why is it not working? Waah, make it like it was". And God said, "Because you are close to the promise, I must wean you from how I provided in your wilderness, because you are too close to it". Watch this, prepare your victuals. The stopping of the manna is a sign that you are there.

When what used to feed you stops feeding you, it is not a sign that God has forsaken you, it is a sign you are there. The Bible said that when they got near Canaan, here's your sign, the manna ceased. I wanna talk to everybody in here who had something stop on you. The reason you had to be here this Sunday, the reason you had to log on to this broadcast, the reason you're streaming on right now is that you misunderstood what stopped. You thought it was a sign that God had rejected you, that the favor of God wasn't on you, and you've been emotionally distraught over what is not working. And the Lord sent me here to tell you that it stopped working as a sign that you are closer to your promise than you have ever been in your life. Whoever that is, take 30 seconds and give God some praise.

That's why the enemy is attacking your mind with stress, and anxiety, and nervousness, and fear, because the enemy knows as long as he's got control of your mind, you can't think the kind of thoughts that will move your life into the place that it ought to be, so he attacks your mind with anything to distract you from being able to focus, but you need to shake yourself and say, "The devil is a liar". I don't have time to hang with my old friends, talking about my old subjects, listening at the old jokes. I don't have time to talk to the gossipers. I don't care if Harry is going with Sally or not, I got to fill my mind with sustenance thinking because I'm fed by my faculties. "As a man thinketh in his heart, so is he". God says you aren't gonna be no better than you think. No wonder the devil is after your mind. Shake off every distraction and focus, fed from your faculties.

Touch five people and tell 'em, "I'm fed from the fight". He renews my strength, he makes my feet like hind's feet. You tell 'em, "I can't, the devil is a liar. I'm fed, I'm fed from the fight". I'm fed from the fight, I'm fed! Okay, give me five minutes, I'm gonna wrap this up. The bell on the chicken about to ring. Ah. He told 'em to pass through the hosts. He told 'em to prepare their victuals, and then, the third thing he told 'em was to possess the land. The land is yours, I got the deed in heaven, it's been written in eternity, the promise is yours. The inhabitants on the land are vagrants on your promise. You're gonna have to fight them off to get it back, but I'm gonna anoint you. I'm gonna anoint you to possess the land. I don't know who this is for, it's good that you walked around it, it's nice that you claimed it in prayer, it's nice that you spoke the Word over it, but you're not gonna get it like that. You're not gonna name it and claim it, you're gonna have to go in there and snatch it.

Give me that phone, that's how you take something. I didn't ask for it, I didn't beg for it, I didn't cry for it, I reached out and snatched it. Give me my child, give me my business, give me my future, give me my joy, give me my peace, give me my destiny. Possess, stand up on your feet. What is yours? I am forbidden by Scripture to take what is not mine. If I go after something that's not mine, the Bible calls it coveting. "Thou shall not covet thy neighbor's wife". "Thou shall not covet thy neighbor's house". I cannot possess it if it's not mine. The only thing you need to pray before you build, before you buy, before you move, before you marry, there's only one thing. Not, "Do I have the money," not, "Does the board approve," not, "Do the people like me," I only pray one prayer every time, is it mine?

Hey, everybody, I've gotta stop there. It's been a real joy to share the Word of the Lord with you. May God's grace and peace be with you till we meet again. I have really enjoyed our time together, and I am praying that every mountain would be brought down, and every low place would be brought up, and that God's will would be accomplished in your life.