TD Jakes - Trade Your Peace for His 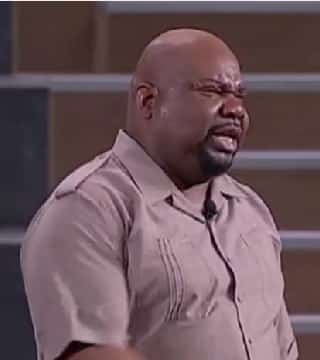 Hello, brothers and sisters. I'm so glad to have the opportunity to share the Word of the Lord with you, particularly this message. The message is called "Trade Your Peace For His". You can't count on yours. Yours comes and goes, but his is stable and steadfast and unmovable. And if you would just give up yours and take his, you would be steadfast and stable and unmovable. Take a look at this. I believe this Word will bless your life. Peace.

You know when you go to the teachers whether that child did that or not because that pattern didn't start in the classroom. It started in the house. And you know which child is the most likely to fall apart, which one will cry, which one will pray, which one will curse you out, which one is a friend, which one is violent, because people develop patterns, and the problem with patterns is that patterns are hard to break. And if you do not break them, the enemy will use your pattern against you. He knows exactly what stimulus to give you to get a response out of you, and you know your level of maturity when the stimulus comes and the response changes. That's how you know you're growing.

When he sends the same stimuli that used to get a certain response and it no longer elicits the same reaction that it used to, you know you have come to the next level. So graduation is proven through attack. The only way to make full proof of the Word dwelling in your heart richly is to expose you to pressure or adversity. And as you are exposed to pressure and adversity, the way you respond to it determines your level of Word.

Now, I'm gonna tell ya somethin'. You can run all over the church. You can dance down to your kneecaps. You can raise your hands and clap and spin around in the floor and still have absolutely no peace at all. You can preach and quote Scriptures and dance and incite people to spiritual hysteria and still go home to dwell in absolute chaos. And the tragedy is, many of you are so strong in your spirit that, whatever atmosphere you dwell in, you bring everything in your house into that atmosphere.

You will remember that the great debate over the great man Samson was where does his strength lie. And the enemy was trying to figure out "What do I have to cut away to take his strength"? because he knew, he thought, that his strength was lying in something that he couldn't remove. That same discussion is going on about you. Satan wants to know "Is her strength in her stuff? Is it in her kids? Is it in his job? Is it in her car? Is it his house"? And so everything the enemy shakes, he is shaking it, trying to destroy your peace of mind. You think you got the victory when you get the stuff back, but that was never what the battle was over. You've got the victory when you resist the temptation to give up your peace.

My heart is racing from the music he's playing. I can feel the acceleration of my pulse and my temperature, responding to the music he's playing. Jesus is saying that the peace of the world is based on what is going on around them. It has to change the atmosphere to have the peace. It has to have everything goin' good, everything calm, no threats, no real bills out of control, no real major problems, no real anxieties. Anybody can have that kind of peace. You don't have to be a Christian to have that kind of peace. Any sane person can have that kind of peace, but that is carnal peace. A carnal person doesn't mean that you're evil or wicked or bad. It just means that you react to external stimuli, that when you react to external stimuli, you are carnal because you take your beat from whatever the world is playing.

Give me drama. When the world starts playin' drama, it starts affectin' you, and you got mood swings, or temper tantrums, or depression, or worry or anxiety. And all the devil has to do is play that song, and he gets a reaction out of you. But Jesus said, "I did not send you into the world to operate with the world's peace". He said, "I'm going to give you a peace that passeth all understanding". Whoo, God!

Are you hearin' this? God wants to give you crazy peace. Peace that passes all understandin' is not carnal peace. It's crazy peace. You know how crazy people... He said, "My peace passeth all understanding". Mind-boggling, crazy, insane peace. Peace that looks like you don't even know what's goin' on in your life. Peace that means you don't respond to the circumstance or the situation. You're dwelling in an atmosphere as if you have lost your mind. He is praying. He is playing the lullaby of your spirit, the peace that God wants to be in your soul.

I want you to understand this because I don't want you to miss this. If you read the text that I just read to you in the NIV over and over again as he uses the term "Do not worry" So what is "worry"? When you find yourself... because here's the problem. In the King James Version, where it says, "Take no thought of where you're going to stay," that really kind of rubs me because I'm a strategist. I'm a planner. I'm a thinker. I'm a strategic thinker. I'm always a planner. God is strategic. He had a plan. He had a plan for the world. He had a plan for the creation of the tabernacle. He had a plan. In fact, he told Solomon to build according to pattern. He told Moses to build according to pattern.

I was with my spiritual father, and we were in Florida, you know. And he pastors in Columbus, and we were in Florida, and we were ridin' around, and we was, you know, tryin' to chill a minute. And we were talkin' about this, that, and the other, and the phone rang. And he answered the phone, and it was somebody from back in Columbus, and they told him that his church had been vandalized and that they had vandalized the church, and they'd written all these obscenities on the wall, and they'd done this, and they'd done that. And he kept saying, "What"? You know? You know how he talk: "Whaaat"? "And, say what"? And I'm ridin' along, you know. I'm sayin', "Oh, God". And he's sayin', "What time did it happen? Did you call the police"? and da-da-da-da. I said, "Oh, God".

But, you know how, when you're listenin' on one end of the conversation, you kind of piece it together? You know, so I knew all our plans were over, you know, and I just knew. And so he got off the phone, you know. He hung up the phone. And he got to ridin', and I was waitin' on him to break it on down, you know. And he got to ridin', and he said, "I'm a get me some grapes". He said, this is, honest to God, the truth. He said, "I mean, I like them green ones, the seedless grapes". He said, "I wanna stop over there and get me..." I said, "You're gonna get some grapes"? I said, "They just vandalized the church and broke in the building, and you're goin' and you're worried about some..." and so I'm tryin' to follow him, you know.

He actually went to the grocery store. He even in the grocery store in the produce section, and I'm followin' behind him, going... 'cause I do not believe he's serious about these grapes! He's in there pickin' out grapes! And I said, "What in the world is with these grapes"? I said, "Didn't you hear all that stuff"? He said, "I can't do nothin' about that. They in Columbus. I'm in Florida. I'm a get me some grapes". Well, I said, "Well, bless God. I'm a get me some too. Maybe it's in the grapes".

I tell you, for about 2 months, I ate so many grapes, I almost... well. It's not the grapes. It's the peace. There are some things that only God can fix anyway. And if you stop being God, then God'll be God. But the moment you start steppin' in and try to be God, God says, "Okay. Since you're gonna be God," he said, "I'm gonna step back and let you be God". So what you do most of the time is you run things till you run 'em in a ditch. And then you cry for help. And then he says, "I was there all the time. I was waiting for you in the secret place".

Watch this, he wakes up out of his sleep. Walks up to the bow of the ship. Everything's going crazy. And watch this. He says, "Peace, be still"! And the winds and the waves lay down. How did he speak peace? You cannot speak what you don't dwell in. You cannot speak peace from a place of chaos, or depression, or anger, or suicide. So when the enemy attacks your mind, he knows you have no recourse because you have no peace. And so you can't speak peace because your spirit is manufacturing the problem. Jesus said, "I'm leavin', boys, but I'm a leave you my peace. I'm a leave you the stuff that allows you to sail through the storm asleep.

And, by the way, did you notice that we still got where we were goin'? Did you notice that? So God didn't promise to stop the storm. He didn't promise to steer you around every storm. But he said, "I'll give you peace in the midst of a storm". Now, as I close this, God said, "I need you to dwell in a place of peace so I can talk to you. And I will show you what to do next if you'll just calm down and trust me. I'm waiting on you in the peace. Not the peace of the world. You keep tryin' to get everything to calm down so you can calm down. My peace give I unto thee, not as the world giveth".

If you're tired of operating in a peace that's up today and down tomorrow and in and out and frantic and schizophrenic, Jesus said, "I'll trade with ya. You give me your sometime in peace; I'll give you my full-time peace. You give me your occasional peace; I'll give you my abiding peace". Have you ever noticed that, when God came down to meet Adam, he came to a peaceful place? And then he asked Adam a question. He said, "Where art thou? I was waiting for you in the peace". Now, this message won't hit everybody, and that's okay. But for somebody this morning, the Lord is comin' to the garden, and he's waiting on you in the peace.

Gotta stop right there. It's been a real joy to share the Word of the Lord with you. The enemy doesn't want you to have peace. The more you worry, the more the enemy wins. There are some things only God can fix. If you stop being God, then God can be God. I pray that God will bless you and strengthen you and that the Word of God would be so strong in you that you would trade your peace for his and let it dwell in your heart by faith.