TD Jakes — This is The Place 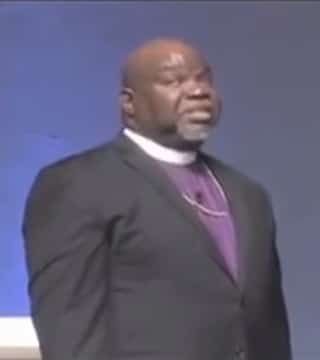 Greetings, brothers and sisters, I greet you in the name of our Lord and Savior Jesus Christ. I'm excited to continue our conversation from the series open doors. God is absolutely opening doors. I want you to go into the place where God has opened a door for you. That is the potter's house of fort worth. I tell you what I did. I split my own church. I began to understand God is using other people in other areas and there were areas God laid on my heart. I'll show them one of you right in fort worth where the stats were really appalling and pastor has gone there to do a work for God.

I preached a message there I want to share with you. I sent some of our saints down there to the fort worth campus and sent others up to North Dallas Campus and we're spreading out so we can be more effective and develop a net through which we can win our city for Jesus Christ. So I want you to go to our campus location in fort worth and join me as pastor who is the new pastor of The Potter's House of fort worth. The message is This is The Place. How do you discern you're in the right place at the right time with the right people to experience a level of God you've never experienced before. Be careful before you walk out of it. It might be the place eternity and time collide. Take a look.

I used to think, I've been in church almost all my life. And when the service was really hot and really good and we were sitting beside my mother, old people were the only people that shouted when I was a child. But when Miss Nellie would shout and sister would join her, we would say God was in the place that day. We would walk back home around the road, past the corner, past the water towers, over to the house talking about God, o child you missed it. We would holler Miss Dean as we passed by her house. You missed it this morning. God was in the place. Sister Shirley would hit a high note and Chill Bumps would go down our spine. We would declare, God was in the place.

As a little boy, I measured the presence of God by the sensations I felt. But I ask you something this morning, if that be true, then where is God when you feel nothing? If the manifestation of God is proven by the movement of flesh, where is God when you can't move and you can't feel and you can't see. I had to grow in my faith. I love what pastor is saying when he said, I'm wiser. I learned not to measure the presence of God by the circumstances of men. I learned to realize that God, that I wasn't anymore anointed when I had money than I was when I didn't have money. Ya'll don't hear what I'm saying. I learned I was just as anointed with no job as I was with a job. That I could be anointed when people didn't like me. That it didn't take public consensus in order to give me approval and desire of the moment. I learned to not measure God on chill bumps, sensations, lights on, belly full of food. I learned how to walk with God. You have to learn.

You don't come here knowing this. Even apostle Paul said, I have learned how to be clothed. How to be naked. How to abase, how to abound. You don't get saved and know this. It takes a few classes for you to figure this out. You have to come up on some hard time to feel that everybody has forsaken you and you are living in the convergence of all hell breaking loose from all directions. And yet, God.

So I know, I know you show up in church. Where two or three are gathering together in his name. I'm he'll show up in church. I know he'll show up when singers sing like they did today. Glory falling. You know God will show up when you got that kind of talent. But the test has not come in the display of talent. The test does not come when the lights are on and the saints are gathered and the ushers are ushering and the choir is singing. No. The test comes when all hell runs into all crisis and all dilemmas converge on you. And you are tired.

Brother Marvin talking about adolescent children and my spirit grown when he said it. Anybody who ever raised adolescent children know that's not something you enjoy. It's something you survive. They don't know who you are. They don't know who they are. They can't figure out. But you do expect that from adolescent. But have you ever sign grown people who still... 40 years old and you still a mystery. 52 and you still shock yourself.

Jacob was a grown man. And still I saw this. His daddy knew who he was. His grandfather knew who he was. Jacob, he wasn't quite sure. He had to fight all his life. Come here fighting. Fighting in his mama's belly. Been fighting all of his life. Been war all of his life. Everything he ever got in life he had to fight for it and sneak for it and pull for it. We had to call every kind of idea and favor he could get.

Jacob was slick. He was not slick because he was a bad person. He was just slick if he wasn't slick it didn't happen. Slickness was all he knew. All his mama knew. All his uncle knew. Run through the family. He was just slick. Don't act like you don't understand. Because there is a thing called church slick. Don't you sit there with your little bonnet on and act like you're so holy that you don't understand slick folk. Borrow money they never intend to pay back. Slick folk. Tell your husband they need prayer. You know that girl don't want no prayer. Slick.

Tiredness. And in the confusion and in the instability of his circumstance, it was night. And he could not see his way clear. When night comes, you cannot see your way clear. You know, if you can see your way clear, you can deal with about anything. But when it's dark, and you can't see any brightness ahead of you, and you're tired, and you're confused. And you're going through a blackout period, that is the environment for which this text is extrapolated. It's dark. He's confused. He's tired. It's night. He's kind of desperate tired.

Sometimes you make the bed and you just got to lay in it. You picked that man. You took that job. You bought that secondhand car. Have you ever had to lay in the bed you made? Jacob moved the rocks around. Made the best of a bad situation. Laid his head on a rock. And fell asleep. In a hard place. Laying in a hard place. He goes to sleep. And God appeared.

You don't understand. This rock, this rock is not just a rock. This rock is Jesus. This pillow will become the pillar of your experience in God when you see it correctly. You can be it correctly. But you cannot be it if you just see it as a pillow. It's got to become a pillow of your faith. This is the place! And the rock is Jesus. And whenever you put your mind on the rock, the heavens will always open up. If you ever lay your head, the Bible says thou will keep him in perfect peace whose mind will stay on thee. I dare you to drag your weary head and lay it on the rock. Lay it on the rock. The heavens, my God I feel the anointing of the Holy Ghost. The heavens will open up. Touch three people and say, something is about to open up for you, baby. Something is about to open up. Don't give up. Don't give in. Don't give out. Something is about to open up for you. You're in the right place. You have the right time. Ain't no time to give up. Don't give up.