TD Jakes — The Principles of Provocation 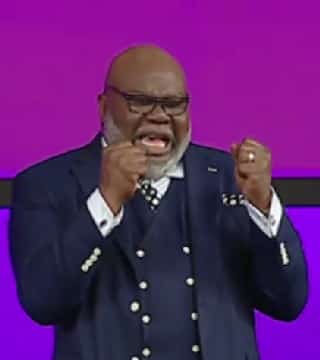 Today, we're going to take a look at the principles of provocation. There is a reason you have been provoked, and often God uses some of the most unlikely people to get the job done. Take a look at this. You're going to be blessed.

Elkanah had two wives. The Bible says, "And Elkanah had two wives, and one of them's name was Hannah, and the other one's name was Peninnah, and Hannah was happy and satisfied and comfortable and contented and relaxed, but God didn't want her to be comfortable and contented and satisfied and relaxed. "Why not, Bishop"? Because Hannah's womb was shut up, and she couldn't have children. There was some condition in her body that would not allow her to conceive. God didn't heal the condition. He provoked. There is nothing as irritating as being provoked once you have decided, "Maybe this is not for me. Maybe I'm not supposed to have it. Maybe it's not God's will to be in my life. Maybe I'm supposed to be alone. Maybe I'm supposed to be by myself. Maybe I'm supposed to be down like this. Maybe I'll never be happy".

See, flesh will make a deal to keep you from being provoked, to stretch into the next dimension. Flesh will talk you out of faith. It will talk you out of the uncomfortableness of believing God that your life does not have to be the way that it is. Even though you got used to it doesn't mean it's God's will for your life. Elkanah had two wives. Hannah was good with it. Lord have mercy. I ain't gonna bother that. I'm gonna walk right past that like I didn't even see it. Hannah was good with it.

Have you ever been in a place that you didn't belong, that you didn't fit, and you didn't have the credentials or the qualifications or the status to be there, and you were wondering, "Why am I here"? Let me tell you why: to provoke you. The more Peninnah got pregnant, the more Hannah got depressed. Now Hannah walking around like this. She not sick. She not broke. Everything that she was happy about is still there, but now she's upset. Elkanah says, "Girl, woman, what's wrong with you"? "I don't have no children". He says, "Am I not better to thee than ten sons? Isn't it enough to be married to me"?

So, the woman who couldn't get pregnant with a fertile man now goes to an invisible God and says, "God, I'm not satisfied. I got all of these tents, I got all of this stuff, I got a man who loves me, I got a man who blessed me so good, he's given me a double portion, but what I want he can't give me". And she's in there praying and crying out to God, and when the priest comes in, he looks at her, and he misunderstands what she's doing, and he calls her a drunk woman. Now, to all of you conservative, refined people who refrain from any kind of expression, if Hannah would have been sitting there like this, nobody would think she was drunk. She must have been staggering. She must have been stumbling around a little bit. She must have been murmuring around in the church and staggering like...

When you want something bad enough that you stop worrying about your image and stop worrying about what you look like and stop worrying about what people think about you, God will open up the windows of heaven and pour you out a blessing you won't have room enough to receive. I'm gonna give you 30 seconds to give him a drunk praise. Tell your neighbor, "I'm about to get drunk. If you don't like drunk people, you better move away from me. I'm about to stagger in the presence of the Lord. I'm about to lift my voice and shout to God, 'Hallelujah. Hallelujah. Hallelujah.'" "I want this thing. Whatever it takes. Whatever I gotta do. Whatever I gotta say. I won't let you go till you bless".

I gotta close right now, but when I think of the goodness of Jesus and all that he's done, my soul cries out. Say what? Tell your neighbor, "This is crazy. This is absolutely crazy. I'm about to be fruitful in a place I was barren". God is about to give you an ain't-supposed-to-be miracle, something they said you would never have, but if God be for you...

In the Bible days when a woman gave birth to a promise, she would sing. When Mary was pregnant with Jesus, she sang a song to the Lord. When Hannah got pregnant with Samuel, she sang a song to the Lord. Watch this, so the Bible says he reverses it. The pregnant woman is supposed to sing, but Isaiah said, "Sing, thou barren woman". Sing, the woman whose doors are shut. Sing when you can't see a way out. Sing when things are getting worse instead of better. Sing, thou barren woman. Sing, for the children of the barren woman shall be more than the children of the married wife. In other words, the very one that looked like they wasn't gonna get it is the very one that's going to get it. Sing, thou barren...

If there is any area in your life that's shut up, that's not working for you, that will not open, the Lord just said, "Sing, thou barren woman". Sing, thou barren woman. Sing in that barren house. I prophesy to you the children of the barren woman shall be more, that's what the book said, than the children of the married wife. God said, "I'm gonna do so much with the Gentiles," who were barren. "That I'm going to provoke my people to jealousy". So, I really didn't come to preach to the person who's got everything. I came to preach to the person who's barren in some area of your life. I came to tell you that the tail is gonna become the head, that the last shall be first, that the stones that the builders rejected... and if you have the faith to stand there in your barrenness and give God a praise like it's already done...

So, as I close my third time, we're gonna inform, we're gonna inspire, we're gonna impart, and the children of the barren woman shall be more than the children of the married wife. We're outta time. Thank you for joining us today. Isn't it interesting that God loves us so much that he's willing to provoke us? Just when you've decided that you're never going to amount to what you thought you'd be, God will use someone else and their blessing to show you what is yet possible. He'll allow you to smell it in order to ignite a hunger inside of you. Now, don't become envious. Instead, become determined and make a move by faith. Everything God has for you, you can still have. Move, and watch God respond in ways that will utterly blow your mind.