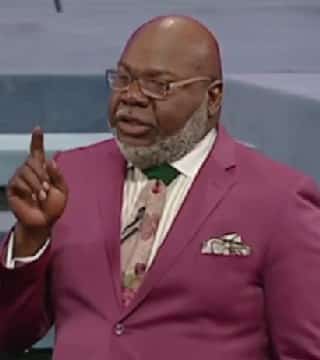 The text comes from Jairus's daughter. Jairus is a rich young ruler who has a daughter who has fallen sick, and he does the thing that only rich people really understand. He uses his strength against his weakness. If he were poor, he might not have been able to immediately get access and travel to Jesus. But when you have money, you can get to folks that poor folks can't get to. You can get people in your Rolodex, in your phone... you know I'm old. I say, "Rolodex". In your phone that you couldn't get, that other people couldn't get an appointment with in ten years. You could text 'em right now and you have access.

Jairus had access to Jesus. He could get to Jesus, and he went to Jesus and says, "My daughter's at the point of death, and I need you to go fix it". Nothing makes you feel weak like when your kids are hurtin', nothin'. It is like kryptonite. And vulnerability. You feel helpless. You feel worried. He had enough money to get to Jesus, but his money wouldn't heal. She was at the point of death, and he went for Jesus. And he gets Jesus, and Jesus immediately drops everything and he's going to Jairus's house. A house call from Jesus is a pretty big deal.

Now, I wrote down some things that were common between the woman and the girl because on one hand, you got this dead girl layin' here, who's sick and dies at 12. That's one little girl, one generation, one reality. On the other hand, we have this woman who has been sick 12 long years. And the girl has an appointment, and the woman does not. So both cases were terminally ill. Both were in crisis mode.Both of them had no cure for what was wrong with them. Both of them were terminally ill. Both of them were locked away from normalcy.

This woman wasn't goin' out. She wasn't hangin' out with the women, washin' clothes down at the riverbank. They weren't hangin' out at the women's spa. They weren't doin' stuff, because sickness disconnects you from society. You don't believe it, go up to the hospital. The people in the hospital are havin' a whole different reality. They live in Dallas, but they don't live in them. When you start hangin' out in hospitals, you find a world that you've been drivin' past, that you didn't even know existed because sickness always separates you from normalcy.

Please hear what I'm sayin' 'cause I'm sayin' somethin' while I'm sayin' somethin'. Whenever there's somethin' sick in you, you will always isolate from other people because of your sickness, and you will live in a ward, and only feel comfortable around people who have the same disease. You wanna know what's wrong with you? Look at your friends. See, what we want, if we can't get change, we wanna feel comfortable. And anytime we don't feel comfortable, we are alienated. Both of them, the woman and the girl, are shut off from the world. Watch the devil that wants to shut you off from the world because the more he shuts you off, the closer he's comin' in for the kill. Both of them were beyond the power of capital. They couldn't give a command.

And Jairus's daughter, if her father could have given a command, he would have commanded her to be healed, but he couldn't do it. Life will always present somethin' before you that leaves you vulnerable, that throws you off. No matter what your advantages are, you will always be tested in an area that you cannot fix by yourself. And some people would rather die alone than go for help because their pride will not allow them to admit that "this is too big for me".

Both of them were untouchable. You see, the law said that as a Priest, Jesus couldn't touch a bleeding woman. It would make him unclean. The woman herself was declared unclean. She was untouchable. Nobody touched her. He couldn't touch the dead girl. He was a priest. Nobody touched this woman. This woman decided, "Whatever I have to do, whatever it takes, I'm all in. If I gotta crawl on my belly, if I have to walk up behind him, if I have to catch him while he's lookin' at some other woman, all I want, all I need, I don't wanna shake his hand. I don't need a autograph. I don't need a selfie. If I can..."

The reason I wanted to preach about this little girl, because she is the star of the text to me. I told you what was alike about 'em. Let me tell you what's different. Whatever's wrong with her is so bad that she has stopped reachin' out. There comes a place in your life where things get so bad that you stop reachin' out. And I called it "A Personal Touch" because it wouldn't be personal if he didn't come to the house. If it was done in church, it wouldn't be personal. If the only experience you have with God is in your church, then you don't have a personal relationship with Jesus.

Jesus came to this girl's house and he put everybody out the room. Them people around you are not good for you. I'm tellin' you right now, they are not good for you. He put everybody out of the room. Some of you are in a situation right now where everybody's been removed from your life. It's because God's gettin' ready to do a personal touch. This is what's amazin'. Maybe Jesus could say as a Priest, you must realize, maybe Jesus could say that what she did was not his fault because what she did was illegal. The Bible says that she was forbidden to touch anyone. She broke a law to get hers. She broke a rule. She broke protocol. She broke all order.

But maybe Jesus could say, "Well, that's not my fault 'cause I didn't even see her coming. She walked up behind me and she took it while I wasn't looking". But this girl here, Jesus now breaks a law... because he regards people more than principles. Some of you watchin' right now, you are so principled, you got so many rules, you got so many orders, you got so many thou shalts and thou shalt nots that you're willing to kill people to keep your principles, and you do it in the name of a Jesus who broke the principle to save the person. Whatever it takes.

Jesus now has a decision. "Do I keep the law and lose the child? Or do I keep the child and break out of the law"? The law said, "Don't touch her". The law said, "Don't use her. Don't get near her. Don't connect with her". The law says he shouldn't be dealing with you. If he would go by the book, you wouldn't even be sittin' here right now. If God would regard iniquity, you wouldn't even be where you are right now. He broke a law to get you. Shake yourself, you got somethin' to thank God for. He broke a law to get you. He called you. He didn't need your talent. He didn't need your money. He didn't need nothin' about ya. He looked over your faults, saw your need.

And so the text about the woman, everybody preaches that. They preach about the first touch, but the second touch, they don't say nothin' about this second touch. They preach about the woman who touched Jesus, and they never say nothin' about the woman Jesus touched. The woman Jesus touched represents potential. She represents the future. She represents possibilities. This girl is 12 years old. "Yes, Lord". She has not accomplished her dreams. She got sick, sayin', "Well, maybe I'm not. Maybe I won't. Maybe I can't. Maybe it's not for me. Maybe I'm not supposed to". As she's dyin', she's talkin' herself out of her dreams and out of her future because she can't get up. And the Bible said he came and he took her... By the hand... And stood her up on her feet.