TD Jakes - The Discipline of Doing 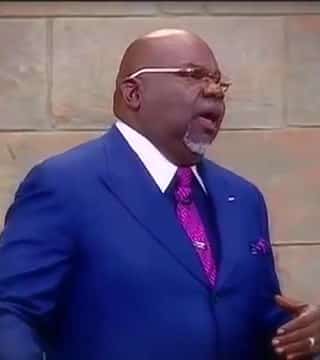 A lot of times in Scripture, to bring out scriptural revelation, the metaphors are often agricultural. "Whatsoever a man soweth, that shall he also reap". Agriculture terms. "There will always be day and night, seed time and harvest". "Except a grain of wheat fall into the ground and die, it abide alone, but if it die it bringeth forth much fruit". Agricultural terms. Occasionally, God uses architectural terms. Architectural terms imply that there is going to be a lot of work involved in order for there to be a building. It's one thing to plant a seed and watch it grow. It's another thing to build something from the ground up. There's gonna be some sweat equity, there's going to be some work involved. There's gonna be some tenacity required in order to build something from the ground up.

People don't like building too much. They don't like building too much. They kind of like to buy something, you know? Buy something ready, ready, just move in, turn the lights on, "I'm ready". Building can be stressful. I heard my pastor when I was a little boy, they built the church up on Vandeggen. He, after he did it once he said he would never do it again. He said, "Building is for young men," and I didn't know what he meant. But I understand now what he meant. And if you don't understand it, you haven't built nothing. By the time you get through going through the stress and the headache and the aggravation and the disappointments and the regulations and the committees and the zonings and the permits and the runaway contractors and you have to be up for the task if you're gonna build.

It is the process that gives you the power. It is the rejection and the alienation and the intimidation that drives you down to your knees when you say, "I thought I had this and I thought I had that and I thought I had the other. But if Mama don't go, if Daddy don't go, if sister, brother, don't go". So he says, "When you do it," he said, "doing is digging. Doing is digging". If you look at the text, doing is digging. He said, "When you do the Word, you are like the man who dug down to the rock". When you start doing what God tells you to do, there is an inevitable digging process where everything that isn't solid has to get out of your way for you to be able to do what, this is the process when friends leave.

The discipline of doing says there is no shortcut to excellence. You just can't fast-track it. In this instant age we live in, we have lost any understanding of slow preparation. In this microwave, shake-n-bake, 30-minute quick serve, soup-in-a-cup generation, we have lost all sense. I bet you at least 30% of the people in here have never tasted a slow-cooked grit. They don't even know, they have never had anything but instant oatmeal. I bet you 30% of the people in the room have never had anything but Jiffy cornbread. In this Jiffy, instant, quick, easy serve age, when you get into something that requires slow cooking and stability, you think that the devil has gotten loose in your life. "But they that wait upon the Lord".

Now, imagine, his neighbor across the street is building twice as fast because his neighbor across the street, he just started building straight up. Didn't dig it out, didn't dig it out. Just started building up. I realize now that there wasn't so much difference in the soil. The difference was in the prep. I used to say, "One man builds his house on the sand, and the other man built it on the rock, but I overlooked the fact that the guy who built on the rock did not build on the rock because the rock was there, he built on the rock 'cause he dug to the rock.

So you can build a rocky house in a sandy place. Oh, you don't see. See, I used to think this was a soil test but when I realized that the man who built on the rock had to dig to hit it, I realized that this test is not about soils. Neither one of them found the soil conducive to build what they were trying to build. It's just that one man was willing to dig down and the other man was impatient and wanted to go up. See, the guy who built the house on the sand had the option of building it on the rock if he was gonna put the discipline in to dig down deep enough. Somewhere beneath the sandy shore there will always be rock but most people don't have the discipline to deal with the sandy stuff to get to the rock in you. If you don't come prepackaged, they get rid of you because there's too much work.

I don't know who I'm preaching to but I feel like I'm talking to somebody in this room. God is saying it is worth it to hit the rock. It is worth it to look bad for a little while and come up looking good for a lifetime than to look good for a minute and come down in a flash. Ohh, slap your neighbor and say, "It's worth it". It's worth it. I learned in the doing. I learned in the struggling. My strength tolerance increases. My ability to handle pain increases. My wisdom increases. My ability to deal with haters increases. I'm tougher now. I'm stronger now. I got more fight, got more fire, got more wisdom. I wish there was somebody in this room. I need some slow-cooked people in this room. I need some people that have been through hell and back.