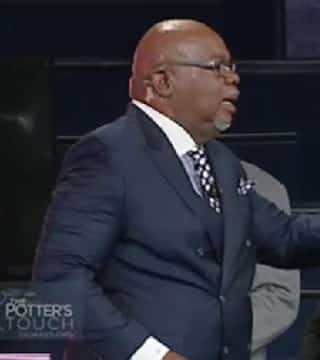 I looked at this text and I thought it was interesting that it starts with a bite, and it ends with a question begging for a cure. It reminded me of Numbers. You remember over in Numbers, when the children of Israel were going through the wilderness, and the Bible said that God allowed the cockatrice and the serpents to bite them. And Moses began to step over the diseased, and infected, and swollen, and dying, and he asked God for a cure. And they went over in Numbers 21, glory to God. Verse number 6 I think. Yeah, "The Lord sent fiery serpents among the people, and they bit the people, and much people of Israel died.

Therefore the people came to Moses and said, 'We have sinned.'" See, they didn't say they had sinned till they started dying. See, that's the way people do is only when push comes to shove do people start confessing, "We got a problem. It's bad, it's a bad thing". Trouble will make you be honest. Trouble will make you stop lying. Oh, y'all not going to talk to me. You got to act like you don't know what I'm talking about. When it gets hot enough in there, you say, "Oh, yeah, yeah, we have sinned. For we have spoken against the Lord and we have spoken against you, Moses. We've spoken against God, we've spoken against leadership, and now we're laid here bit up and swollen. We was talking about you, but pray for us. We made your life miserable, but pray for us. We kept you up at night, but pray for us. Pray unto the Lord that he take away the serpents from us".

Moses is praying about snakes to get them out, to drive them away. And God said to Moses, "Make one. Make thee a fiery..." No, Lord, you didn't understand. I'm trying to get rid of snakes, and you're asking me to make one. He says, "'Make thee a fiery serpent and set it upon a pole, and it shall come to pass that every one that is bitten, when he looketh upon it, shall live.' And Moses made a serpent of brass". Don't overlook that. He made a serpent of brass. In order to make a serpent of brass, you have to take the brass and beat it. You have to beat the brass into the shape of the snake. This is what Isaiah will later mean when he says, "He was wounded for our transgressions. He was bruised for our inequity".

Moses lifted up the serpent that was beaten so that anything that had been bitten could look on the serpent that was beaten... oh, you'll get it when you get home. And find life. "And it came to pass that if a serpent had bitten any man, when he beheld the serpent of brass, he lived". He lived. Why in the world would God have him beat the brass into the very thing I'm trying to get over? Why didn't he have me make it into an angel? Why didn't he have me make it into a dove or some holy symbol? We have all kinds of holy symbols in Scripture. Why would he beat it into a serpent? A serpent is a wicked thing. A serpent is a slithering, crawling thing. A serpent is a cursed thing.

The first time we ever read about a serpent, he is in the garden, slithering down the path toward Eve, beguiling her, offering her suggestions. The serpent in the garden didn't bite her, but he bit her thinking with his suggestions. Any time the enemy could get in your head, he has gotten into your system with his suggestions. That is not what God said. He has come against her knowledge of God. If you will notice, whenever the enemy attacks you, he comes against what you know about God.

I'm going to help you find this snake. If God said you're healed, the enemy will come up and say, "You're going to die. You're not going to make it". If God said you're free, the enemy will slither up and say, "You're not really free. You're a fake and you're phony. You know you're not free. You know what you thought about the other day". He's trying to get his venom inside of you, his poison inside of you, his doubt inside. For the weapons of our warfare are not carnal, but mighty through God. You got to pull that thing out. He has used a snake against Moses. You're praying to get rid of the snakes. Make one. Make a snake, and everyone who looks to the beaten snake will recover from being bitten by a snake.

The serum solution is interesting because you would think that God would use right against wrong, good against evil. But he uses evil against evil, he uses sin against sin. Wait, wait a minute. The Lord tried to do it. "The law of the Lord is perfect," the Bible said, "converting the soul". But the law could not do what the law could not do in that it was weak through the flesh. God sending his Son in the likeness, oh, of sinful flesh. Oh, you just got it. See, God sent his Son in the likeness, in the shape of the very thing he came to destroy. He took on him the form. I heard Jesus say, "Even as Moses lifted up the serpent in the wilderness, so shall the Son of Man be lifted up. And if I, if I be lifted up from the earth, I'll..."

Jesus became sin to save the sinner. Wait a minute, I'm going somewhere. See, you got to understand... I never could understand this. The Bible says, watch this, "There is no temptation taken you but such as is common to man. But God is faithful, who will not suffer you to be tempted above that which we are able," watch this, "but with the temptation, also make a way of escape".

I didn't realize that the same thing that came to tempt me also has a way of escape because the serum is made from the venom. So, they meant it for evil, but God made... I didn't understand that when Goliath came down to fight David, and he brought his sword to kill David, that the same sword that he was going to kill--became the sword that cut off... I'm trying to tell you what they meant against you, God is going to take that same... the serum is made from the venom. Moses was somebody's serum, even though he was somebody's venom.

Y'all can't handle this. Aaron was dancing naked around a calf. Pastor Moses had gone up on the mountaintop, and Aaron looked down at the bottom of the mountain dancing naked with the whole congregation, getting their freak on. While they were dancing naked, God was designing his priest garment because God will always make the serum out of the venom. He said, "Moses, I got one man that I'm going to use as high priest". "Who is the man, Lord"? "You see that brother down there dancing naked around the calf? I'm going to make him the one man that has access to the Holy of Holies. He's naked right now, but I'm making clothes for him".

I don't know who I'm preaching to, but I'm talking to somebody. Jesus was a serum solution. He became sin who knew no sin that we might become the righteousness of God in Christ Jesus. Peter was a serum solution. "Peter, I'm going to use you greatly, but before I use you, you're going to deny me. You're going to deny my so bad that you're afraid to come back". When Jesus rises up from the dead, he says, "Tell them to meet me in Galilee, and get Peter too. Old backslidden Peter, who was cussing while they were trying to kill me, the very one that messed up, he's going to do the inaugural address on the day of Pentecost". Tell Peter I know you've been bit, but the serum is made from the venom.

I don't know who I'm talking to in here, but the devil told you that God could never use you, but the devil is a liar. Give God 60 seconds of crazy praise. The Apostle Paul was the Saddam Hussein of the New Testament church. He went from city to city, he was a terrorist, he was a Christian killer. God caught him on the road to Damascus and said, "You think you are venom, but I am going to make my serum out of you". He led him away blind and made him the greatest apostle of the New Testament church.