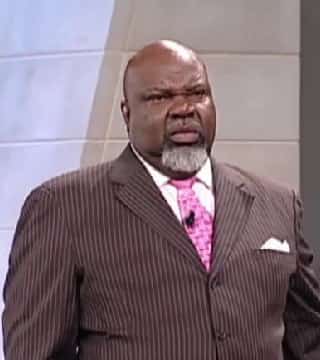 Greetings in the name of Jesus Christ our King. I'm Bishop T.D. Jakes, the senior pastor of The Potter's House right here in Dallas, Texas, and I wanna welcome you to "The Potter's Touch" today because we've got an exciting word from the Lord that we want to share with you. The message is called "Secret Agent of Change". Now understand we are all in the process of change. God often does his work while we are in transition. It's almost like he's workin' while we're walking, and you think, you know, won't you just wait? No, no, no, in the middle of the most uncomfortable moments of your life God is always up to something, so the message today is the "Secret Agent of Change". I pray that it will touch you, and I'll be back at the end to share more. God bless.

I might remind you just in a way of review of understanding that God had manipulated Joseph's entire life to put him in a position so that when his siblings and his father faced famine Joseph would be strategically placed in a position to influence and change their family. He was a bit of a forerunner. You might remember, in fact, that he had gone through adversity and been rejected from his brethren, and his coat had been ripped away from him. He'd been thrown into a pit and then worked in Potiphar's house. And he was lied on in the house of Potiphar and had to flee there and ended up in prison and in jail for something he didn't do, stayed in jail and served God in jail, and finally justice prevailed. He was eradicated out of his element and placed back up into a place of prominence beyond what had preceded him.

People talk about God bringing you back to where you were. I don't wanna go back to where I came from. I wanna be better than where I was before. Joseph gifts made room for him and put him in a place of prominence, and it was shocking that one day he was an inmate, and the next day he is basically over the entire financial doings of the nation of Egypt. Famine broke out! Famine, dead bodies in the street and nobody well enough to bury them. Sickness and plagues, disease, and catastrophe became so overwhelming that it pushed Jacob out of his country and away from his people and forced him down into Egypt, and Jacob goes down into Egypt, thinking that his son is dead and his other son is dead and his life is over only to find out that God has strategically placed somebody on the inside for such a time as this.

God can do mighty things with one person, and Joseph got in a position of power, and he was there, the Bible says, for posterity so that he could influence his descendants, and he changed the course of nature. He changed the course of nature. He broke generational curses. He delivered his whole family into a new position and a new place in life, and they were all blessed because of him. They come into Egypt about to faint. They have lost everything. The famine is grievous and intense, and they come into Egypt and have an emotional experience because the person that God put in power was somebody they had mistreated.

So, yeah, moved him to a position, and through that position the whole family comes into a transition of blessings and peace and tranquility. And they have food, and they have water. And they have merriment, and they have celebration, and they have a place to stay in Egypt. And everything was going well. Everything was going wonderful until Pharaoh died and Joseph died, and there arose up a Pharaoh who knew not Joseph nor his God. When he first rose in power, nothing changed. Everything remained the same, but once he got settled into his position of prominence he started thinking. And looking out over Egypt he saw the Israelites and said, "Hmm, sure is a whole lot of them, maybe more than it is of us. Let's deal wisely with them".

I wanna pause there for a moment because you don't always get to know when people change their mind about you. It's not like an alarm goes off, a bell rings, a flashing light says, "Warning, warning, warning. Things are changin'. This person's changing. They switched on you". There's no announcement. They just change. The Bible says that about Jesus that Satan entered the heart of Judas Iscariot. It doesn't say when, somewhere along the way, maybe in a worship service, maybe at a Passover dinner, maybe at an after-hours fellowship. He just looked at him and switched. Have you ever had people switch on you?

You see, when we read the text, it almost sounds like the children of Israel knew what the new Pharaoh was thinking, but they weren't there when he thought it, and God does not promise you that you will be privy to every change that happens in your life, changes that affect you, changes that disrupt your life, changes that take you out of your comfort zone. People just switch. That's why you can't get drunk off of people. You cannot do it because the same person who says, "Hosanna," today will say, "Crucify him".

I don't know, maybe you don't. I do when I get in enough trouble. A little bit of trouble I'm okay, but if it gets bad enough I get this whole feeling. I don't wanna hear no happy music. I wanna hear sad stuff, and I wear dark colors, and I don't wash my face and don't brush my teeth. I just sit up and let my breath stink and look bad and mad and evil 'cause I'm goin' through a bad... I know ya'll don't do nothin' like that, but I goin' through a bad time I don't feel like wearin' no bright colors! I don't feel like smilin'! I ignore telephone calls that would make me laugh! I don't wanna talk to you! I'm not feeling good! I'm upset! There I am in this hellish situation because things have changed, and I feel sorry for myself, and I feel like I'm the victim. I never understood that the test is a compliment. I never saw it as a compliment.

I was asking God why. I said, "Lord, how come you let a Pharaoh rise up who did not know Joseph nor you"? And he said, "Because I had blessed them as much as I could bless them with a Pharaoh who was doin' 'em a favor". He said, "For my people not only do I have people workin' for you who like you. When I really get ready to bless you I'll make your enemies your footstool, so when you see your enemy get a little power, don't be nervous because your enemy is my secret agent, and the more they curse you!

Look, let me show you this real quick, and I'm gonna go. He said, "If the Pharaohs in power had continued to like them the Israelites would have lost consciousness to who they were. They would've thought they were one of the Egyptians, and they would have married them and embraced them and lost their identity". So he said, "My direction often comes through your rejection". They didn't reject you because they were evil. I told them to reject you! I made them reject you lest you be comfortable to see them as your source! I wanted them to reject you so that you would understand it was never them that blessed you in the first place! It was always me.

They went into Egypt a family. It wasn't but 70 of 'em when they went in. Egypt was a place of incubation. Incubators are where you put babies to finish their development. God said, "I will put you in certain situations to finish your development. I can only do so much as long as you're refrigerated, but if you'll trust me in the fire I have not forgotten my promise, I swear! God said, "I swear I'm gonna bless you"! You have to decide, are you gonna believe the blessing or believe the bricks? If you believe the hard bricks you'll give up on the blessing! But don't let the brick fool ya! I swear I'm gonna bless you.

So watch this. They went into it 70 souls. They came out of it over a million people. Because they were demoted and treated like slaves they had no access to entertainment, no access to fun, no access to simplicity. All they had when they finally got off was each other. When they finally got off work, they didn't have nothin' but each other, nowhere to go, little bit of time, and you know how poor folks have fun. Pray for me, mother. I'm gonna hold it right here. I ain't goin' no further than that. I'm gonna hold it right there. He that has an ear, let him hear what the Spirit is sayin' to the church. This is the fun that poor folk can always afford. Don't need no popcorn. Don't need no ticket. Don't need no reservations.

And so the Bible said the more that he afflicted them the more they grew. God put them in a situation and used his secret agent to make the condition right for them to multiply, and I'm gonna close with this 'cause I'm outta time, but I'm gonna close with this. He said he incubates your greatness through your frustrations. The more frustrating the environment, the more fruitful the individual. I don't know what that means, but whoever that is up there screamin', they know exactly what I'm talkin' about. Something they've been prayin' about, something they've been dealing with, they just got an answer to.

Let me explain to you the difference between multiplication and addition. See, you don't have to be able to multiply to figure out nine times nine. All you gotta do is write down nine nines and add. You'll get to the same answer. It just takes longer. So they teach you how to add first, and then they teach you how to multiply because multiplication is addition on steroids. It just means that when it says he multiplied them, it means you're gonna get to the answer quicker. And whoever I'm preaching to, for what God's gonna do in your life he said he's not gonna add to you! He's gonna multiply in your life! Slap your neighbor, and say, "It's gonna be quick. It's gonna be fast. It's gonna be sudden. It's gonna be immediately". Praise God for a quick answer!

I've gotta close. It's been a real joy to talk to you because I know you're goin' through changes, and I'm going through changes. You cannot live on this planet and not be goin' through changes, and yet God is faithful in the midst of it all. To move us expeditiously to an expected end, that's what Jeremiah said, that we might have an expected end. So stop worrying about an unexpected end and livin' with anxiety and pressure. Get rid of all that stuff, and just know that when God gets through working in your life that all things are gonna work together to bring you to the place that he showed you and that he promised you. It will come to pass. You know why? Because you're a child of destiny. I wanna encourage you to hold onto your faith and use it in the midst of the turbulence of life because we are secret agents of change.